Mokuhanga isn't a common word, at least not outside of Japan. But for the increasing number of artists who practice it, mokuhanga is practically a cult — in a good way. An extraordinary exhibition at the Southern Vermont Art Center in Manchester, "The World Between the Block and the Paper," shows why. And as that somewhat esoteric title hints, it is an exhibition of wood-block prints — a staggering variety of them. The "world" refers to the myriad possibilities in the moment when carved, inked wood speaks to paper.

The profusion of works on view belies how quickly the show came together — since September 2021, according to cocurator Patty Hudak. The Underhill artist is the only Vermonter, and one of three Americans, in an international collective called Mokuhanga Sisters. The eight women met through a couple of residencies, in 2017 and 2019, at the Mokuhanga Innovation Laboratory, or Mi-Lab, at the foot of Mount Fuji.

"We lived, ate and worked together, and our ideas about art, printmaking and life flowed between us freely," Hudak describes in a written statement. "It was an open studio, so there was cross pollination between all of us as artists."

The distinctively Japanese protocol of mutual respect permeates this exhibition. tweet this

That camaraderie has survived the pandemic: The artists — who live in the U.S., England, Ireland, Japan and Taiwan — have met on Zoom twice a month to continue their creative exchanges and sometimes share hard-to-find materials. Those connections made possible the SVAC exhibition and inform both its spirit and curatorial vision.

Each of the Mokuhanga Sisters contributed multiple prints of her own, and each invited another artist who is either teacher or student to participate. This arrangement honors both the past and future of the medium, Hudak observes. Five regional printmakers, not members of the collective, also were invited to submit works. The total number of prints is a whopping 174. 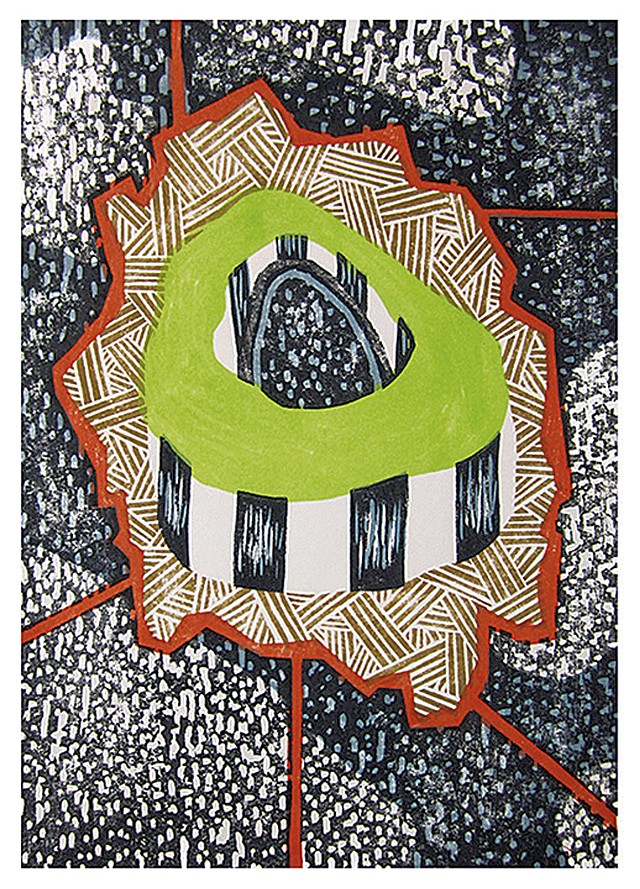 A not-to-be-missed installation in SVAC's library pays homage to the artists' mentors, as well as to artisans who handcraft the traditional tools used in mokuhanga. As surely as ink on paper, the distinctively Japanese protocol of mutual respect permeates this exhibition and leaves an indelible impression on the viewer. One sensei even advises his students to thank their brushes after a day of art making. It becomes evident why this "world" holds practitioners in thrall, despite its challenges.

To an outsider, the traditional printmaking process may seem simple or at least straightforward. To be sure, the requirements are relatively minimal: a slab of wood, a carving knife, papers (typically strong Japanese washi), ink, watercolors, rice glue and a pressing tool called a baren.

The elements missing from this list are not simple at all: painstaking skill at carving images on wood, which, as Hudak notes, combines drawing and sculpture; learning to direct the flow of inks and watercolors on paper; exacting registration of layers for multicolored prints. These tasks demand countless hours of practice and herculean persistence, to say nothing of having an artistic vision for the images in the first place.

Mokuhanga is not for the faint of heart.

A major advantage of the practice, however, is that all its elements are nontoxic and biodegradable. "By working with materials that are harmonious with nature, then we become more aware of ourselves as part of nature," Hudak writes. "There are no aggressive smells, no harmful chemicals; it is a peaceful process." She hopes that viewers of the exhibition notice and benefit from its natural feeling.

Hudak lived for 14 years in Asia — Hong Kong, China and Japan. She first discovered mokuhanga while living in Tokyo. Yet, she says, "Moving to Vermont has made me even more environmentally aware."

Most of Hudak's seven prints in the SVAC exhibition are based on a concentric circle pattern that she says took two weeks to carve. For some works, she created visually trippy collages with multiple printed circles. "Secret of the Flower," a 48-by-36-inch collage, is inspired by Carl Jung's "journeys into his own mind," she explains. But never mind the Swiss psychologist's consciousness; for a viewer, the imposed dimensionality and the rich black of sumi ink make Hudak's graphic compositions deeply absorbing.

Space does not permit a thorough review of this expansive show, so a few more selections will have to represent them.

In the first gallery space, a long table holds the Mokuhanga Sisters' collaborative project, "Borderless." Each member contributed a small sumi-ink print, intended to address concepts of borders and migration. British member Lucy May Schofield assembled the images into a horizontal scroll in an edition of 20. Delicate and elegant as a whole, the piece also showcases the distinctive styles of each artist.

"'Borderless' began as a way to sustain the energy and creativity of our residency meeting," Hudak writes, "but has evolved over time to become a scaffold of supportive friendship, artistic collaboration and shared humor." Particularly after COVID-19 arrived, the project helped to strengthen the bonds of artists living on different continents.

Korean artist Yoonmi Nam, who teaches at the University of Kansas, melds East and West in her series of delicately colored 24-by-36-inch prints. At first glance, the graceful arrangement of a cut flower or branch in a vase reads as stereotypically Asian. But the viewer quickly registers that her "vases" are a popcorn box, condiment jar or other disposable container. Nam wittily addresses impermanence, material culture and the human manipulation of both.

Nam invited her former student, Matthew Willie Garcia, to participate in "The World Between" because he has studied mokuhanga at the University of Kansas and in a monthlong workshop in Japan. In a short time, she writes, "he has solidly developed a unique visual language with this medium."

Garcia's prints are brilliantly colored, explosive and seemingly inspired by sci-fi comic books. But his is not the Marvel universe. "Matthew explores the idea of space-time as a metaphor for queerness," Nam explains in wall text. One of his 16-by-12-inch prints, in fact, is titled "Queering Space-Time."

New York-based Melissa Schulenberg also hews to the dramatic potential of mokuhanga. She fills the picture plane with saturated colors, cryptic enclosures and receptacles, and wallpaper-esque patterning. A lively 10-by-14-inch piece titled "Blast" has all these elements.

Mariko Jesse, who lives in Tokyo, contributed prints with dainty floral motifs. Her invited guest to the exhibition, Hidehiko Gotou, is a Japanese baren artisan and printmaker. His works — enigmatic abstractions with rich bokashi (gradations of hue) — could not be more different from Jesse's. "Yet, our works have a similar effect," she writes in wall text, "in that they are contemplative and calm, asking for a quiet space in your day."

Hudak brings this thinking back around to the chaotic world in which we live. "We have to turn more to nature," she says. "We just have to." With mokuhanga, she suggests, "I'm thinking about how to bring those feelings to others through art."