At the Junction of State and Federal Law, I-91 Checkpoint Becomes Site of Legal Collision 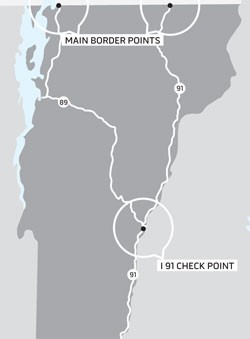 The Border Patrol claims a right to stop and search travelers without reasonable suspicion or a warrant within 100 miles of an international border. More than 90 percent of Vermonters live within that zone.

U.S. Sen. Patrick Leahy has long questioned the department’s habit of commandeering a rest stop off Interstate 91 in Hartford — 97 miles south of the Canadian border — where federal officers had the authority to inquire about destination and nationality and detain motorists for additional questioning. The senator even launched a formal inquiry.

Concern about the possibility of a permanent checkpoint was heightened last year when the Vermont chapter of the ACLU released documents showing that DHS had conducted detailed studies of dozens of locations in Vermont for potential sites. Privacy advocates warned the temporary one in Hartford had already infringed on the rights of innocent people, while turning up nothing more than minor drug infractions in the name of national security.

“The wide latitude in current law for setting up checkpoints far from our borders has led to maximum hassles of law-abiding local residents, with minimal value to border enforcement,” Leahy said recently. “This is an intrusive practice for local residents, subjecting Vermonters to needless and pointless delays and questioning. It simply is not a productive use of border enforcement dollars.”

Last week, DHS changed its tune — sort of. In response to Leahy’s inquiry, it informed his office in a letter that it had “completed a thorough review and analysis of operations at the I-91 temporary checkpoint and does not have any plans to construct a permanent checkpoint in Vermont.”

But it wasn’t a total surrender. Sporadic checkpoint operations may continue.

“A key objective of the Border Patrol’s strategic plan is to identify risk as threats along the border continue to evolve,” the agency wrote. “Checkpoint operations on the Northern Border serve an important function as part of that strategy to deter and prevent the unimpeded exploitation of U.S. roadways by those who take part in illicit cross-border activity.”

‘Nothing More than Marijuana’

The change comes too late for Dorren Rennis, a 48-year-old Massachusetts resident who faces criminal charges and a threat of deportation to his native Jamaica as a result of being stopped in Hartford six and a half years ago. Just a week before the Department of Homeland Security’s decision, the Vermont Supreme Court ruled on his long search-and-seizure saga.

In upholding Rennis’ conviction for transporting two pounds of marijuana in his car, the state’s highest court found that Vermont police officers acting alone may have lacked the authority to conduct the search — because they would not have had probable cause to stop him in the first place.

But because the search was initiated after federal agents stopped Rennis’ car — along with every other vehicle traveling south on Interstate 91 at the Hartford checkpoint that day — the justices affirmed a lower court ruling that the federal government’s need to secure American borders trumps Vermont privacy protections. Thus, the drugs confiscated from a backpack stashed in Rennis’ trunk could be used as evidence against him.

For civil libertarians, the January 17 ruling provided a fresh reminder of the threat they say is posed by internal checkpoints.

“That gives federal officers greater authority to operate in our state than others. It’s the genesis of this case. This could not have happened in Nebraska,” said Vermont ACLU executive director Allen Gilbert. “Many of these police activities done in the name of national security end up having nothing to do with national security and terrorism, and this is a good example of that. This is a case involving nothing more than marijuana.”

As he did with every vehicle, Overton asked the driver about his citizenship. Rennis told him he was a U.S. citizen, later clarifying that he was born in Jamaica but, as of seven months before, had permanent legal residence in the United States.

That would ordinarily be the end of the generally brief interaction between an agent and a motorist at the Hartford checkpoint. But Overton said later he smelled burnt marijuana in the car and asked Rennis if he had been smoking it. Rennis said, “No.”

Suspicious, Overton ordered Rennis to pull to the side, where an agent with a drug-sniffing dog awaited. The dog walked around the car but did not indicate any drugs were present. Rennis got out of the car — it is unclear if he was ordered, or did so voluntarily — and the dog still did not react.

Not that long after, Rennis conceded to the agent that he had indeed smoked marijuana in the car. Overton asked Rennis if he could search the car, and the driver agreed. Inside the trunk, Overton found a backpack. He asked Rennis to open it. Inside were two freezer bags filled with marijuana.

In the weeks that followed, defense lawyers for Rennis focused on the expanded search-and-seizure procedures officers employed in an effort to get the evidence — the bags of marijuana — thrown out. Their argument: The internal checkpoint, while “ostensibly” to protect the country from aliens, terrorists and weapons of mass destruction, was in reality built for “general crime deterrence,” which they claimed is illegal.

Their argument persuaded a Vermont judge — but only to a point.

“It is readily apparent that the agents could not have lawfully stopped defendant, and searched his car if they had been Vermont police officers performing a routine traffic patrol within Hartford, Vermont,” Windsor District Court Judge Kathleen Manley wrote in a 2008 opinion.

There were two reasons for her conclusion: State police can’t simply pull over passing cars unless they have “reasonable suspicion” of a crime. And permission to search a vehicle doesn’t extend to searching containers found within a car without a warrant — a normal police officer wouldn’t have been able to get Rennis to open the backpack, as the Border Patrol did.

Despite her reservations, Manley ruled that state law essentially deferred to federal law, which gives the Border Patrol a 100-mile berth in Vermont.

Between 2000 and 2005, DHS did not detain a single suspected terrorist in Vermont, but its marijuana seizures jumped from 419 pounds to 3,000 pounds, the Boston Globe reported, much of that coming from the interior checkpoint in Hartford.

After the judge rejected his challenge, Rennis pleaded guilty to marijuana possession in Windsor District Court in 2008 and was sentenced to one to three years of prison, all of which were suspended.

Eventually, a new attorney, Allison Fulcher, took his case and tried to get the conviction overturned by appealing Manley’s decision to the Vermont Supreme Court.

The appeal was rooted in a fairly simple question: Can the state use evidence that, while lawfully obtained by federal officers under federal law, would not comply with state law?

Fulcher cited a New Mexico Supreme Court case in which a state judge ruled that evidence seized by federal officers in a manner that would have violated state law was inadmissible in state court.

In an interview, she acknowledged that she had thrown a legal Hail Mary. “I had the sense that we were going to lose.” She was right. The justices unanimously upheld Manley’s decision, saying they were persuaded by a more local precedent — their own.

In 1996, Vermont justices ruled that a Vermont State Police drug arrest — the result of an investigation that began when federal agents at a New York City airport confiscated a bag of marijuana from a plane originating in Jamaica — was lawful.

“Where federal interests outweigh Vermont’s interests, we will neither attempt to deter federal officials from their duties nor reverse our determination that, where law-enforcement officers are cooperating in an investigation ... the knowledge of one is presumed to be shared by all,” Justice John Dooley wrote, stressing that justices were not tackling the question of whether the search would have been legal if it had been conducted by state police officers.

Based on Rennis’ Vermont conviction, federal agents filed paperwork in Massachusetts to initiate deportation hearings against him in 2010, but those efforts were abandoned while Rennis’ appeal was pending.

Rennis’ criminal attorney, Liz Kruska of White River Junction, and his immigration attorney, Kevin Murphy of Springfield, Mass., both declined to comment on his situation and declined to make Rennis available.

But Burlington immigration attorney Leslie Holman said that immigrants, once they are convicted of serious crimes, are almost always deported.

“They could decide to exercise prosecutorial discretion,” Holman said, “but in the case of a drug conviction, they’re not.”

The immigration reform bill currently languishing in the U.S. House of Representatives doesn’t change that. But it does include a provision, championed by Leahy, that would reduce the stop-and-search zone within international borders from 100 miles to 25.

“Senator Leahy continues to welcome the assurances that DHS has no current plans for a permanent checkpoint, but he wants assurances beyond that, and that’s why he introduced and passed legislation in the Senate on this,” his office said in a prepared statement. “He also will continue to press the case with the Homeland Security secretary about the general usefulness of such checkpoints in Vermont and the rest of the American interior, when weighed against the intrusion on the rights of the traveling public.”