At the Integrated Arts Academy, a Pilot Program Puts Violins in Students' Hands 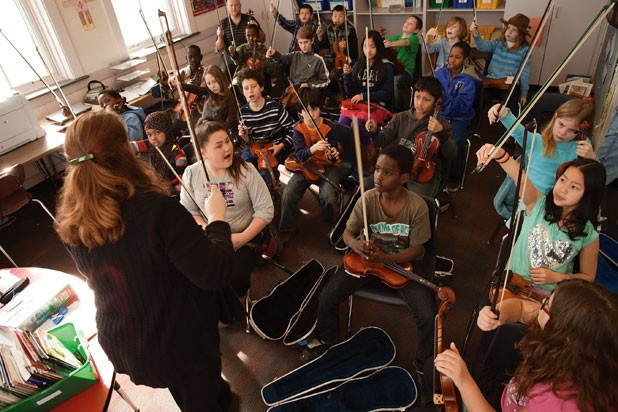 When Burlington violin maker Joe Cleary first toured the Integrated Arts Academy at H.O. Wheeler — the Old North End magnet school where his daughter is now in second grade — he wanted to know what kind of strings opportunities were available. At the time, there were none, but Cleary had read about a Venezuela-born program called El Sistema that has successfully brought orchestral access and instruction to underprivileged schoolchildren in several countries for more than 30 years. So he knew it was possible.

“I kept pestering them,” Cleary admits. Now, four years later, the school has embarked on an eight-week, El Sistema-inspired pilot program called ONE Strings (for Old North End). On Tuesday and Thursday mornings, all 46 fourth graders and their teachers and paraeducators pick up violins — regardless of whether they have any musical training — and bow their way through a group lesson under the instruction of Kathleen Kono. At IAA, violin playing is now as elemental to the school day as reading.

Cleary is just one of many advocates for musical access who have made that happen. Led by Victor Prussack, the Burlington School District’s coordinator of magnet schools, and at the urging of Fran Taylor, who directs the district’s after-school strings program for fourth and fifth graders, the IAA partnered with the Lake Champlain Chamber Music Festival, the Vermont Youth Orchestra Association and Burlington City Arts to develop the pilot program. A Vermont Community Foundation grant funded instruction, and the school’s PTO raised the money to rent 50 violins from the Burlington Violin Shop.

When Cleary first carried in the instruments, he says, “the excitement in the room was electric.” The students were given bows only last week, but fourth-grade teacher Autumn Bangoura told an invited group of stakeholders gathered for a school tour and program launch last Tuesday that her class took to it immediately. “One of my students even taught [visiting LCCMF founder-director and renowned violinist] Soovin Kim how to play ‘Hot Cross Buns,’” she says, smiling.

The launch included a performance in the gym for the whole elementary school by the Connecticut-based Jasper Quartet, arranged through the LCCMF. The quartet played cheerful selections from Beethoven and Haydn and then a few bars of a piece by contemporary composer Aaron Jay Kernis. When the first violinist asked the students how the somewhat atonal Kernis sounded compared with the earlier pieces, one child volunteered, “It’s like a horror story.”

Jasper’s visit allowed the children to witness a string group playing at its absolute apex. But ONE Strings is not meant to create professional musicians. “It’s not about training musicians or having an orchestra,” says Prussack. “It’s about having a lifelong impact on the children” — particularly those who would otherwise have no access to strings or lessons, whether through lack of funds or of cultural awareness. Principal Bobby Riley says 65 percent of IAA’s students qualify for free or reduced lunch, and 40 percent are English-language learners.

ONE Strings is also intended to develop a sense of community and collective achievement among the children, using principles borrowed from El Sistema such as letting the better players help coach their peers. On Thursday morning, Kono singled out two obviously experienced girls in fourth-grade teacher Aurie Thibault’s class to sit facing the group and play the tuning note. No one else had anything close to their level of ability, but in just 30 minutes Kono brought the class from readying their instruments — “On guard!” she announced as they raised their bows in unison — to executing the three-note song “Ho-Down.” As a final treat, she taught them to play the two-note theme from Jaws.

ONE Strings’ organizers have applied for a much larger VCF grant to make next year’s program available to all fourth and fifth graders year-round.They also hope to build up an “instrument library” of donated violins to avoid future rental costs. The district will likely give some support once the program’s value is demonstrated, but much will depend on tapping donors, winning more grants and involving parents, according to LCCMF executive director Martha Ming Whitfield.

Cleary says the effort is worthwhile. “Having a strings group in elementary school is ambitious only because it’s not typically done — not because the kids can’t or don’t want to do it. It doesn’t have to be a luxury.”

ONE Strings does not have its own website, but you can learn more about the Integrated Arts Academy at iaa.bsdvt.org, and about the El Sistema program at elsistemausa.org.