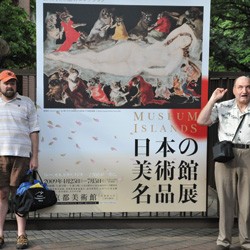 Back in the 1960s, when they were both students at Goddard College, David Mamet and Jonathan Katz used to travel from campus to campus earning extra cash as “ping-pong hustlers.” Katz remembers appearing in Mamet’s very first play, which “was very controversial, because he charged students 50 cents to see it.”

Mamet grew up and became, well, Mamet, while Katz embarked on a standup comedy career that led to the creation of his most famous role, as the tittle character on TV’s “Dr. Katz, Professional Therapist.” The animated series, where Katz offered weekly “analysis” to fellow comedians and celebrities, ran from 1995 to 2002 on Comedy Central and won Emmy and Peabody awards.

Now Katz, who lives in Massachusetts, is returning to Vermont for the Green Mountain Film Festival. Next Monday at Montpelier’s Pavilion Auditorium, he’ll show clips from his work, past and present, talk about his life with multiple sclerosis (he was diagnosed in 1997) and generally be a “show-off,” he says in a phone interview.

Katz talks with practiced standup rhythms. He’s always looking for an audience, he says, whether he’s talking to a Staples clerk or a restaurant waiter. “You know how Oprah tells the audience to look under their seats for a prize?” he says. “I’d like to look under my seat and find an audience.”

Katz says he spent 10 or 12 years in the Green Mountain state: “I have a really strong connection with Vermont.” This is a rare visit for him these days, though: With MS, he says, “traveling for me is complicated; traveling to a place that is snowy, that’s more complicated.”

At the GMFF, he’ll show a varied program, ranging from classic “Dr. Katz” clips to recent short films he’s made with young animators.

And he’ll talk, though he’s not sure how long he wants to keep that up: “I start to get nauseous at around 45 minutes, just gagging on my own self-love,” says Katz.

Ask him about his work with Mamet. “I got coffee for the screenwriter,” says Katz about House of Games, on which he has a story credit. “That was a very generous credit that David gave me.” In Chicago, he says, the two friends both worked in the realty office that inspired Glengarry Glen Ross: “I got 110 bucks a week, and he got a Pulitzer Prize.” Later, Mamet was a guest on “Dr. Katz” — where the therapist tried to hypnotize him.

“What I’m doing is a hybrid between standup comedy, PowerPoint presentation and a look at the body of my work,” says Katz of his GMFF program. “I kind of feel embarrassed, because I’m too young. I hope my best work is in front of me.” He pauses a beat. “But in case I’m wrong, it’s probably ‘Dr. Katz.’”

Some local filmmakers may need the soothing services of Dr. Katz after competing in the grueling Green Mountain 48-Hour Film Slam. Cinematic “slams” — in which teams must script, shoot and edit a complete short film in the time allotted — are cropping up everywhere, but this is the first one at GMFF. It’s too late to enter, but you can watch the exhausted teams show their work to the judges on Sunday, March 20, at 7 p.m. in the Pavilion Auditorium.

Plenty of less hastily created Vermont films feature in the festival. Look for a sneak preview of the collaborative documentary Freedom & Unity: The Vermont Movie and another of The Blood in This Town, a documentary about a record-breaking blood drive in Rutland. There’s also another chance to see Wretches & Jabberers, Gerardine Wurzburg’s doc starring two autistic Vermonters, Tracy Thresher and Larry Bissonnette (who’s locally known as an artist). The film has gotten national press and will be screened starting April 1 in AMC theaters.

Meanwhile, it seems Vermont’s documentarians have been hard at work chronicling ... everything. You can catch films about the state’s foster kids (Ask Us Who We Are, the latest from Bess O’Brien); Gov. Peter Shumlin’s former elementary school teacher (The World in Claire’s Classroom, from Marlboro filmmakers Lisa Merton and Alan Dater); late peace activist Sally Goodrich of Bennington (Axis of Good); our polluted lake (Bloom: The Plight of Lake Champlain); writer Grace Paley (Grace); local journalism (Headline Vermont); local music (James Harvey: A Master at Play); a renowned University of Vermont biologist (An Uncommon Curiosity: In Nature and at Home With Bernd Heinrich); Vermont kids getting in touch with nature (Mother Nature’s Child); and “Vermont Artists at Work.”

Want a more exotic time at the movies? The GMFF has Cell 211, a Spanish prison shocker; Mozart’s Sister, a French costume drama; a program called “Sci-Fi Silence”; and plenty more.