At the Flynn, Choir Practice Is a "Glee"-full Experience 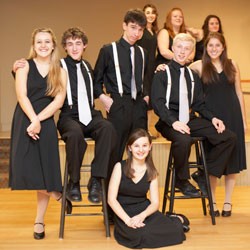 It used to be that show-tune choirs were for geeks. But ever since “Glee,” the wildly popular TV show that has turned a cast of hammy teens with big, belty voices into mainstream stars, singing show tunes has been socially acceptable again. Just consider Vermont’s “Gleeks.”

Andrea Bonamico and the 25 young performers she directs in the new Flynn Show Choir are proud to be Gleeks. They’ve unofficially dubbed themselves Triple Threat — for their simultaneous singing, dancing and acting — and are polishing up songs from Broadway shows Urinetown, Wicked, Hairspray and Footloose, plus a few nontraditional holiday songs, for their debut performance at the FlynnSpace next week.

The choir will hold auditions for kids in grades 7 through 12 on Saturday, January 8.

Flynn education director Christina Weakland acknowledges that the creation of the show choir was partially inspired by “Glee.” She was looking for a way to carry some of the energy generated by the summer’s youth-theater program into the rest of the year.

Auditions were held at the end of the summer, and, by the fall, Bonamico, the choral director at U-32 High School in East Montpelier, began directing the group with her husband, Piero. Danielle Sertz handles the choreography, and the group performs with a live band of professional musicians.

Bonamico aims to introduce the young performers to a wide variety of musical styles, including classic and contemporary Broadway music, jazz and even classical. “By the time these kids leave the program, a lot of them will be looking for or considering careers in musical theater,” Bonamico says. “The goal is to give them the tools to be educated in those styles.”

As a musical-theater educator, Bonamico says, “The whole ‘Glee’ thing has been really good for me. It’s ridiculous and outrageous and I love it anyway.” She hates that the TV show Auto-Tunes the kids’ voices, “because they’re extremely talented, and I want to hear their voices,” she grouses. But the quality of performance is so high, she adds, it gives her kids something to look up to.

“Kids who watch sports on TV are seeing professional-level sports all the time, so that’s what they model and that’s what they mimic,” Bonamico says. “But unless kids are going to New York or they’re traveling, they’re not necessarily seeing high-quality [musical theater] work.”

The TV show also gets kids to broaden their musical horizons, exposing them to some performers they might not otherwise hear. Bonamico was delighted when her students came to school one day and started searching YouTube for performances by that week’s guest star, comedienne Carol Burnett.

The Flynn Show Choir currently includes members from as far away as Stowe and Northfield. As is typical in high school performing arts, the girls outnumber the boys. But Bonamico says boys are warming to the idea. “Finally, they feel like they have permission to participate,” she says. “And a lot of them are realizing that Oh, girls like it when the boys sing.”

The group recently performed — a sort of dress rehearsal for its FlynnSpace debut — at Wake Robin in Shelburne. Bonamico says the concert really secured the ensemble’s dynamic. At one point, she asked the sizable audience of senior citizens how many of them had sung in a choir. Nearly every hand in the room shot up.

“It was really inspirational, actually,” Bonamico says. “It was huge for these kids to see that singing in a choir can be part of everyone’s life.”