At Shelburne Museum, the Art and Politics of Sugar

If not for sugar, there would be no Shelburne Museum. As museum director Tom Denenberg points out in the fall newsletter, "Museums don't grow on trees." Many, he notes, owe their existence to industry titans and their heirs seeking to make a mark on the American cultural landscape.

The Vermont landmark over which Denenberg presides is no exception. While the 60-year-old Shelburne Museum did not grow on a tree, he explains, it did grow indirectly from sugar cane. Founder Electra Havemeyer Webb's family fortune came from sugar. Her father, Henry Osborne Havemeyer, was such a dominating force in the U.S. sugar refining industry that he was crowned the "Sugar King" by the press in the late 19th century.

A hand-colored lithograph of a Havemeyer refinery hangs on the wall at the beginning of the new exhibition, "Sweet Tooth: The Art of Dessert," currently on view in the Pizzagalli Center for Art and Education.

The link to Shelburne Museum's inception was among the factors that led head curator Kory Rogers to the exhibit theme. "We always look for a connection to the museum," he says. 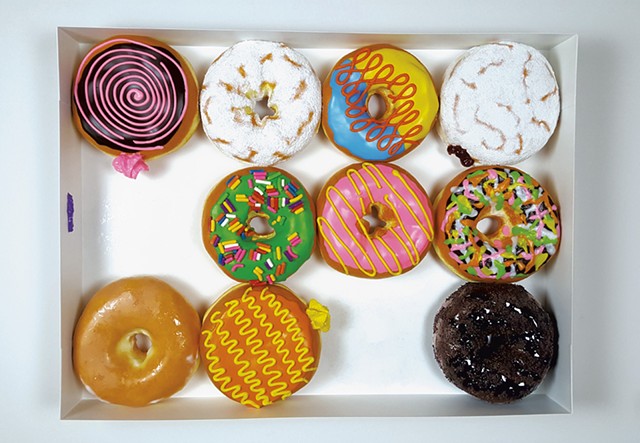 In addition, Rogers, who grew up in a restaurant family in Oklahoma and has worked at the museum for 14 years, says he's long been fascinated by the interplay between art and food. Lately, he observes, "It feels like food is in the news all the time: food waste, food politics, food and the environment. It's in the zeitgeist."

"Sugar is a complicated and loaded subject," Rogers acknowledges, from its historic coupling with the rise of slavery to its public health impact today. Despite these global realities and the personal battles many people fight against sugar's siren song, sweet treats can also evoke fun and whimsy.

"Candy and desserts have the power to take you back to your childhood," Rogers explains. "We didn't want to do a show that was just a bummer. You can walk in and just see poppy, fun art," he says, "but if you read the labels, you'll see that it's a bit more nuanced."

"Sweet Tooth" includes the work of 12 contemporary artists from across the country and Europe, as well as pieces commissioned from seven Vermont artists. There are also two intricate chocolate sculptures created by Emily McCracken of Lake Champlain Chocolates, one of the exhibit sponsors. "I'm pretty sure it's the first time we've ever had edible art on display," Rogers says.

The art is diverse in scale, style, media and meaning. Rogers worked with assistant curator Carolyn Bauer to develop the exhibit. "We cast a broad net. We wanted to represent art in all dimensions and materials — high art, low art and fashion," he says.

"It's like a walk into Willy Wonka's chocolate factory," Rogers says, gesturing around the gallery to real shoes with heels layered like lemon meringue pie and massive, three-dimensional lollipops. "Scale is a big part of this exhibit. When you magnify to a huge scale, something's off," the curator says. "It's a commentary on consumption."

Boffoli's photographed creations offer social commentary at multiple levels. In the exhibit, a shot of two figures carrying a body on a stretcher over a field of Twinkies is captioned: "Sometimes the shelf life of food exceeded that of the people eating it."

By phone from his studio in Seattle, Boffoli comments, "Food is an incredibly rich subject matter for art. It has color, texture, gorgeous geometry." His work features many types of food and drink, but candy and other sweets evoke especially strong responses, he notes.

"Sometimes a cucumber is just a cucumber, but a Twinkie is sugar, culture, fast food," Boffoli explains. "Sweets can have a dark undercurrent. I see the reactions when I put in a Twinkie or an Oreo. It works on a different level. It's really complicated and interesting." 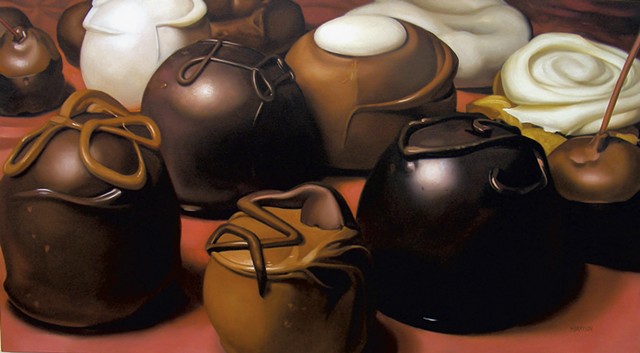 Many of the contributions by local artists are among the most overtly political in their messaging. Each was asked to create something representing America's insatiable appetite for sweets and to present it on a dessert plate.

Panton metal sculptor Eben Markowski created "$weet Tooth," a round steel cake with a wedge sliced out of it. The cake is "frosted" inside and out with color prints of medical slides of liver tissue destroyed by long-term, sugar-related disease. His artist statement details the impact and cost of this American health crisis.

"As an artist-activist," Markowski elaborates by phone, "I wanted to explore the social cost of human behavior and of the industrial activities around us." He was inspired, he says, by liver-tissue slides a physician friend had shared. "I like that a slice of cake is a cross-section itself, like the slides," Markowski says.

"Worker Bee Sugar Cubes" by Mary Zompetti of Grand Isle offers a decorative glass bowl filled with small resin cubes, each of which encases a dead honeybee. Zompetti explains via email that she works primarily in photography, new media and larger-scale installations. "Being asked to produce a small sculpture presented a new and exciting challenge," she writes, "both materially and conceptually."

In the context of the current political climate, Zompetti continues, she felt compelled to develop something that spoke to "the larger environmental and social impacts of the choices we make, both as individuals and as a society."

She had learned about the mysterious appearance of thousands of dead bees washed ashore in Florida and the speculation that its cause was excessive pesticide application.

"The sugar industry is notorious for its exploitation of the environment — and of its workers," details Zompetti in her artist statement. "This piece comments on what is often not discussed as we enjoy the seductive pleasures of refined sugar at our tables."

While "Sweet Tooth" offers plenty of easily appreciated eye candy, those willing to dig deeper will find the exhibit far more complex and interesting than a simple sugar rush.

"Sweet Tooth: The Art of Dessert" is on view through February 18 at the Shelburne Museum. "A Sweet Symposium" is Saturday, October 14, 10 a.m. to 4 p.m., including a guided tour, panel discussion and presentations by social and food history authorities, a chocolate sculpture demonstration, and lunch. $25-45. Learn more and preregister at shelburnemuseum.org.