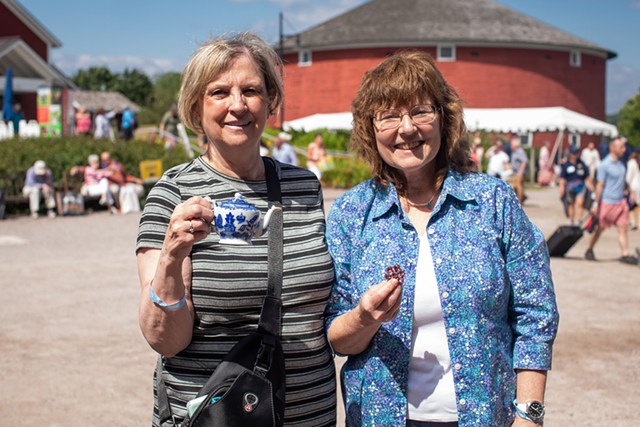 The brass-and-glass ornamental was valueless. The grin on its owner's face was priceless.

"It's an heirloom that's been handed down in our family for over 200 years," Martha from Colchester said, holding up a gaudy brooch, "and I learned that it's really worthless. But I don't care. I had a great time!"

She was talking about her appraisal by "Antiques Roadshow." On July 12, the tectonic plates seemed to shift under Shelburne Museum when public television's monster reality show arrived at its 47th shooting location, the last of its five shoots this year. Nearly 3,000 lucky lottery winners — having responded to the clarion call of "What's in your attic?" — swarmed the sprawling museum campus. They brought objects precious and puerile, family treasures and yard sale wonders, pocket- and U-Haul-size, all hoping to mine gold from dross. Or at least to experience the thrill of the chase.

A record 17,000 applicants vied for the free tickets, according to show staff, which beats the previous record held by California by about 1,000. In the run-up to the big day, tickets were offered for sale on Front Porch Forum. (Scalping free tickets? Must have been second-home owners.) By 8 a.m., the museum's parking lot was nearly full.

The draw is the traveling troupe of experts who are practiced in the art of detection. tweet this

Unless you are a regular viewer of "Antiques Roadshow," it may be hard to comprehend the fealty of its fans, who rival Deadheads in their devotion. But the legions know.

"It's the surprise, the history, the hidden excitement," Laurie from Milton said. (The show forbids the publication of participants' last names to avoid potential harassment.) Reggie, who traveled from North Westminster, explained, "You see unexpected items that have been passed from generation to generation and tell us a lot about our history."

The show's senior producer, Sam Farrell, is a 22-year veteran of the program. He has a two-word summation of its appeal: "American identity."

Farrell added, "These are things, but people relate to them, and they feel ... not just nostalgia but a connection with the objects." 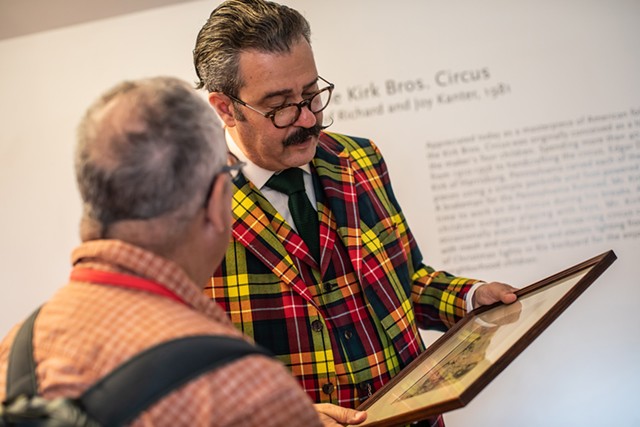 For many "Roadshow" devotees, the draw is the traveling troupe of experts who are practiced in the art of detection, skilled at discerning knockoffs from originals and gems from gewgaws. Some are flamboyant, such as prints and posters savant Nicholas Lowry, whose bespoke tartan suits could light a coal mine. Then there is pop culture and sports memorabilia specialist Leila Dunbar, a "Roadshow" lifer, whose superpower is hidden under unassuming street clothes. Asian art maven Lark Mason Jr., his trademark bow tie glittering in the sunshine, commands rock star-level groupies.

The objects are your ticket to ride, but if you want to get filmed for inclusion on the show, it's all about the story. As Farrell noted, you may have a thing that's worth $1 million, but a 10-cent story gets you nothing more than a pat on the back. Media types covering the event were permitted to bring items for appraisal; I decided to test the theory with an etching by the artist James McNeill Whistler and what I thought was a hell of an (almost-true) backstory.

Ticket holders were invited to bring up to two items for appraisal. Once inside, they were directed to one of the 15 gleaming white tents for categorization. The Whistler, for example, fell into "Prints and Posters." Once a treasure was labeled, the owner carried it to the appropriate appraising station. The appraiser examined the object, asked about its provenance and how it came into the owner's possession, and — ka-ching — pronounced its approximate resale value and auction potential.

When value and story meshed like fissile material, "Roadshow" staff went into their version of DEFCON 4. The object's owner was made a "guest" of the show and whisked to a holding room to await judgment under the klieg lights. The price of almost-fame: wait times of as long as two hours.

Some attendees benefited from so-called "snapshots," or impromptu film shoots by a roving crew with no stage set or lights, just camera and action. Nancy from Danby stole the sidewalk show with a baseball encased in Lucite. When her late brother had attended the 1995 U.S. Amateur golf championship in Newport, R.I., she explained, he got a young man named Eldrick "Tiger" Woods to sign a baseball that had cereal hero Tony the Tiger's name stamped on it. When her family held an auction to raise funds for an ill relative, Nancy bought the baseball for $450.

"The combination of Tony and Tiger is unique," Dunbar said, adding that the ball would probably fetch $2,500 to $3,000 at auction. Nancy was pleased. "I'm keeping it, no matter what," she said. "That's what my brother would have wanted."

Reggie from North Westminster offered a four-foot-long solid wood staff from Africa that turned out to be a type of cold grain masher without much street value. His wife, Crystal, brought family jewelry and modest expectations but got an appraisal of nearly five figures.

Nancy from Colchester, a descendant of author Pearl S. Buck, brought a pricey piece of 18th-century Chinese art and won cinematic treatment with the highly tailored Mason. But even an elaborate shoot of 45 minutes isn't guaranteed to make the cut for one of the three hourlong shows produced from Shelburne.

"Roadshow" senior staffers seemed delighted by the Shelburne Museum venue, itself a repository of antiquity. In an interview, museum director Tom Denenberg said discussions to host the show began several years ago.

"It just struck everyone ... if you're talking about antiques and Americana, to have [not] been to Vermont was something that they had to rectify. And so they did," he said.

The museum typically charges rental fees for special events, but the show's payment was "negligible," Denenberg noted. "There are times when we do things where we rent the museum, but in this case ... it's the most-watched television show on public broadcasting. You can't buy that level of exposure."

The Shelburne event will air when "Antiques Roadshow" begins its 27th season in January. Consider its longevity: The show debuted in the same year that a young fellow named Steve Jobs returned to take over Apple.

Back to personal history. After appraiser Robin Starr had turned her practiced eye on my Whistler etching, I turned on my practiced backstory. This much is true: The artwork came into my wife's family through her paternal grandfather's second wife, a woman often referred to as WOSM for Wicked Old Stepmother. Seems like a perfect match for a guy known for painting his mom.

Starr liked the tale, but she identified the work as "second state" — essentially a do-over by Whistler — but not as valuable as his first attempt because there are fewer copies of the original. Scarcity trumps quality. Go figure.

Was I disappointed? Nah, I had a great time!