At Pop-Up Market Caspian Oyster Depot, a Couple Comes Home to Bristol With Fish in Tow 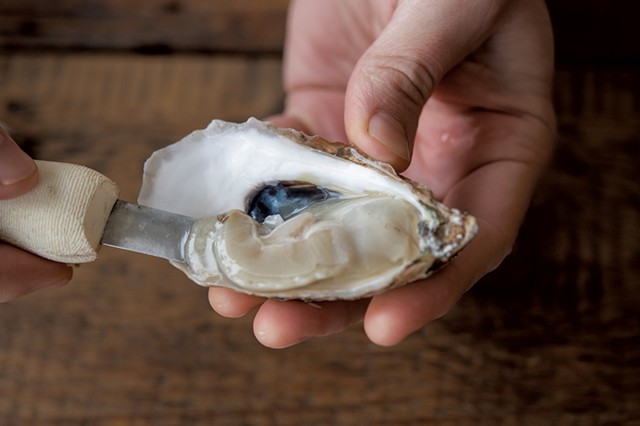 Years from now, as I scroll back through my pandemic-era food memories, one will stand out among the takeout boxes and the meals I'm already sick of cooking. On New Year's Eve, I stood out in the snow under the biggest, brightest full moon, trying desperately to wield an oyster knife without stabbing myself. It was a surprisingly celebratory way to end a terrible year, and the oysters — once I figured out the trick to opening their rough shells — were damn good.

I had Caspian Oyster Depot to thank for those fresh, briny bivalves and the fresh start they gave 2021. A few weeks later, when I called Sophie and Justin Wright, owners of the Bristol business, they said they'd also rung in the year by moon gazing and slurping back shellfish in the snow. So had many of their other customers. In a time when gathering is out, we'd managed to have a simultaneous experience, if not a collective one.

The Wrights launched their weekly fish-focused pop-up market on December 23 at Bristol's Tandem after owners Jess Messer and Lauren Gammon offered them the multiuse space on Main Street. After years of mulling over the idea for the business, the couple brought it to life in a couple of weeks, hoping to introduce themselves to the community and capture the holiday spirit at a time when people seek out seafood.

"I don't think it was something we were planning to launch anytime soon," Justin said. "We had the idea in the incubator, growing it, and then the opportunity just arose."

Working together is nothing new for Justin, 39, and Sophie, 30. The couple met on the opening team for Burlington's Hen of the Wood in the fall of 2013. Justin had cooked at Hen's Waterbury location for a couple of years; Sophie had just finished college and was working as a server in Burlington. "That's where we fell in love," Justin said.

They worked at Hen for a year, and then moved to Hawaii together to work on an organic farm. In 2015, they returned to Vermont to help start Doc Ponds in Stowe, where Justin was the opening chef and Sophie part of the management team; after a year, they were traveling again, this time to California.

Living in the Bay Area and voyaging to Europe regularly for work and pleasure, the couple took advantage of their access to fresh seafood.

"Having such good-quality fish be part of our daily meals was pretty new and special since living in Vermont," Sophie recalled. Seafood was a constant presence in their lives, whether they were hopping on bicycles to head to Monterey Fish Market; eating sardines seaside in Portugal, where they got engaged; or planning a feast of oysters, sea urchin and whole fish on the grill for their wedding on the California coast, which took place slightly more than a year ago.

"We didn't leave Vermont five years ago thinking, Oh, yeah, we'll come back and do a seafood place," Justin said with a laugh. "These experiences just kept forcing their way into our plan."

"We knew we were going to move back [to Vermont], and we both started thinking about things the community could use," Sophie said. "Fresh fish was on the top of our minds."

The timing of their move wasn't fixed until the pandemic hit. The Wrights returned in the summer of 2020 and stayed with Sophie's parents in Bristol, where she grew up, before settling in Lincoln. Taking the helm of Burlington's new takeout-only bistro, C'est Ça, Justin created a standout menu of casual French dishes with "some Eastern touches," he told Seven Days in October. On December 19, C'est Ça closed for the winter, and Justin turned his attention to the couple's new business.

Caspian Oyster Depot is essentially a fish market. There, you'll find oysters from Cape Cod, mussels from Maine, clams from Washington, line-caught halibut and yellowfin tuna from the Atlantic, and wild Icelandic cod and haddock brought in on day boats from Massachusetts. It's all sourced from Wood Mountain Fish, which is based in Boston but sells exclusively to Vermonters.

Customers place orders by Tuesday evening, and Ethan Wood delivers them on Thursday evening to the Wrights, who pack everything for Friday pickup at Tandem.

The pop-up market also has a walk-in component that fits the vibe of Bristol's Main Street perfectly, Sophie said. To complement their preorders and amp up their fish dishes, customers can purchase pantry items, such as preserved lemon, miso and salsa verde sauces. Justin whips up prepared items that help round out a home-cooked meal: bluefish rillettes, frutti di mare salad, homey chowders and simple bisques.

"It's designed to really open up a conversation about how to prepare the fish you're buying," Sophie said.

"We didn't want to have this menu of things that was too hip or hard to grasp," Justin added. "Preparing fish can be daunting, and I want to usher people toward the technique while giving them things to help make a special meal."

"It feels really sweet to dip our toes into that pool of community support." Sophie Wright tweet this

The market has been a great way to reconnect with friends in Vermont's food industry and establish new relationships, the couple said. They also sell butter from Ploughgate Creamery at Bragg Farm, coffee beans and espresso drinks from Vivid Coffee Roasters, pastries and bread from Slowfire Bakery, and mushrooms from Blue House Mushroom. All those items can be hard to find in Addison County, much like seafood.

The strong community is "something we've always known about Vermont," Sophie said. "But, coming back, it was a reintroduction to the idea that people really want to support one another here. We're seeing all these people who are excited to have us back, and it feels really sweet to dip our toes into that pool of community support."

Anyone who stops in on a pop-up day will see that the couple makes a good team. The market is an event, or the closest safe approximation of one. The Wrights take turns catching up with old friends over the music from a record player in the corner. Local business owners stop by for coffee and pastries, while new customers chat about recipes.

The Wrights are happy to work in tandem again, especially on something that's their own. "We had those experiences working together, and we really enjoyed them, and they were quite formative for our growing relationship," Justin said.

"We've grown and evolved in certain ways," Sophie said. "Our communication is stronger, and it feels really great to be working for ourselves and to have this awesome rhythm together."

The couple is expecting their first child. For now, they plan to stick to the once-a-week pop-up model, which ensures the freshness of their product, keeps their overhead low and seems to suit local demand. "It feels like a reasonable footprint, and it's something we really enjoy doing together," Justin said. "And Friday is such a classic fish day."

"And it gives us the ability to grow when it's the right time," Sophie added.

How that growth will look remains up in the air, like many things during the pandemic. But the Wrights envision a more established version of their market, one that incorporates live music and outdoor gatherings with rustic, shared meals — centered on seafood, of course.

In the meantime, we can all shuck oysters in the snow.

Preorder by Tuesday for Friday pickup, or stop in for prepared foods and coffee on Fridays, 9 a.m. to 3 p.m.

The original print version of this article was headlined "World Is Their Oyster | With their pop-up market, a couple brings seafood, fish talk and community to Bristol"