At Off Center, Jordan Gullikson's New Play and Theater 'Lab' 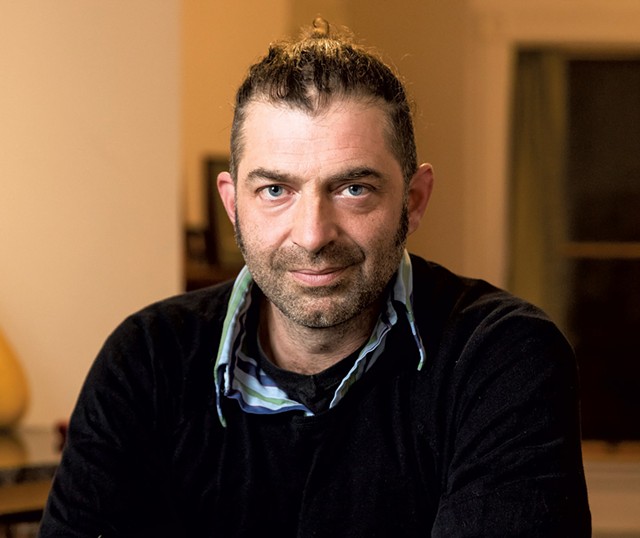 As the days grow shorter and our artificially illuminated nights grow longer, Burlington actor and playwright Jordan Gullikson's newest work provides a timely commentary. A staged reading of his Blood Maze (Thieves of Darkness) on Saturday, December 19, will close out the Off Center for the Dramatic Arts' inaugural season of a yearlong series of works by local playwrights called Original Content at Off Center (OC@OC). This last hurrah salutes a new beginning, too: The reading is a trial run for Gullikson's newest dramatic venture, the New England Theatre Lab.

"I'm interested in the process of creating new work," says Gullikson, who is also a teaching actor for Vermont Young Playwrights Project. "Many plays that local writers produce have a short time in the sun, and they don't get a lot of development time." Through NETL, he aims to provide playwrights with workshop environments, including "cold readings, staged readings and even workshopped productions," essentially offering the human resources they need to develop a script fully.

In Gullikson's case, the staged reading will allow him to test one of three potential endings for Blood Maze. The playwright wavered when attempting to pin down the piece to a particular genre, finally settling on "dramatic movement theater." (Despite the grim title, he says the work has elements of comedy.)

In its raw state, the script is fantastical: a tale of angels, deities and humans spread across two universes, the latter facing trial for crimes against nature such as "the theft of natural darkness through the introduction of artificial light," Gullikson explains. A remarkably expensive light switch serves as a metaphor for the concept of how "we are becoming more and more separated from the world, and each other, through artifice," Gullikson says.

It's a pointed reversal of the traditional Prometheus tale — a god brings fire to Earth to save humanity — that paints technological advances as detrimental to human psychic and moral health. At the same time, Gullikson explores the concept of humanity's interconnectedness with the environment. "I'm in love with the idea of connection between people and people, people and places," he says.

Gullikson drew inspiration from the work of scientist Rupert Sheldrake. "He believes that we're all actually connected in some invisible way," he says. The concept, which skeptics consider pseudoscience, is illustrated literally in the script: It calls for a long piece of fabric to be woven through the theater "so that each audience member has contact with it," Gullikson explains.

Postshow, Gullikson says, he will either hold a Q&A session to solicit feedback from the audience or ask for input via email. In the spring, he hopes to issue a call for submissions and select a script to workshop next fall. "It wouldn't matter if it was a new playwright who's never had their work produced," Gullikson says. "The selection will be based on the merits of a particular script."

Off Center cofounder and president Paul Schnabel says the organization "totally supports and will facilitate [Gullikson's endeavor] in any way it can." Though the nonprofit mainly serves playwrights in the Burlington area, Schnabel notes that he'd like the black-box venue to be "the home for original theater in the state."

Gullikson takes it a step further. "This is my vision: Off Center will become the center for new-work development in the region. Which is a pretty dramatic thing to say, but I think there's a lot of talent [beyond Vermont] in playwriting that doesn't have a venue."

Fellow actor and playwright and Green Candle president Aaron Masi sees the need, as well. "There are so many people in this community that need that support," he says. "As playwrights, we need the support of other artists to help us bring our work beyond the page. Jordan's idea is just another way of bringing the theater community together."

It's not a new concept. NETL is in line with efforts already under way at Off Center. Playmakers, a monthly series initiated by Seth Jarvis, offers local playwrights the opportunity to share their new work through staged and cold readings. Thespians such as Masi see NETL as an exciting expansion of the resources. "Everyone's doing original work, so why not come together to support each other? We can't do it alone," he says. "Jordan has always been a leader in that conversation."

The original print version of this article was headlined "Staging Ground: With a New Work, Burlington Theater 'Lab' Begins"