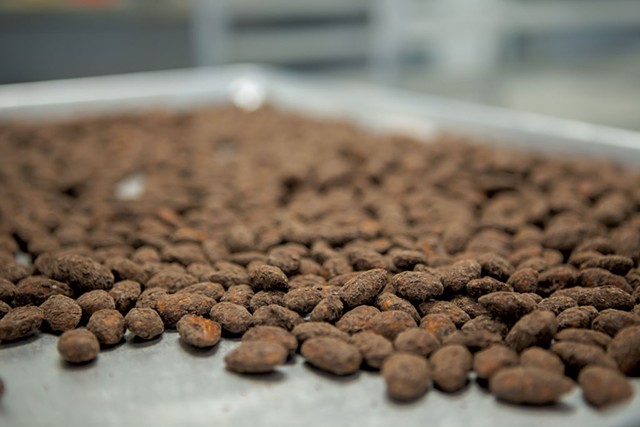 The Toohey family takes chocolate very seriously. They see every interaction at their Burlington shop, NU Chocolat, as an opportunity for education, whether it's about their sourcing practices, the delights of a well-made milk chocolate, how truffles are the perfect chocolate-delivery system or the logistics of working as a family.

Kevin, Laura, Rowan and Virginia Toohey opened NU Chocolat on Battery Street this past winter, just in time for Valentine's Day. While the family has operated several chocolate and confection businesses over the years — including Bijou Fine Chocolate in Shelburne, which closed unexpectedly in October 2017 — this is the first shop they have owned.

"When we came to Vermont, we weren't sure how we were going to make a living," Laura said of the family's move to Hardwick in 1993. Both Laura and Kevin are Swiss-trained chocolatiers, though, so they "were able to pull the wild card out of our pocket of chocolate, having little businesses out of our home," as Laura put it. One of those businesses was Luna Chocolate, a wholesale truffle operation that the Tooheys owned from 1995 to 1999 — "back before the internet," Laura said.

"It's magic that we can eat chocolate." Kevin Toohey tweet this

Besides all the traditional recipes and techniques, Laura and Kevin's European training included an emphasis on teaching the next generation of chocolatiers. As a result, "Our five children grew up immersed in these chocolate businesses," Laura said. Two of those children — Virginia and Rowan — are now adult business partners.

"The tradition has no value if there are no young people that come along," Kevin said. "They take the tradition and move it along and innovate."

The opening of NU Chocolat is the realization of an enduring dream for the close family and a comeback from the disappointment they faced at the shuttering of Bijou (which resulted from a dispute between the business' owners and its landlord). "It was always the ultimate dream, to have our own shop, when we were growing up and doing it out of our house. At the time, we imagined it would be in Montpelier," Virginia said.

"That was the big city for us back then," Kevin added.

Now working out of a bright, sleek space in Vermont's biggest city, the family shares their dream with their customers through their silky truffles and dangerously snackable cocoa almonds. The storefront also houses their production facility, which, much like NU Chocolat's sourcing and philosophy, is transparent. Through a large window facing the street, customers can watch the team hand-gild truffles after they've traveled through the enrobing machine and carefully half-dip the stained glass-like candied Italian orange slices in dark chocolate.

The shop is also a café, offering coffee, tea and decadent chocolate-based beverages. Shelves line the walls with a library of bars, neatly stacked in clear packaging so that customers can see the chocolate inside; like a library of books, the contents are transportive, offering glimpses of far-off origins through their flavors.

Becoming part of other families' traditions is one aspect of the business that the Tooheys are passionate about. "There's this intimacy with customers, because people are coming to buy all their sweets for Christmas or birthdays or Valentine's Day," Virginia said.

"We're somewhere between a telephone repair man and a medical doctor," Kevin joked.

Beyond building those customer relationships, the Tooheys consider themselves social ambassadors for the chocolate industry, sharing information about sourcing and the supply chain. "Most Americans have no clue what happens on our side of the veil," Kevin said.

The mass-market chocolate industry dominates in the United States, providing the cheap candy that lines grocery-store shelves. That chocolate is produced on an enormous scale from low-quality cacao plants selected for their productivity rather than for the flavor of their beans.

"What most people call 'chocolate' is any kind of candy bar. When people come in and we talk to them, they're often surprised by the information we share," Laura said. "It takes an interrupter, in a way, in order for customers to start questioning what they know about chocolate."

NU Chocolat is unusual in that it uses three suppliers. "The chocolate becomes like a palette a painter would use, and even though it's all chocolate, we can choose each one for its tones and depth and brightness," Laura said.

All three suppliers, Luker Chocolate, Felchlin and Valrhona, make their chocolate from the expressive fino de aroma cacao, which constitutes only about 8 percent of the cocoa produced in the world. While they may source from the same regions, each company has a distinct formulation and roast profile that makes its product a complementary part of NU's artistry, accentuating or subduing specific flavors and characteristics.

Kevin recently spent time at Felchlin's American headquarters in Washington, D.C. He described the Swiss company, a fairly new supplier for the Tooheys, as "the masters of milk chocolate."

If it weren't for its richness, NU's milk chocolate could masquerade as something darker. It's less sweet than expected but has notes of caramel and the smooth, almost mouth-coating sensation characteristic of milk chocolate.

French company Valrhona, with which the Tooheys have been working the longest, is popular with chefs and formulated for a global palate. Laura called it "distinctly French in the way we think of French roast coffees or French cigarettes. It's that very dark, intense flavor."

The powerful notes of Valrhona are useful in certain applications, but for subtler flavors, the Tooheys turn to their main supplier, Luker Chocolate, a family-owned company that arose from Colombia's indigenous chocolate culture.

"In a lot of places where chocolate's grown, it's not actually part of the day-to-day experience. It's grown and then exported somewhere else," Kevin said. That's not the case at Luker, which Kevin and Laura recently visited in Colombia. "To be there on the ground and experience that heartfelt connection with the Colombian people and their indigenous culture was life-changing," Kevin said.

Besides the quality of the chocolate, the Tooheys are drawn to the work that Luker has done to revitalize and support local farming communities, many of which had previously grown coca for the cocaine industry. "They were getting a lot of money to grow coca, but their communities were devastated with violence and fear," Laura said.

Luker Chocolate has been working with farmers to provide a guaranteed market for cacao since the company established a research center in the mountains of Colombia in the 1960s. The direct-trade model reduces risk for the farmers while encouraging them to grow a high-quality product. "They're building long-standing, mutually beneficial relationships," Kevin said.

Sharing information about Luker's work with their customers is a huge part of what the Tooheys hope to accomplish with NU Chocolat. "We all care about this stuff," Laura said. "It matters to us, and it matters to the planet."

"Here's something that's real, that tastes good and is actually having an impact," Kevin said. "That's a wonderful thing to bring back to Burlington and share with people — that sense of hope."

NU's lavender truffle, crafted from Luker's single-origin dark chocolate from the Tumaco region of Colombia, is a perfect bite to have while digesting the information the Tooheys share. The delicate squares of dark chocolate are decorated with a white interlocking geometric pattern, reminiscent of chocolate's crystalline structure. Fresh lavender infused into the ganache brings out the chocolate's floral, herbal notes, while the Monument Farms Dairy butter and cream yield the rich, smooth mouthfeel one would expect from a well-made truffle.

It's a celebration of the chocolate that's traveled so far (both geographically and in the process from bean to truffle), of the local ingredients that Vermont brings to the table, and of the Tooheys' training and precision in chocolate making.

"This whole world of chocolate is freakin' complex, and it's fascinating — everything from the germination of the flower [to] the way it grows on the tree, how it gets harvested, everything. It's the wildest thing," Laura said.

"It's magic that we can eat chocolate," Kevin added.

The original print version of this article was headlined "NU Approach | In a new Burlington shop, a family business shares passion and information through chocolate"