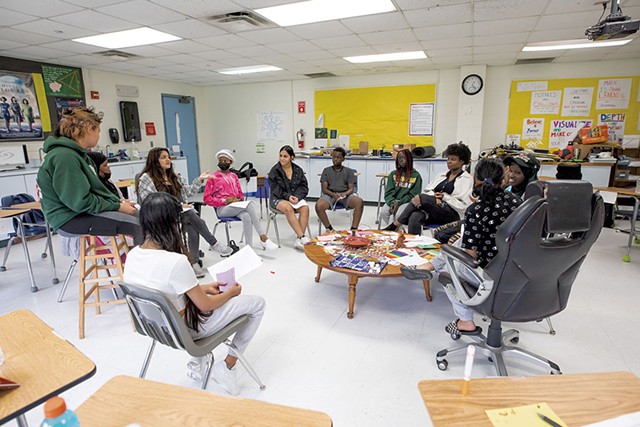 "I was like, Oh, my God, this sounds so fun," Najd, who came to the United States from the Middle East when she was in elementary school, remembered thinking. The rising senior signed up for the five-week program.

Now, two weeks in, Najd is having fun, but she's also experiencing something more profound. The academy has given her the chance to reflect on her experience as a student of color in the Burlington School District and to help improve that experience for others.

In school, Nadj said she's been judged because of her ethnicity. She was initially put in a low-level math class because she came from a different country, she said. When she told another student that she was Arab, he responded: "Oh, so you're a terrorist."

"What I like about this program is, I feel like I am welcomed," Nadj said. "I see people going through the same things as I am, and I think it's such a great opportunity for us to actually make a change ... I really don't want kids to go through what I went through as a person of color."

Nadj is one of 51 Burlington middle and high school students participating in the inaugural Racial Justice Academy, which meets four afternoons a week through the end of July. The program is the brainchild of the district's director of equity and safe/inclusive schools, who goes solely by his last name, Sparks, and equity instructional leader Autumn Bangoura.

Sparks said the program is one he's wanted to start for years, but funding was always a barrier. With an influx of federal COVID-19 relief funds, he and Bangoura seized the opportunity and quickly designed the academy.

The program is organized by weekly themes: identity and community, rage and oppression, joy and love, and change and activism. Students participate in a range of activities, including restorative-practice circles, where small groups have open-ended conversations, do journaling, and attend field trips to the Rokeby Museum and Clemmons Family Farm, a Charlotte property owned by a Black family since the 1960s. In the final week, students will present personalized projects on racial justice to a roundtable of people in the community, including Superintendent Tom Flanagan and school board members.

The academy's goals are wide-ranging: to reengage students who struggled with absenteeism during the mostly virtual pandemic school year; to teach about social and racial justice; to support students' social and emotional learning; and to train students in leadership skills that they can put into practice during the upcoming school year.

Participating students, who are predominately nonwhite, are paid $15 per hour, for three and a half hours per day, to attend.

The academy is training students of color to act as "consultants" so that they can educate adults about the experiences they've gone through and help improve the system, Bangoura added: "We have to compensate them for the labor they're doing, the stories they're telling. It's healing for them, but it's also educational for us."

Last Thursday afternoon, students in hijabs and hoodies, T-shirts and sneakers gathered in classrooms at Lyman C. Hunt Middle School to share some of those stories. Student facilitators trained in leading restorative-practice circles by UP for Learning, a Montpelier-based nonprofit that specializes in youth-adult partnerships, guided the conversation.

In one group of around 10, Grace Brown, a rising senior who was born in a refugee camp in Ghana after her family left Liberia, asked students to take a piece of construction paper from the center of the circle and write a word or two about what they need to speak their minds freely.

Brown wrote "active listening" on her paper. "It means you're listening just to listen," she explained. "It's OK if we have awkward silence."

Other students shared words such as "respect" and "openness."

The conversation was centered on anger. Students spoke about times when they felt upset at school and how they dealt with those emotions.

One student said she's noticed that when white students are mad, teachers will often listen and help them work through their problems. Black students, meanwhile, are sometimes viewed as "overly dramatic" and sent to the office.

Another student talked about feeling angry when, during a period of silence in honor of George Floyd this spring, one teacher whistled Christmas carols the whole time.

Another said that a gym teacher told her she couldn't wear her skirt, part of her cultural dress, because it was too tight. Some girls don't feel comfortable changing into sweatpants because they've never worn pants before, she explained.

We are really hurting kids, and that's got to stop. Sparks tweet this

Rising junior Sahra Hassan said "a traumatizing experience" prompted her to sign up for the academy. In an assignment this spring related to learning about abolitionist Frederick Douglass, students were tasked with imagining how they would escape to freedom if they were a slave. Hassan, who was the only Black student in the class, said it felt as if slavery were being likened to a game. She refused to do the assignment and stopped going to class. A meeting with the teacher only made things worse, she said. The high school's student achievement adviser, LeVar Barrino, suggested Hassan come to the academy and try to work toward changing things.

In an interview, Sparks said that hearing students tell such stories has saddened him. He said it is critical to improve the educational experience for students of color in Burlington, who comprise 40 percent of the student body.

"If students are bringing in all the issues that they're facing at home, and then they come into our schools and they're experiencing racism and a sense of not belonging, it does not lend itself to a healthy student being ready, willing and able to learn and engage in education," he said. "So, we have to really start to think about those roadblocks and the barriers we put in front of students, and remove them ... Because what I keep hearing and going back to is, we are really hurting kids, and that's got to stop."

Sparks said that Flanagan, who's served as superintendent for a year, is committed to addressing white-supremacy culture and furthering anti-racism work. This year, Flanagan established a centralized Office of Equity and equipped it with the necessary staff and funding.

"I think that the Racial Justice Academy is hugely important to making that work happen and ensuring that it plays out in schools," Flanagan said in an interview. "Without ... hearing the direct feedback and experiences from our students, we're going to change a lot more slowly or not change at all."

Though it's difficult to hear students and families speak about negative experiences in the school district, Flanagan said, "it gives me a sense of purpose that there's real work to be done."

Bangoura said that part of the solution is training teachers in the district, 94 percent of whom are white, "to be able to talk about race and racism in ways that don't harm students further, and educate and hold white students accountable, too."

Hiring a more diverse teaching staff is also a district priority, Sparks said, but there are systemic barriers that have made that historically difficult. For example, he said, some New Americans have teaching experience in their home country, but there is not a straightforward pathway for them to get the credentials to teach in Vermont.

Sparks said the work that started at the Racial Justice Academy will extend into the coming school year. Students will learn how to participate in conversations at board meetings and with district leadership and will be given more opportunities to be involved in decision-making processes. One example that's already happened: When the district recently hired a new restorative practices coordinator, students were included on the interview committee.

"We really anticipate using students to hold us responsible and accountable for change," Sparks said.

Students seem up to that challenge. In another small-group activity at the academy, teens worked together to write "Dear teachers" letters on chart paper — bulleted lists of what they think is important for their teachers to know. Afterward, they shared their lists. Bangoura filmed each student reading the statement that resonated most with them, and she explained that the final video would be shown to teachers as part of their professional development.

"The color of my skin doesn't define my personality," one student read.

"Respect our beliefs and culture," said another.

"Stop dismissing us every time we try to express our feelings," a third student shared.

Brown, the student facilitator, said that it's "heartbreaking" to hear fellow students say they don't have anyone to go to at school when they feel enraged or oppressed. That's why it's important that there are places where students can speak freely about their experiences, she said. Being part of the summer academy has made her feel like change is possible.

"I hope this isn't one of those things where we have the program, everyone goes home, and the same problems are still occurring with no resolution," Brown said. "I hope that we can actually bring change to the community. I'd love to leave something with my school before I graduate."

"I really feel like people our age have so many powerful things to say, and we really need to be heard," she said.

When she was younger, she used to yell and leave the classroom when students or teachers said things that hurt her. But now that she's "a mature version of herself," she's learning to think differently.

"You guys might be ignorant, [but] we're going to educate you all," she said of her new approach. "I don't want my emotions to take over me and just be mad. I want to be like, 'No, it's OK. We can talk this out and change.'"

Correction, July 14, 2021: A previous version of this story misspelled the name of Sahra Hassan.

Editor's note, July 26, 2021: After this story was published, Nadj requested that the paper remove her surname from the online version. Among her reasons: She said that when a school district official asked her to talk to a reporter, she did not understand her rights. Owing to that, and her age — 17 — the paper has granted the request.

The original print version of this article was headlined "Justice for All | At a new summer academy, Burlington students of color share stories, learn leadership skills and get paid"