At Middlebury College, Students Practice Minimalism With an Artwork by Sol LeWitt 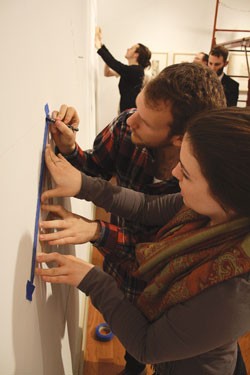 The First Commandment for museumgoers — thou shalt not touch — has been suspended this week for 13 Middlebury College art-history students. They’re drawing with crayons on a wall of the college’s Museum of Art.

What would usually be considered totally transgressive behavior is actually an essential act in regard to the centerpiece of a show titled “Linear Thinking: Sol LeWitt, Modern, Postmodern and Contemporary Art from the Collection.” The students in Middlebury professor Edward Vazquez’s course on minimalism are completing a LeWitt wall drawing in accordance with instructions from the artist’s estate.

This major American minimalist, who died in 2007 at the age of 78, had a practice of allowing people other than himself to fill in grids that he or assistants had thinly sketched in pencil on a wall. Such exercises in participatory creativity were carried out within strict limits, however. LeWitt specified the types of materials and colors to be used while also laying down precise rules for how his prescribed diagrams were to be executed.

In the case of his “Wall Drawing #394,” which is on loan from the artist’s estate, the students have also been told there are three possible ways — horizontal, vertical and diagonal — to draw lines in modules of the grid, explains show curator Emmie Donadio.

Vazquez further elucidates the interplay between the master’s template and his acolytes’ autonomy: “If this piece were installed 10 times, it would always be recognizable as the same piece, but there would be some idiosyncracies.”

Middlebury’s version of the work will be completed by March 4 and remain on view until April 21. Then it will be erased.

LeWitt liked to emphasize the “essential impermanence” of works of art, Vazquez notes. Not all the artist’s wall drawings have expiration dates — several are in permanent collections, including that of the Hood Museum of Art at Dartmouth College. Even so, ephemerality is a recurrent aspect of LeWitt’s aesthetic.

Students’ hands-on role in installing this piece provides them “with a much more embedded way to discuss LeWitt’s work,” Vazquez suggests. In addition to the excitement of cocreating a work by a famed American artist, the students get to experience “the monotony of the process,” their teacher points out. “There’s no shortcut to drawing these lines on the wall,” Vazquez says, estimating that the process will require about 50 combined hours of labor. “It’s important that they get the repetitive nature of producing the piece.”

Donadio and a couple of other Middlebury art profs have selected a dozen pieces from the museum’s collection to complement the LeWitt wall drawing. Picasso and Matisse are represented by wavy figure sketches. Also included is a painstakingly composed op-art piece in black and white by Vermont’s own Frank Hewitt, who died in 1992.

All the pieces are “characterized by reliance on line, whether hard edged or organic,” Donadio notes. The earlier works exhibit the distinctive touch of their creators, while in those made closer to our own time, “the lines are anonymous,” Donadio says. “They don’t show characteristics of the artist’s personality.”

Some of the pioneering minimalists in the 1960s sought to expunge traces of the artist’s hand from their works — in sharp contrast to the emotive outpourings of the abstract expressionists who preceded them.

The students completing the LeWitt piece, first crafted in 1983, can thus be seen as technicians. But they’ll be leaving their own distinctive marks, as well.