It’s a little early in the season for crickets — unless you’re a Middlebury college student raising them for food.

Senior Alex Bea and his cohorts have hatched a fledgling start-up based on a premise that might challenge even the most hardcore foodies: bug bars. All over the world, for thousands of years, people have looked to insects as a source of nutrition.

The business, titled Bumu, is raising, processing and baking crickets in an effort to devise an energy bar or food supplement to feed some of the world’s hungriest people. Inside a closet in the college’s Old Stone Mill, roughly 2000 adult crickets chirp softly, oblivious that their snug little home is, in fact, a cricket farm — and, like it or not, they’re dead meat.

Bumu stands for Bug Munch; the group abbreviated the full name after realizing that the ick factor might be a liability. But they’re sticking to their pitch that insects make sense both economically and environmentally as a cheap, eco-friendly source of protein, iron and other nutrients. Just three crickets a day are enough to satisfy the daily iron requirements of a human being, Bea says. According to the World Health Organization, iron deficiency is the most common nutritional disorder in the world.

With that in mind, the Bumu team got to work in February. Bea, who has a knack for finance, reached out to friend Chester Curme, a recent graduate, who heads up Bumu’s PR effort when he’s not working as a teaching assistant in the Middlebury College physics department. Bea also roped in Jonathan Schell, because he knew the sophomore had a flair for cooking; now Schell heads up food science and recipe development. Junior Max Bacharach is the farming guru: This spring he traveled to Thailand — a “hot spot for bug eating,” Bacharach says — to see how Thai families raise insects for extra income.

Back in Middlebury, in a downtown space the college makes available to budding student entrepreneurs, the Bumu team raises its crickets in 31-gallon Rubbermaid containers. Soon they’ll expand to 55-gallon drums. Bacharach says his Thailand experience convinced him that almost any material can be used for insect farming.

He hopes that in addition to manufacturing a cheap, exportable protein bar, Bumu can export lessons in cricket farming to developing countries. “If people aren’t doing it in tropical, warm climates, they should be,” Bacharach says. “There’s no reason not to.”

The Bumu bins are outfitted with carbon filters and small fans that cut down on the odor — reminiscent of a pet shop — produced by the insects. Bea uncaps one of the containers housing the mature crickets, which are now six weeks old. The container is filled with empty cardboard egg cartons to provide extra surface area on which the crickets can rest. The younger crickets are housed in a hatchery; if they weren’t, the older insects would eat the smaller ones.

Crickets are efficient when it comes to breeding; a female lays between 50 and 100 eggs every two to three days. And the logistics of raising the resulting insects aren’t terribly complicated, Bea and Curme say. Crickets are already raised commercially to satiate pet reptiles. But they’re expensive to buy in large quantities, which is why the students are making their own.

Once fully grown, the crickets are popped into a freezer to slow their metabolism until they die. Later they’re baked and broiled on cookie sheets. Some of this makeshift cricket harvesting has taken place in Middlebury College dormitories, where Bea invites passersby to guess what might be roasting. The answers include London broil, roasted mushrooms, lentils and, enticingly, bacon.

Bumu uses coffee grinders or food processors to grind the roasted crickets into a fine powder. From there, they are incorporated into recipes — though Bea says he has popped the occasional live cricket into his mouth, just to prove that the insects are, indeed, edible.

Earlier this month, the Bumu team harvested roughly 2500 crickets into three product options: an energy bar, something that looks like a granola cookie, and a “no-bake” concoction dusted in powdered sugar and loaded with chocolate. Bea is betting on the bar, which has a granular texture and a slightly unusual taste: It looks like a brownie but tastes a bit meaty. Bea describes it as “interesting,” rather than weird, then asks, “If it came in a CLIF bar wrapper, what would you think?”

It’s a fair question. Though the cricket flavor is a distinctive one, the finished product isn’t very different from any other boring-yet-palatable energy bar.

Bumu’s innovative idea has earned the team a semifinalist spot in the running for the Dell Social Innovation Challenge. The competition’s winner, which gets $50,000 in start-up cash, will be announced in May. Bea isn’t looking for any other kind of investment yet, though the company is hunting for space — preferably in Vermont — to continue experimenting, growing crickets and testing recipes throughout the summer.

If a Bumu protein bar went to market, Bea and his fellow cricket farmers hope it would be in partnership with an organization such as USAID or UNICEF that steps in during times of famine or food shortage. Bumu has the perfect connection: Middlebury College alum Charlie MacCormack, who heads Save the Children, sits on the group’s board of advisers.

Countering concerns that Bumu would be pushing crickets on some of the world’s most disadvantaged people, Bea points out that a stigma attached to bugs-as-food simply doesn’t exist in much of the world: An estimated 80 percent of the planet’s population already eats insects.

That doesn’t include a skeptical, largely squeamish American audience. “We don’t have the time or the resources to fight the stigma here,” Bea says.

But the stigma may need challenging — and soon. In places such as China and India, middle-class appetites are demanding more beef, pork and other protein from “macro” livestock. Global demand for meat has multiplied in recent years, and now many scientists argue that raising meat to meet this demand is inefficient and unsustainable.

Not so with insects. One hundred pounds of grain yields five pounds of beef. Feed crickets the same amount, and they’ll churn out twice as much protein. (Bumu’s crickets are currently eating steel-cut oats, says Bea, but he adds that they’ll eat just about anything.) Pound for pound, the production of insects requires far less land and energy than that of macro livestock. Plus, crickets are easy to grow, don’t mind the dark and “they use so much less water it’s ridiculous,” says Bea. “It’s shocking how little they consume.”

Could insects land on more plates in the U.S. someday? Maybe, though Western foodies have made the pitch before — unsuccessfully. In his 1885 pamphlet “Why Not Eat Insects?”, Vincent Holt beseeched, “I only ask of my readers a fair hearing, an impartial consideration of my arguments and an unbiased judgment. If these be granted, I feel sure that many will be persuaded to make practical proof of the expediency of using insects as food.”

Holt’s time may have finally come. A few innovative Western chefs are just beginning to incorporate insects into their cuisine; bugs have gone from being the cuisine of gross-out shows such as “Fear Factor” and “Survivor” to being a featured ingredient on “Top Chef Masters.” Bea and Curme wonder if insects could follow the path of sushi in the United States, from unpalatably strange to trendy to the shelves of your local grocery store.

A sign of hope? Curme says Western eaters are accustomed to viewing live and processed protein through different lenses.

“There’s cattle, and then there’s beef,” Curme says, suggesting most people prefer to think of the two as unrelated. “It’s rebranding.”

Against an audio backdrop that sounds like a summer night, Bea adds, “And our slaughterhouses are so much more pleasant.” 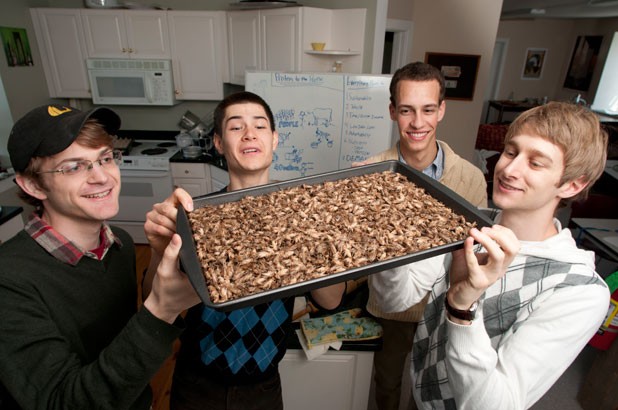