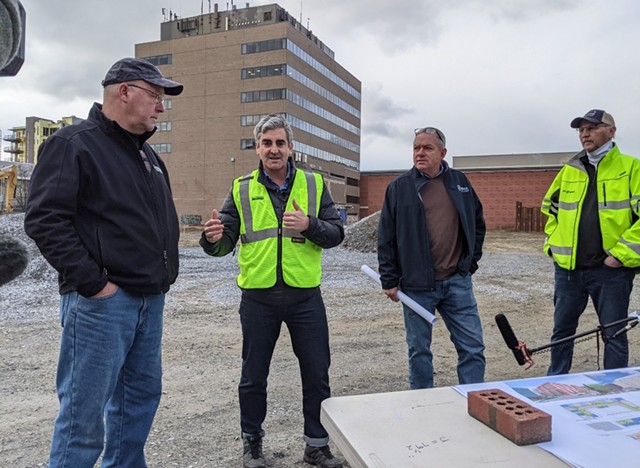 For the first time in four years, there's movement at the Pit.

CityPlace Burlington, the long-stalled project in the center of Burlington’s downtown, was an active construction site on Tuesday morning. A crew of hard-hatted workers busied themselves at the site's entrance along Bank Street. An excavator scraped up mounds of dirt as dump trucks rumbled past, at one point prompting a gaggle of reporters to hastily make way.

To Mayor Miro Weinberger, these were the sights and sounds of progress after years of delay.

“I’ve always believed in this project,” he said. “This is what we need to make our downtown healthy and vibrant decades into the future.”

The activity was a major milestone for CityPlace, which has overcome legal battles, changes of ownership and redesigns since first being proposed in 2014. At that point, then-owner Don Sinex promised to replace the former Burlington Town Center mall with two 14-story towers of shops, apartments and a hotel. He began demolishing the mall in 2017, but little has happened on the site since that worked wrapped up in 2018, earning it the derisive nickname “the Pit.” 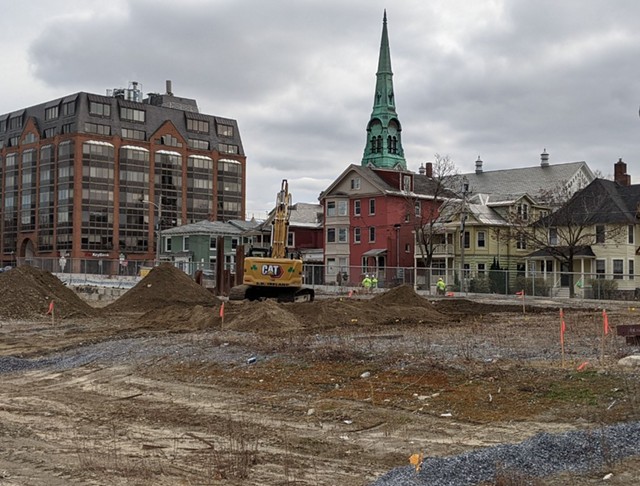 Sinex sold his shares of the project in May to three local businessmen: Dave Farrington of Farrington Construction, Al Senecal of Omega Electric Construction and Scott Ireland of S.D. Ireland, all of whom joined the mayor at the site on Tuesday morning to describe their plans.

Once complete, CityPlace will consist of two buildings of about 10 stories with 427 apartments, including affordable units that will be managed by the Champlain Housing Trust. Plans call for ground-level retail, 422 parking spaces, and a rooftop restaurant and observation deck.

On Tuesday, crews were preparing for a new foundation, which will be poured by December 1. Construction will continue through the winter, with a goal to finish the so-called “South Building” on Bank Street in 2024.

The U-shaped “North Building” on Cherry Street, which includes the CHT units, would be complete by summer 2025. At that point, work would begin to rebuild portions of St. Paul and Pine streets that were severed from the city grid by the former mall. The developers aim to finish construction by November 2025.

Burlington City Council Approves Amended Agreement With CityPlace
By Rachel Hellman
News
The partners still don’t have financing for the entire project, however. Farrington said the team “has commitments” to finance the South Building but is talking “with some potential co-development partners” about funding the North Building. Champlain Housing Trust is separately seeking financing for the affordable housing portion.

He thanked the mayor's office and his fellow partners for getting the project going.

"It's been seven months and a lot of meetings," Farrington said. "We get a to-do list, and we break it up and just pick it apart and get it done. And that's the way this project is gonna keep moving."

Correction, November 15, 2022: A previous version of this story misreported the length of time since work stopped at the site.