At Home With Art? 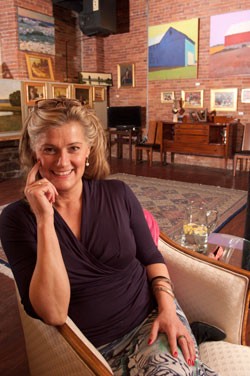 Corina Belle-Isle had one goal in selecting the paintings and sculptures in the current show at her new Burlington gallery, Lille Fine Art Salon: She wanted the work to make people “go, ‘Ahhh,’” she says, letting out a deep breath.

It would be difficult to provoke any other reaction in this subterranean Lawson Lane space: Think warm brick walls and 18-foot ceilings, a cozy kitchenette, and an inviting arrangement of sofas and chairs. And Lille’s debut exhibit, called “Reverie,” hits the mark. Images of crashing surf, dreamlike, unpopulated landscapes and contemplative still lifes work their soothing magic.

“The experience [of art viewing] is often intimidating,” says Belle-Isle, 50, handing her visitor a steaming mug of Get Gorgeous red tea. “That inspired me to start a space where people could see art as if it’s in their own home.” To that end, she’s hosting Salon Evenings every Thursday and Friday while the show is on view. Visitors can pop in, have a glass of wine and linger with the art.

Belle-Isle ran several galleries in Rockport, Mass., before opening Lille last month. A sixth-generation Vermonter, she grew up in Saxtons River and moved to Boston for college. She spent the first 20 years of her career in finance before turning to art, which she says she’s always loved.

“I never had the talent to be an artist myself, because I’m too linear and I don’t trust myself artistically,” Belle-Isle says. “But I learned that I could be helpful to artists by raising money — I’m a marketing engine. I’m a connector.”

Belle-Isle moved back to Vermont last November. Her daughter had recently graduated from high school, and Belle-Isle wanted to be closer to family and friends. She’s filled her gallery with work by many of the Rockport-area artists she represented in Massachusetts.

Many are considered Cape Ann artists — they paint in the loose, impressionistic style that originated in that area, which is home to one of the country’s oldest art colonies. Historically, those artists (Emile A. Gruppe was one of them) spent their winters in Vermont painting snow scenes, a connection Belle-Isle highlights in the exhibit.

The artwork at Lille takes up nearly every inch of the walls, and some of the floor space. Belle-Isle also loves sharing the artists’ life stories and personality quirks with her visitors. Over the years, she’s collected audio and video interviews with her artists, which she plans eventually to feature on her website. “I’m not an artist, but I’m painting an image,” she suggests.

Take, for example, her tale of Rudy Colao and Camilla McRoberts, two of the painters currently on view. They met in the 1950s in the Art Students League of New York, and married shortly after. “After they met,” says Belle-Isle, “she stopped painting.” She had children and then devoted herself to being a mother. McRoberts had studied under the American impressionist painter Frank DuMond, and her work is now part of the Smithsonian Museum collection.

McRoberts’ midcentury portraits at Lille are arresting — full of dramatic lighting and funny little details that betray the era, such as the awkward jock strap on a male model. “In 1951, men were not allowed to be naked in the studio,” explains Belle-Isle.

Then there’s painter Eugene Quinn, who’s responsible for many of the vibrant ocean scenes at Lille. “He’s a surfer,” reports the gallerist with a smile, and adds, “He only drinks Guinness.”

Jonathan MacAdam, who paints the landscape along the coastline north of Boston and the fields and rivers near Concord, Mass., is influenced by the Dutch masters. The 35-year-old paints in layers — up to 16 of them — and the surfaces of his works are thick, almost buttery.

Suzanne Crocker’s glowing paintings of barns always begin with a layer of red. Bright-red edges seep out around roofs and vibrate along the curve of a dirt path. Belle-Isle swoons when describing Crocker’s work, which she refers to as a cross between Mark Rothko and Edward Hopper — Rothko for the rich layering of color, Hopper for the light and structure. “She gives me goose bumps,” says Belle-Isle.

Jeffersonville artist Larz Allen has contributed 3-D works in the form of wood and metal sculptures and furniture. His white-oak table is held together with distinctive bowtie fasteners and supported by steel legs shaped like whale tails. The piece is a dramatic presence in Lille’s smaller room. “He’s a welder, a mastermind, a mathematical wizard,” Belle-Isle says of Allen.

There’s a reason her salon feels like a home — it is one. Belle-Isle lives there with her boyfriend. “Historically, most galleries started in people’s homes,” she points out. She lived in her Rockport gallery, too, and says it allows her to get to know the paintings in a way she might not otherwise.

She encourages prospective buyers to spend time with it, too. If someone really wants to get to know an artist before they purchase a piece, Belle-Isle says, she might even organize an intimate dinner party at the gallery, a matchup between artist and art lover. After all, most of these paintings require a significant commitment — the works range in price between $250 and $9000. Making a sale can take plenty of wooing.

Belle-Isle says she’s received a warm welcome in Burlington, but she’s still dreaming a bit bigger. She envisions opening a sister gallery in the Caribbean someday. “But I have to be careful what I wish for,” she says, “because things usually come to fruition for me.”