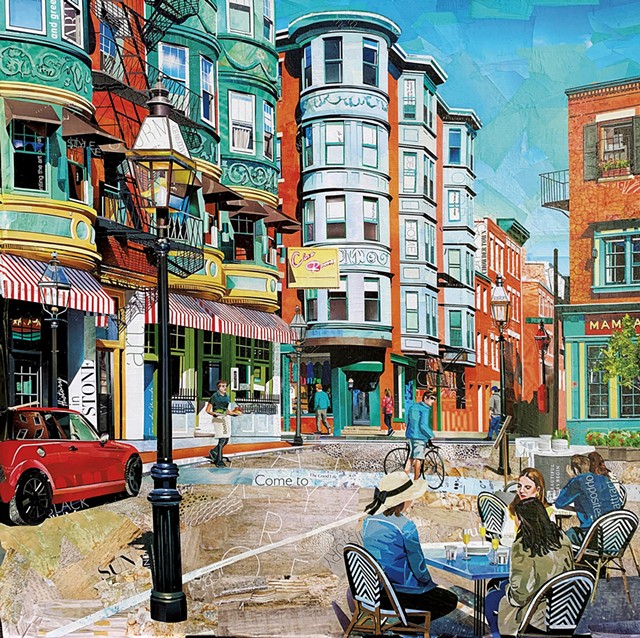 Betsy Silverman's compositions fool the eye. In photographs, or even seen in a gallery from across the room, the works appear to be hyperrealistic paintings. Viewers who take a closer look may be startled to find that Silverman's currency is actually collage. Every single detail, highlight and shadow is created with a separate, teensy piece of paper cut from magazines and seamlessly assembled. And, as if to underscore her ruse, the artist adds bits of text here and there, sometimes in a barely visible size.

Silverman joins painter Rachel Wilcox in a current exhibition titled "About Town" at Edgewater Gallery at the Falls in Middlebury. Both artists are from the Boston area, and both draw inspiration from Beantown itself. Rather than the bucolic landscapes favored by many Vermont artists — and that Edgewater typically features — Silverman and Wilcox present tableaux defined by streets, sidewalks, close buildings and the quotidian activities of urban life. You can almost hear the hiccupping thrum of traffic.

Viewing Silverman's work is a heightened sensory experience,her palette the visual equivalent of caffeine. tweet this

Silverman's collages contain astonishing detail, from the spokes of a bicycle to reflections on car doors to the plane of a cheekbone. Her training in architecture, at Rhode Island School of Design, likely explains her meticulous attention to the built environment — both the city's historic structures and its contemporary steel-and-glass additions.

Silverman acknowledges this in an artist statement: "Representing cities and towns brings my artistic process full-circle, as my interest in using recycled magazines evolved from my architectural studies," she writes. "[D]epicting these spaces fosters opportunities for me to explore the paper medium." 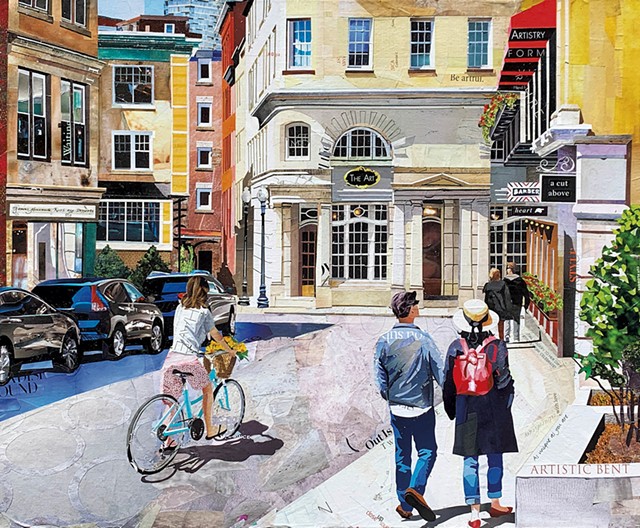 All of her collages are brightly illuminated, which perhaps says something about the saturation of magazine color printing. Silverman's scenes are not only sunlit but seem extra illuminated, as if a movie crew had set up floodlights for filming. Objects incorporate a multitude of hues — again, with separate bits of paper — to indicate shadow, reflection, folds and textures. Viewing Silverman's work is a heightened sensory experience, her palette the visual equivalent of caffeine. Or maybe dropping psilocybin.

But there is order in Silverman's energetic compositions, including the logic of perspective. Her 36-by-48-inch collage "In the Spotlight" presents a phalanx of yellow cabs, facing the viewer, as they jockey for position on a three-lane, one-way avenue. The street is canyoned by towering, glassy buildings, neon signs and electronic billboards stretching into the distance.

In contrast, all is calm and even cozy in the 36-inch-square "Chowder Town." A cluster of 19th-century buildings embraces a narrow street and a small sidewalk café hosting several patrons. A smattering of pedestrians mills about, while a server balances lunch orders in both hands. The word "Boston" adorns his apron. On a path-like strip crossing the street, Silverman slips in the text "Come to the good life." Whether or not she means this ironically, this does look like a good life, or at least a privileged one.

Wilcox, also a RISD graduate, takes a completely different approach to urban representation and to the act of art-making itself. Her oil paintings on panel or canvas are loose and gestural, less concerned with exacting detail than with mood.

"With the use of intuitive mark-making, my goal is always to simplify," she explains in an artist statement. "Patterns of form and movement, of light and shadow, are the engines behind my work."

Wilcox adds that "painting itself is always the point," but to a viewer, so is the subject matter. In this, Wilcox is succinct; most of her compositions tightly fill the frame, focusing on dense groupings of people or things, whether outdoors or in. In this selection of paintings, the relatively empty space of a sky is rare. A notable exception is the expansive "North," a 36-inch-square oil on canvas that features, from a motorist's point of view, what looks like the Leonard P. Zakim Bunker Hill Memorial Bridge. The image is half sky, punctured by the structure's swooping cables.

In "Don't Walk," a 24-by-30-inch oil on panel, Wilcox captures half a dozen people standing at a crosswalk, waiting for the light to change. It's a rainy day, which she conveys with glistening sidewalks and a cityscape in blues and black. Wilcox counters the somber hues by giving each of the pedestrians a pink umbrella. Their faces are indistinct, but their waiting body language is spot-on.

Wilcox achieves intriguing visual and psychological effects in the 36-inch-square oil on canvas "Crossing." Here the palette is murky, with a range of greens, blues and purple. Pedestrians are coming and going on a busy city sidewalk, most of them looking down at their phones yet somehow not bumping into each other.

Wilcox underscores her subjects' distraction and alienation with the trickery of paint. Their bodies are indistinct, like diaphanous sea creatures in motion. They are here but not here. Meantime, red dots in the background assert the reliable, impartial authority of traffic lights. With "Crossing," Wilcox seems to show us how our sense of security is anchored in trust, without which inattention would be perilous.

In other works, the artist offers more comforting scenarios: a couple strolling a leafy street, considering retail options ("Window Shopping"); the welcoming façade of a neighborhood hangout ("Coffee House"); interior glimpses of a well-stocked kitchen ("Pantry") or bakery display case ("Paninis"). Wilcox's close observations of urban amenities, as well as the bustle, suggest that elysian visions are not limited to pastures.

In this respect, Wilcox and Silverman share common ground: With disparate styles, palettes and mediums, both find much to love about city life. If they ignore the downsides, well, it is not the mission of art — thankfully — to bring us the evening news.

The original print version of this article was headlined "Street Smart"