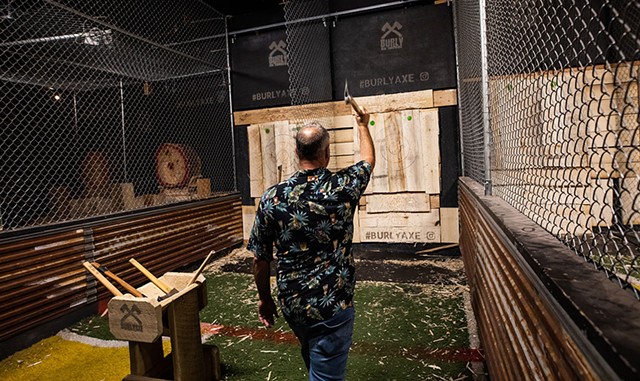 Many years ago, on "The Tonight Show Starring Johnny Carson," the host asked singer and actor Ed Ames to demonstrate his skill at throwing a hatchet. He swung the axe in an overhead delivery at a male silhouette painted on a board — and buried the blade in the figure's no-fly zone.

That fabled axe has traveled figuratively through time and firmly embedded itself in the 21st-century zeitgeist. According to local and national business owners, people age 25 to 45 are flocking to axe throwing. It's an equal-opportunity social activity that carries a frisson of danger but pairs well with alcohol. It's also a sport, if you will, that appears harder than it actually is, allowing even a novice to achieve instant mediocrity.

"I'd say it scratches a primal itch." Bryce Turner tweet this

If that sounds improbable, check out the action at Burly Axe Throwing in Burlington's Old North End. After a few tries, anyone with a pulse can look like Norse explorer Erik the Red.

"I'd say it scratches a primal itch," said manager Bryce Turner, "Also, it is legitimately fun, and it's something new."

Vermont's sole chopper club, Burly Axe opened two years ago in a garage bay at 294 North Winooski Avenue formerly occupied by Off Center for the Dramatic Arts. It offers introductory sessions, group events and mobile axe throwing. Fees start at $25; patrons must be 18 or older.

Burly has a liquor license and Turner said he will turn away anyone under the minimum age; he claimed he's yet to see a fake ID. No hard liquor is on the menu, but the club offers local beer, mead and cider, and the business hosts an axe-throwing league.

Low overhead costs allowed Burly Axe to survive the pandemic shutdown; it reopened partially in January and now hosts as many as 200 throwers on a weekend night.

COVID-19 proofing is easy, noted Turner, "when you tend to want, anyway, to be at least six feet away from the next guy throwing axes. And it's not so hard to dip an [axe] handle in bleach."

The axes — hatchets, really — weigh two pounds. Instructors teach a two-handed grip, though throwers often use a one-handed overhead swing. The target — five abutting 2-by-10 boards with stenciled concentric rings — is 12 feet away. The boards are cut from poplar, a soft wood that is more likely to accept than reject a hatchet. Chain-link fencing separates throwing lanes.

"It's a cooler version of bowling, more exciting, more intense," said Mario Zelaya, founder and commissioner of the Toronto-based World Axe Throwing League. That's the closest thing to a governing body for the sport.

The concept resembles darts, horseshoes or even cornhole, but what's a beanbag compared to a hunk of sharpened steel? After all, there's something primal about wielding a tool-cum-weapon that's gone virtually unchanged for millennia.

Humans began using axes in the Stone Age, and wielding an axe in modern times has long been the province of circus sideshows and lumberjack competitions.

The sport, often called "urban axe throwing," began to our north, claims Toronto's Backyard Axe Throwing League. When some bored friends threw an axe at a stump, it became a pastime and quickly caught on, according to the group's website. 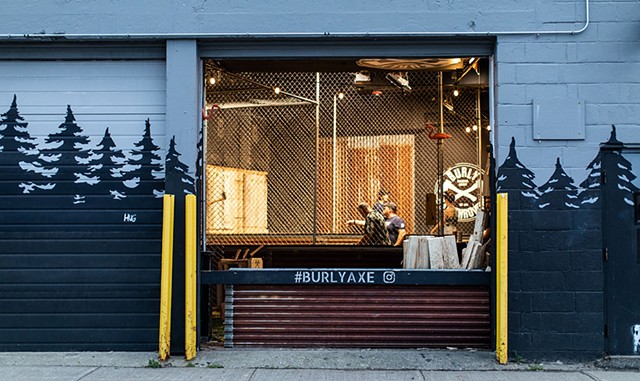 At this point, axe throwing may be just one Big Lebowski away from cult status — or even joining the increasingly exotic roster of Olympic sports. "That's the goal," said Zelaya, a marketing guru and the CEO of Bad Axe Throwing, which has 45 franchises in North America and England.

Currently, the only people winning gold are the owners of axe-throwing emporia popping up around the country; their business model is built on high volume, low overhead and beer. Market research firm IBISWorld reports that 360 venues in the U.S. produced revenue of $204 million in 2020. Researchers also find that first-timers usually come back for more.

The sport already had a track record when Mike Garber opened Burly Axe, so it wasn't a blind leap into the entrepreneurial void.

"The fact is that Burlington, charitably, is about a year behind other cities," Garber said, "so it's pretty easy to look at what trends are happening in Montréal or Boston or New York City and then say, 'Well, if it works in [those cities], then I can probably imagine I can make one work here.'"

"We let customers throw at pictures of anyone they want — it just can't be political," said Heidi Neufeld, COO of Bury the Hatchet, a chain with 16 locations in the U.S. and one in Romania. "I had my 60th birthday at one. We have romantic Valentine's Day events. I even made a special [throwing] lane in Freehold [N.J.] for a local rabbi and 10 troubled teens."

One of her Pennsylvania locations can draw 400 to 500 throwers on a weekend night, said Neufeld, and, at $30 per lane, that's not chump change. People who throw one axe want to throw more, and the danger factor is greatly exaggerated, she asserted. "I read on Facebook, 'OMG, drinking and throwing axes!' Well, you can drop a bowling ball on your foot."

At Burly Axe, Garber sells the image of woodchuck Vermont. "We like to lean more on the tool side of the axe, so we harken back to the logging and lumber history of Burlington and the Champlain Valley," he said.

On a recent Wednesday — league night — customers began trickling in to Burly Axe at 5:30 p.m. League members began practicing while the newbies gathered for the safety briefing the staffers call the "spiel": the mostly intuitive caution that boils down to "Don't be stupid."

Despite — or because of — the perception of danger, everyone, "with very few exceptions, is safety conscious and on their best behavior," Garber said. "When we do our safety briefings ... you can hear a pin drop."

Once the axes start flying, though, all you hear is the chunk, chunk, thunk of axes hitting wood, punctuated by yelps of delight and groans of sympathy. Targets usually last a week, but one large bartender from Burlington's sports bar the Other Place managed to reduce a target to splinters with three throws, Turner said.

Colorado native Olli Machina, a game-design major at Champlain College, is a Burly Axe league regular. Like other throwers, she's competing against herself, trying to score high.

A bull's-eye earns five points, the next two concentric rings earn three and one, respectively, and two small orange dots at the top of the board are worth seven points.

Machina brought along one of her professors to try throwing. "He loved it," she said. "It's just super fun. And then you start coming more often to see if you can get a better score."

Over in a double-lane area, nine coworkers from Autism Bridges, a therapeutic center based in Bedford, N.H., were chucking axes with gusto, unfazed by the occasional ricochet of an axe failing to sink. Axe-throwing venues depend on revenue from work groups, which tend to throw and drink more than individuals. Owner Garber has added a Formula One race simulator in an adjoining room in case throwers get arm-weary.

Katie Watson, a University of Vermont psychology major from Ardsley, N.Y., came to Burly Axe as a customer and found a job there.

"I had so much fun," Watson said, "just the environment ... seeing everybody drinking, having a good time. It's really cathartic. And for women, it is kind of like, you don't get to tap into this area very often in society."

Turner gleefully described large men who come in to throw: "It's hard for them to understand that a petite girl can absolutely destroy them." He added that some women on first dates told him it was "fun" to see how guys would react to the challenge of axe throwing.

While one might not associate the sport with romance, a couple from Tennessee drove to Burlington after hearing that Vermont's pandemic restrictions had been lifted. During a visit to Burly Axe, the guy took a knee and popped the question.

Commissioner Zelaya, who reckons there are 400 to 500 clubs in North America, said that many metro areas are at peak saturation but there's room for growth in states such as Vermont, Wyoming, Washington and even California. He chuckled at how his "bad boy" sport has entered the mainstream.

"Early on, when Bad Axe Throwing was looking for locations, we'd call landlords and tell them what we were doing, and it would be like, 'Sorry, you want to do what?' and they'd hang up," Zelaya said. "Now, the property owners are calling us: 'Hey we've got a great space here. What can we do to make it work?'"

Garber has had no problems with the landlord, and he admitted to being taken aback by how the business has grown. "Now you can go in, throw axes, and drink beer and drive race cars and, you know, what else did you want?"

The original print version of this article was headlined "Chop Shop"