At BEVS, Owners Spare No Expense to Save Their Pets | Animals | Seven Days | Vermont's Independent Voice

At BEVS, Owners Spare No Expense to Save Their Pets 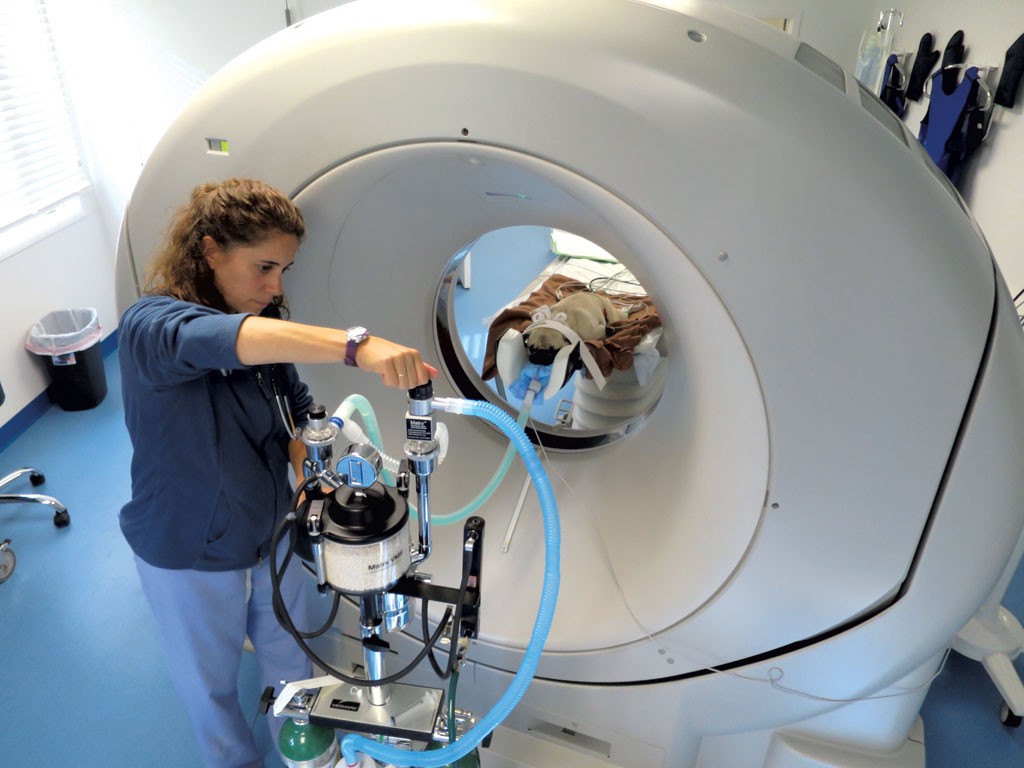 Gizmo's eyes were whirling. The 2-year-old pug couldn't focus on his mom, Wendy Beane, when she brought him to Burlington Emergency & Veterinary Specialists in Williston on a recent Monday at the recommendation of her regular veterinarian.

About a month ago, that vet in Brandon treated Gizmo for an ear infection. But last week, Beane knew something was wrong. Usually playful and able to run "like a deer" around his Proctor home, Gizmo grew lethargic. He stopped eating, vomited, and lost control of his bowels and bladder in Beane's bed. His black, bulging eyes darted back and forth, and he tilted his head sideways.

"He was staggering like he was inebriated," Beane said.

So Gizmo came to BEVS, an animal hospital that opened a decade ago and treats dogs, cats and other small pets from across northern Vermont. The sole source for 24-7 emergency veterinary care across greater Chittenden County and part of New York, it also draws business-hour customers like Beane as one of the state's best-equipped care centers.

When it comes to animal catastrophes, BEVS sees it all. Last week, a surgeon there removed a corn cob from a Labrador retriever's intestine, repaired the mutilated jaw of a cat and examined the arthritic elbow of a golden retriever who is an obedience champion. Meanwhile, the internal medicine staff cleared a cat's urinary blockage, tested a cocker spaniel with Cushing's disease and monitored a gastrointestinal infection plaguing two sister Chihuahuas.

Dr. Bryan Harnett, BEVS' medical director and one of two internal medicine specialists who own the practice, gave Gizmo a diagnosis. The pug's ears had swollen shut, throwing off his equilibrium, he explained: "It makes it so the world is sort of spinning on you."

Harnett wanted the pug to undergo a CT scan to rule out a polyp or tumor. The scan costs about $1,250 in most cases, including the mandatory anesthesia and vet consultation.

Beane, a dental hygienist, said her boss — who has four dogs of his own — had insisted she leave work to take care of Gizmo. A couple of years ago, she and her husband lost their first pug in a terrible accident and brought home Gizmo and his brother, Truman, from the same litter soon after.

She's not alone: Many American dog owners spoil their pets with expensive bedding, home-cooked meals ,and vacations at resorts that dispense treats, toys and sweet-smelling plastics for poop pick up. And when it comes to pets' health care, technological advancements in veterinary medicine make it easy to go to extremes.

"People who come to us are looking for that," said Brenna Mousaw, a BEVS vet tech with a specialty in internal medicine. "They'll do the surgery. They'll do the chemotherapy. They want to give their pet the options that they can."

Steffan DeFeo can vouch for that. His 9-year-old rat terrier, Mitzie, suffers from a host of problems. In November, she was diagnosed with bladder cancer and had surgery to remove most of the tumor.

A few years ago during surgery for a torn knee ligament, doctors discovered that Mitzie has high liver enzymes and can't process copper. A lab in Virginia designed a special diet — for a very high cost — that DeFeo prepares for her and the couple's fox terrier, Sadie. It includes fresh chicken, canned clams and minerals such as phosphate that he has to mail order.

The drug Mitzie took for her liver caused side effects, including an immune disease. She ended up on a steroid that recently led to diabetes and, now, cloudy cataracts in her eyes.

A veterinary ophthalmologist can remove the cataracts, a common procedure that costs about $4,500, DeFeo said. First, though, BEVS tested Mitzie's blood sugar multiple times to ensure she could handle surgery — requiring a break in her insulin shots, which DeFeo gives her twice a day. 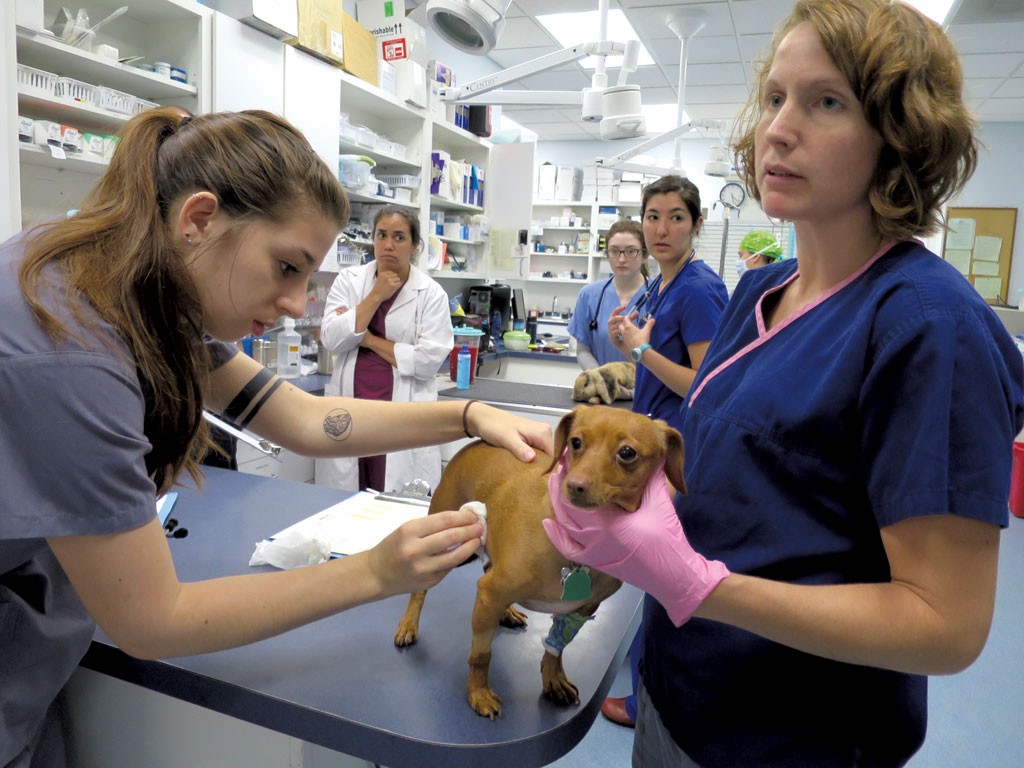 "I'd mortgage my house for her," DeFeo said, as he sat on the floor in the BEVS waiting room beside the dog bed he'd brought for Mitzie.

In a way, Mitzie saved DeFeo's life. An army veteran, he got Mitzie as a pup in 2005, a few months after returning from his tour in Iraq.

"She was inseparable from me for years," he said. "It was just nice to have a companion who didn't want to talk to you about everything."

DeFeo and his wife, Hiata, are both 44 and live outside Waterbury, where she owns Bridgeside Books. They have easily exceeded $10,000 in vet bills, DeFeo said.

"It's commitment," he said with a shrug. "We chose to get a pet. This is what goes along with it. You don't give up on them just because it's a dog."

Before BEVS, Burlington-area vets handled night and weekend emergencies with rotating on-call duty, eventually working out of VCA Brown Animal Hospital in South Burlington. In July 2005, BEVS became a standalone business with its own staff and moved to its current building on Commerce Street.

The facility remained solely an after-hours emergency clinic until Harnett's arrival in 2007, when it began offering specialty internal medical care for weekday appointments and walk-ins. He and Tom Hecimovich, emergency and critical care services director, took over the business as co-owners. BEVS now has 10 doctors, including two in one-year postgraduate internships, and an additional surgeon on the way, plus 35 technicians and six support-staff members.

Late one evening last week, technician Keely Doyle wrapped one hand around all four paws of Missy Bob, a 7-year-old domestic shorthair tortoiseshell cat, and gripped the scruff of her neck with the other hand. Tortoiseshells, Doyle explained, are often feisty. Missy Bob had an infected cut over her eye from a fight, and Dr. Lisa Kiniry needed to clean the wound.

"We popped it and flushed it," Kiniry told the owners, Judy Emerson and Jake Yanulavich, when she returned Missy Bob to them in her carrier.

The Winooski couple decided to make their emergency visit to BEVS when the cat's cut still looked runny after three days. "It can go bad really fast, and we didn't want to wake up in the morning with something really nasty," Yanulavich said.

Most vets do basic surgeries such as spaying and neutering in their offices but send patients to a specialist for more complicated problems such as cancer treatment. General practices often cannot afford major equipment that they would use infrequently — such as an ultrasound or CT scanner, the latter of which BEVS added in 2013. The huge machine didn't fit in the hospital, said Whitney Durivage, the hospital manager, but a tenant's move freed up an office in the building across the parking lot.

Now BEVS offers Vermont's first CT scanner for pets, Durivage said. "We used to have to send clients to Montréal, Maine and down to Massachusetts."

Inside the giant tubular scanner on the Tuesday after he arrived, Gizmo lay prone and motionless under anesthesia. Harnett examined a bank of computer screens showing images of the pug's head and ear canals. They were, as he suspected, completely blocked.

"This tells us in much better detail what the tympanic bullae look like," Harnett said. "He's probably going to need surgery to go in and open up these little structures at the base of the skull."

A little while later, Beane arrived, still wearing her work scrubs, to visit Gizmo before he spent the night at BEVS. Harnett carried him to her wrapped in a blanket, because patients can get cold after anesthesia.

"He gave me some kisses, and it just melted my heart," Beane said.

Dr. Helia Zamprogno was scheduled to do Gizmo's surgery, known as a TECABu (sounds like "peek-a-boo"), for total ear canal ablation and bulla osteotomy. It involves removing the entire lining of the ear canal, then reclosing the ears. The dog will lose his hearing — but he probably couldn't hear with the blockage anyway, Zamprogno said. She hoped to stop Gizmo's nerve damage from progressing: "The goal is to control the infection, control the pain."

The day Gizmo came in, Zamprogno operated on Diesel, a 12-year-old Australian cattle dog known as a blue heeler, whose head had been crushed by a truck wheel. She cemented his jaw in place and closed wounds on his underside.

Diesel's dad, Jaret Pullen, came to pick him up after spending a couple of sleepless nights at home in Charlotte, calling BEVS continually to check on his "best friend." Diesel goes everywhere with Pullen, 34, a horse farrier who hopes to attend vet school soon.

He told BEVS to do whatever was necessary, he said: "You break the piggy bank open. You shell out the credit cards."

Doyle gave Pullen lengthy instructions on medications, cold compresses and meals. Then she brought out Diesel.

Pullen's eyes welled as he hugged the dog, who slowly wagged his tail and drooled a little. Then Diesel's dad stepped to the counter to pay the bill, which topped $5,000, handing over first a stack of cash and then a credit card.

"I'm as unemotional and coldhearted as you can be," Pullen said, "except about my dog."

Not every family gets such a happy ending at BEVS. Harley, a 13-year-old vizsla, came in one night last week with fluid around his heart. The next morning, viewing the Hungarian bird dog's ultrasound, Harnett saw a mass in his heart tissue.

"That's not the treatable kind," lamented Dr. Amanda Rutter, who examined Harley when he arrived. Later the next day, Harley's owners came to BEVS with their sons, who had grown up with the dog, to put him to sleep.

"If I start crying, I'll never stop," said technician Lindsay Hancock, who helped hold Harley during his ultrasound. "I work with techs who cry every time, but I'd be exhausted. Everybody deals with it differently."

For his part, Gizmo will be fine — even without his hearing. Eventually he'll return with Truman to the Beanes' camp in Rochester, where he goes snowmobiling and ice fishing, his mom said.

Beane said she was grateful for BEVS, offering a pet owner's highest praise: "I feel like they're treating him like he's their own here."

The original print version of this article was headlined "Pet Causes"