At a Vermont Brain Bank, Researchers Wrap Their Heads Around PTSD 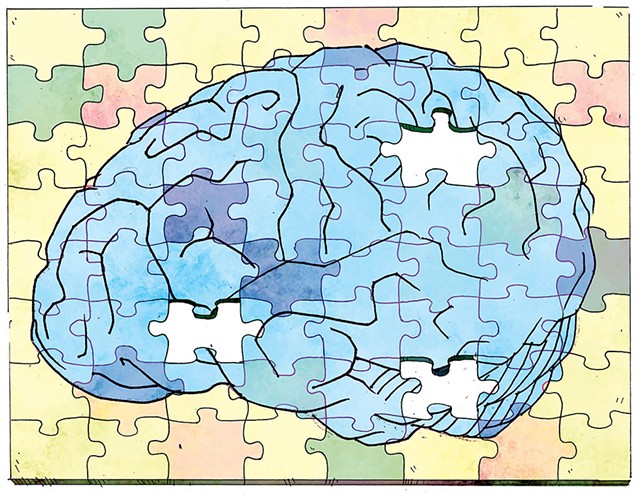 When Dr. Matthew Friedman finished his residency in psychiatry at Dartmouth-Hitchcock medical center, the only job he could find was as a staff psychiatrist at the White River Junction VA Medical Center.

"I told everyone I'd do this for a year and then find something interesting to do," recalled Friedman. "That was 1973, and here I am, still at the VA."

Landing that job, in the waning days of the Vietnam War, was serendipitous for Friedman, who did indeed find something interesting to do: He became a pioneer in the study of posttraumatic stress disorder. In 1989, Friedman was instrumental in founding the U.S. Department of Veterans Affairs' National Center for PTSD in White River Junction, which he led for the following 25 years.

Now 78 and a senior adviser to the center, Friedman is helping researchers "boldly go where no one has gone before" — not into the wilds of space, but deep into the brain cells of people with PTSD. In 2014, he and his colleagues founded the National Posttraumatic Stress Disorder Brain Bank, the first and only brain bank in the world devoted exclusively to PTSD research. It's a resource that could lead to a paradigm shift comparable to the origin of the PTSD diagnosis itself.

Spoiler alert: There is no room full of frozen brains in White River Junction. Just as financial banks don't keep drawers full of cash with depositors' names on them, the PTSD Brain Bank doesn't store its actual tissue samples in Vermont. It's a consortium of institutions that includes research facilities in Boston; Durham, N.C.; Miami; West Haven, Conn.; and Bethesda, Md.

Those institutions do, however, study actual frozen brain hemispheres. They are housed in a Boston repository along with samples from other brain banks focusing on such problems as traumatic brain injuries, Alzheimer's disease, amyotrophic lateral sclerosis (Lou Gehrig's disease) and chronic traumatic encephalopathy.

"We're at a point where the science in the next five to 10 years is going to unlock a lot of information, and we're hoping the brain bank accelerates that," said Dr. Paula Schnurr, executive director of the National Center for PTSD and a longtime colleague of Friedman's. "It's the kind of data we haven't had before."

Those data have been a long time coming. When Friedman got into this work in the early 1970s, the term "PTSD" didn't exist. No single name encompassed the constellation of symptoms — fear, agitation, anxiety, insomnia, depression, flashbacks, nightmares and self-destructive behavior — that Friedman saw in the veterans who were coming home from Vietnam. All he knew was that these men and women were suffering tremendously, and he wanted to help them.

"We didn't know what the hell it was," Friedman recalled. The label initially assigned to the condition, "post-Vietnam syndrome," did little to help clinicians understand its root causes, let alone devise effective treatments.

In those days, he said, psychiatry was still dominated by Freudian psychoanalytic theory, which attributed such symptoms to developmental abnormalities rooted in the patient's parents and upbringing. Most clinicians believed, in other words, that these patients had psychological weaknesses before they went to war that prevented them from processing the horrors they experienced.

Friedman rejected that theory. Originally trained as a pharmacologist in the 1960s, he had studied how opioids such as heroin change the brain functions of addicts, a phenomenon now known as neuroplasticity. Friedman believed traumatic experiences could alter brain functions in similar ways.

Today we know that PTSD has been around for as long as humans have been exposed to life-threatening situations. "Until the mid-19th century, it was the province of poets, playwrights and novelists," Friedman noted.

Indeed, accounts of the condition, called Heimweh in German and maladie du pays in French — both translate as "homesickness" — date back at least 3,000 years, according to a 2014 exhibit on PTSD at Norwich University's Sullivan Museum and History Center. The ancient Greek historian Herodotus, recounting the battle of Marathon in 490 BC, described an Athenian warrior who went blind after a soldier beside him was killed, even though he himself suffered no physical wounds.

During the U.S. Civil War, the condition was called "soldier's heart" and was so widespread that army doctors pleaded with president Abraham Lincoln's war department to screen recruits for susceptibility to psychological breakdowns. During World War I, doctors labeled it "shell shock," believing the condition was a neurological response to explosions. During World War II, it became known as "battle fatigue" or "combat neurosis" and was seen as a psychiatric abnormality.

Not until recent decades, Friedman said, did people begin to understand how something that didn't cause bleeding or broken bones could be debilitating for a lifetime. In 1980, when the American Psychiatric Association formally adopted the PTSD diagnosis, "It was a major paradigm shift in American psychiatry," he said.

"The brilliance of the PTSD construct ... was that the focus became less on the specific cause than on the consequences," Friedman added. Suddenly, clinicians who'd been treating patients with similar symptoms and disparate backgrounds — Nazi death camp survivors, abused children, refugees, battered women — could now pool their knowledge and resources.

Fast-forward to 2019. What does getting access to brain tissue give researchers that brain scans of living patients cannot? A microscopic perspective, Friedman explained, that could result in a new paradigm shift.

"A brain scan is like looking at the ocean through a telescope," he said. "In order to know what's going on inside the ocean — the kinds of fish, the environmental conditions, what type of pollution there is — you need to get your hands wet."

Plumbing the murky depths of PTSD, in other words, means knowing what's going on at the cellular level. Specifically, researchers want to see what happens with RNA, or ribonucleic acid, a molecule that's key to the coding, decoding, regulation and expression of genes.

"RNA is like a keyboard," Friedman said. "It's got black keys and white keys." When the brain has to process and respond to highly stressful circumstances, "it all depends on what harmonics are actually sounded."

The PTSD Brain Bank allows researchers to study the postmortem brains of people with similar or even identical genetic material, such as twins, who responded very differently to the same trauma. Knowing how PTSD changes the brain at the cellular level, Friedman said, is the next frontier in understanding how to diagnose and treat it.

"The brain bank should enable us to ask questions that were inconceivable [to answer] even five years ago," he said.

By year's end, Friedman estimated, the bank will have 300 brains in its possession. Many of them came through medical examiners, with permission from the next of kin. Some of the deceased were diagnosed with PTSD only after they died. Typically, brain bank researchers make such postmortem assessments only after rigorously reviewing the deceased's medical records and clinical diagnoses, as well as interviewing family members and reconstructing the donors' life experiences.

Moving forward, Friedman said, the bank aims to get people to commit to donations before they die. Researchers will then be able to gather vital data in advance, such as histories of the donors' upbringing, their exposure to traumatic experiences, and their physical and mental health diagnoses.

The VA has other brain banks, but the PTSD Brain Bank is unique in that it accepts brains from civilians as well as veterans, Schnurr said, which it does for a couple of reasons. First, researchers need non-PTSD brains to make comparisons and use as control groups. Second, Schnurr pointed out, the vast majority of people in the United States who have PTSD are not military personnel but civilians who've experienced car wrecks, violent crimes, and other human-caused and natural disasters.

All this research, Schnurr emphasized, is reshaping how clinicians see PTSD as a lifelong disorder.

"When I came into the field ... the general thinking was how to help people cope with their symptoms," she said. "But as the science of treatment has evolved, it's very clear that we can treat PTSD."

Future treatments are likely to vary widely, Friedman said. He predicts that researchers will eventually identify several subtypes of PTSD, perhaps based on gender, age, the nature of the trauma and types of social supports.

"One size will never fit all, because PTSD is not [a single] entity," he added. "In my opinion, it's a spectrum disorder."

Friedman isn't ready to use the word "cure" when discussing PTSD. But he noted that his former colleague, Dr. Patricia Resick of the Duke University Medical Center, has 10 years' worth of data on women she's treated for PTSD from sexual trauma. Many have remained asymptomatic, an outcome Friedman described as "long-term remission."

Has the work of the PTSD Brain Bank resulted in any major scientific advances or breakthroughs?

"Nothing that's ready for prime time yet," Friedman acknowledged. "But the brain bank is going to make its mark in the foreseeable future as far as advancing the science. Come back and speak to me in six months."

To learn more about the PTSD Brain Bank, including how to donate, call 800-762-6609 or visit research.va.gov and search "brain bank."

The original print version of this article was headlined "Gray Matters"