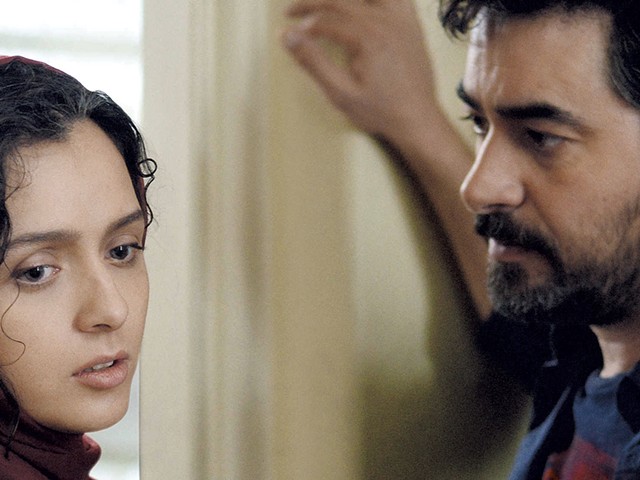 The Green Mountain Film Festival turns 20 this week with a Friday evening screening of Ken Loach's blue-collar British drama I, Daniel Blake, launching a nine-day movie marathon in Montpelier. But the GMFF isn't dwelling on the past in its anniversary year. The progressive program includes a strong focus on female filmmakers and a glimpse at the potentially game-changing technology of virtual reality.

The GMFF Virtual Reality Salon, a free event that will be held on four separate days at Montpelier's Center for Arts and Learning, features the interactive VR film "Island Land." The suite of linked 360-degree videos from Portland, Maine-based Yarn Corporation blurs the line between reality and imagination through an immersive tour of a coastal community. Its signature scene plunges the camera beneath the sea and lets viewers swim with lobsters in an underwater trap.

Virtual reality is "such an emerging media right now, and really kind of hitting all of the major festivals, so we're really proud and very fortunate to be able to bring it here," says Rachelle Murphy, the festival's executive director. "I'm so excited about this. I cannot wait to see how people react with it."

The 2017 GMFF program totals 49 feature films and 31 shorts, most of them curated and some submitted for consideration through the website FilmFreeway.com. According to Murphy, women directed 48 percent of films in the fest. That was a conscious decision by the all-female programming committee, she notes, to spotlight the work of women behind the camera.

"As a woman, I feel very strongly that women need to be more visible in the film community," Murphy says.

In a nod to GMFF's history, the fest will feature a panel discussion on March 18 with former staff and board members of Focus on Film, the festival's parent organization. GMFF cofounder and longtime programmer Rick Winston will host a talk on March 25 about the Hollywood blacklist of the 1940s and '50s. The event will include clips from the 1954 independent film Salt of the Earth, which was banned by the U.S. government for its alleged communist message.

Speaking of bans, the program features two screenings of the Iranian drama The Salesman, which won the Oscar for Best Foreign Language Film last month. The film's director, Asghar Farhadi, made headlines when he refused to attend the Academy Awards ceremony in protest of President Donald Trump's travel ban, which barred citizens from Iran and six other predominantly Muslim countries from entering the U.S.

Following a contentious Hollywood awards season, GMFF isn't afraid to dip its toes in the political waters. "We are delighted to bring you the best films from around the world — no ban here: we support filmmakers from all countries and backgrounds," the program guide states.

Murphy acknowledges that it was a difficult task to assemble the program during a politically volatile time. But she says she's thrilled with the final lineup, which ranges from the abortion-rights documentary Jackson to the Swiss-French stop-motion animated feature My Life As a Zucchini to Terence Davies' Emily Dickinson biopic A Quiet Passion to a program of student shorts from Iran, Laos, South Africa and the United States.

"[Film] is a reflection of what's going on in the world today, and so putting together a program can be tricky, because you are essentially shaping the viewpoint of the festival," Murphy says. "I think the programming team really stepped up and came together, and I think we did a really nice, balanced job."

Green Mountain Film Festival, March 17 to 25 at the Savoy Theater, Pavilion Auditorium, Center for Arts and Learning, and Vermont College of Fine Arts, all in Montpelier. $7-15 per film. gmffestival.org