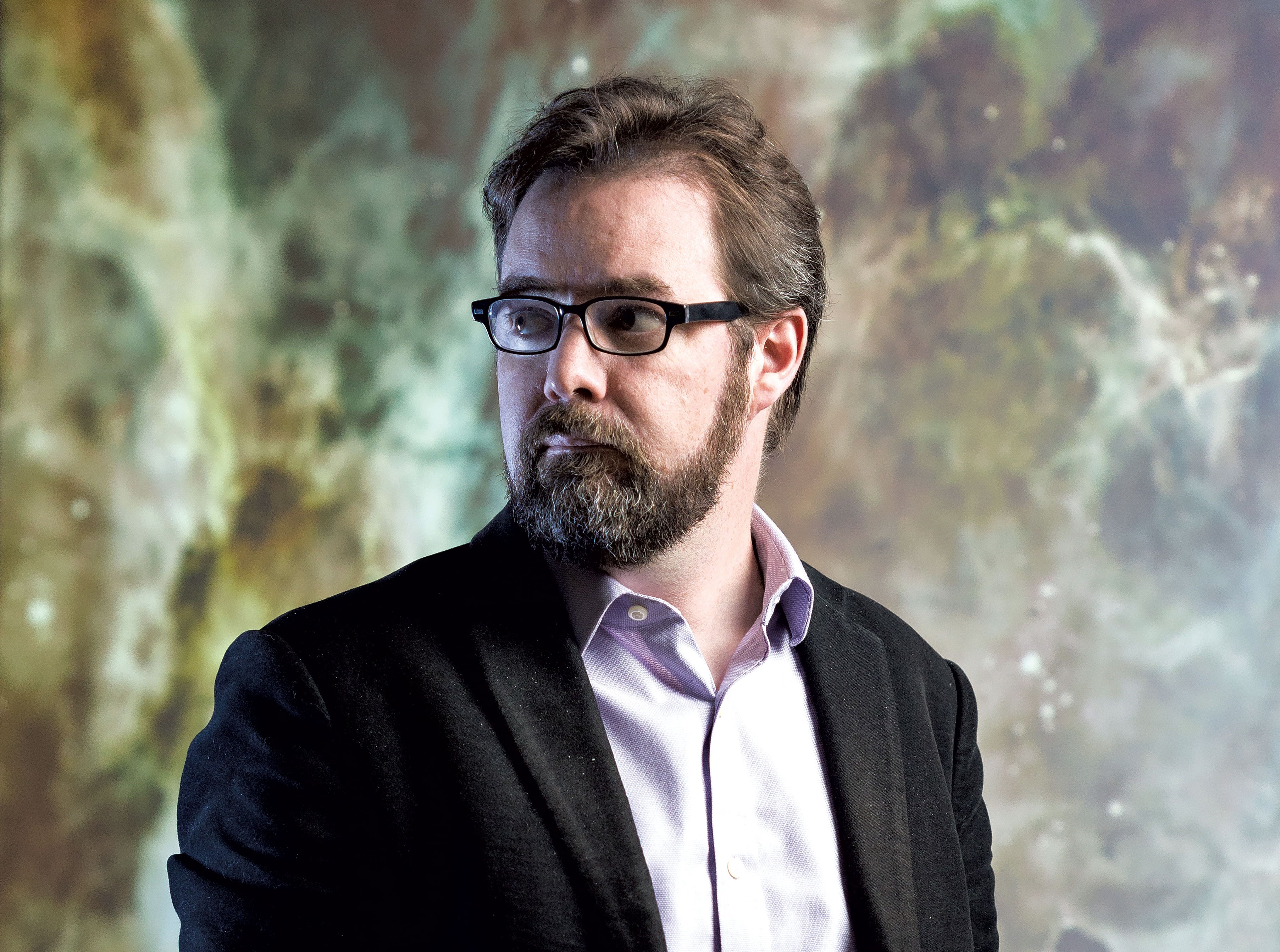 John O'Meara is into history — deep, deep history, before the Earth, solar system or Milky Way galaxy formed. The 41-year-old physics prof at Saint Michael's College spends much of his time studying objects 10 billion light years away, created shortly after the big bang.

O'Meara had no backyard telescope growing up in Denver, Colo. But once at grad school, at the University of California, San Diego, he was dispatched to Hawaii to work on the world's largest visible-light telescope.

"When you get to drive that kind of bus," he says of the W.M. Keck Observatory at Mauna Kea, "you get hooked pretty quickly."

He's returned there 47 times. In 2011, O'Meara and his research colleagues used light from distant quasars to learn how galaxies absorb gases from the "circumgalactic medium" to create new stars; Science magazine listed it as one of the top 10 scientific discoveries of that year.

"It got us a lot of press and really inflated our egos," O'Meara says. "I immediately started appearing in films with Scarlett Johansson."

He's joking, of course. Still, O'Meara has become a Vermont star in the physics world, regularly landing research time on the Keck, at Chile's Las Campanas Observatory and on the Hubble Space Telescope, which orbits the Earth. Occasionally, he even helps NASA "referee" research time requests on the Hubble and Keck, the latter of which costs $100,000 per night to use. And he's spoken to Congress about why astrophysical research is so important.

When he's not exploring his own work, associate professor O'Meara is teaching astronomy and physics to St. Michael's students; he chairs what he calls the "new-old-new" physics department, which used to be paired with chemistry.

O'Meara says he's happy to be in a liberal-arts setting rather than at a massive research university. "I didn't want to periodically show up and say hello to my TA who teaches my 700-person class," he says.

The professor sat down with a reporter last week to entertain questions about observing space from space, Einstein's theory of general relativity and our tiny place in the universe.

SEVEN DAYS: Is it difficult doing your research at a small Catholic college versus a large research university?

JOHN O'MEARA: I don't think it's a hindrance. One of the nice things about my field is that it's kind of like being a Navy SEAL: Drop me off anywhere in the world with a laptop and an internet connection, and I can do research astrophysics. In the modern era, it isn't site-specific. I don't have to be right at the telescope all the time with a smoking jacket and a pipe.

SD: How much time do you get on the Hubble?

JO: Hubble, like most major research observatories, is something you apply for on either a yearly or six-month cycle. With ground-based observatories, it's based on the Earth's orbit around the sun. For the Hubble, typically you'll propose time in March, it'll go through review in April or May; then you find out whether you get the time in July. The observations could take another nine months to actually happen. So from design of an idea to actual "light down the bucket" can oftentimes be over a year. This makes the game interesting to play if you're working with telescopes on the ground, because if there's bad weather, that idea you had a year ago? Sorry, you're out of luck.

SD: Is there one concept in astrophysics you still find difficult to grasp?

JO: One of them is just the immense scale of it all. There are only so many times you can say, "If the Earth is a grain of sand, then the sun is a beach ball, and Pluto is 200 miles away," or something like that. That works OK, but that's just for the solar system. For the galaxy and the space in between galaxies and grasping the immense size of it all, I've just given up.

SD: Can anyone truly comprehend the science you do without a firm handle on the underlying mathematics?

JO: Oh, certainly. Look at it this way: People have been doing astronomy ever since people have been looking up. People have been counting things in the sky and writing that down for thousands of years. The only thing that has really changed is our tools. Sure, when you introduce atomic physics and quantum mechanics into it, the mathematics becomes difficult. String theory is exceedingly hard to understand. Quantum field theory is difficult to understand. General relativity is easy to describe but, mathematically, extremely hard to work with. But, at the end of the day, true astronomy is looking up at the sky, seeing where things are and how they move and change over time. Anybody can do that.

SD: Is there one space discovery you hope to see in your lifetime?

JO: We are on the cusp of definitively showing that there is life of some sort on other planets orbiting other stars. I've been privileged to work with people who are working on the concept for the High-Definition Space Telescope — the next great space telescope. This thing will be able to take images of planets, take spectra of their atmospheres, and look for methane and ozone in their atmospheres. Those are biomarkers for some sort of life. My kids are growing up with the commonplace knowledge that there are planets around other stars. When I went to school, that wasn't the case. Their kids will grow up knowing there is life on some of them. Hopefully, that will happen on the timescale of my life and will be one of the most fundamentally awesome discoveries mankind has ever made. That will be the next time astronomy truly changes the world. So it's a privilege to be a small part of that.

The original print version of this article was headlined "Star Struck"