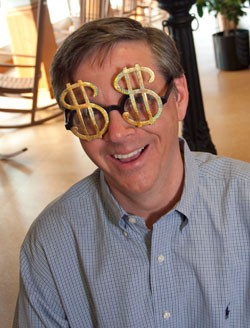 Guess how much Vermont high school seniors know about personal finance. Virtually nothing, according to a 2008 survey of financial literacy conducted by the national financial education nonprofit Jump$tart Coalition for Personal Financial Literacy.

Our students are in good company. From 1997 to 2008, students across the United States received failing grades in the biennial survey. Of the nearly 7000 surveyed, the majority didn’t know the difference between sales tax and income tax. The mean survey score was just 47.5 percent.

John Pelletier wants to change that. As director of the Center for Financial Literacy at Champlain College, he has the mission of getting students, from kindergarten through college age, on a path to financial competency. He wants them not just to be able to balance their checkbooks but to understand 401(k) plans and the wonder that is compound interest. He dreams of high schoolers understanding words such as “equity” and “asset” and using them in sentences. And, if undergrads could speak with authority about mortgage rates and credit scores, Pelletier would be in heaven.

A lawyer by training, Pelletier came to Champlain from the financial sector in Boston, where he worked in asset management. Over the years, he says, he came to see the value of financial literacy and to understand just how detrimental financial ignorance could be. After moving to Stowe, he approached Champlain’s president, David Finney, with an idea about how to increase students’ knowledge of personal finance — create an education center focused on developing and promoting financial literacy skills for K-12 students, college kids, teachers and other adults. Finney told him to run with it, and, in December 2010, the center was born.

Pelletier, a compact man with a slight Boston accent, likes to draw parallels between personal-finance education today and sex education in the 1960s. “Parents didn’t want to teach it; teachers didn’t want to teach it; nobody was talking about it, but the consequences if kids get this stuff wrong is life altering,” he says. Because of the similar silence that now surrounds personal finance, he argues, many young people find themselves in treacherous straits.

“The damage someone can inflict on themselves, other people and the economy with a credit card is pretty severe, but we don’t give them any training on that,” Pelletier says. “I wish more were done about that.”

Few high schools today offer personal-finance classes, and even fewer require students to take them. That hasn’t always been the case: In midcentury schools, financial literacy was taught as part of math or economics. As schools responded to mandates to meet tougher academic standards, personal finance was edged out of the regular curriculum and moved to electives like home economics. When home ec was phased out of American high schools, personal-finance classes lost their home.

Today, thanks to driver’s ed, high school students are better versed in parallel parking and U-turns than they are in stocks and bonds. Pelletier would like to see students as comfortable deciphering their bank statements as they are behind the wheel.

For the center’s first operational year, Pelletier has outlined a three-pronged approach to increasing the financial literacy of students all over the state. With funding provided by a number of Vermont banks, the center is sponsoring three programs — student credit counseling (What’s My Score?), the Vermont Financial Literacy Summit and the Vermont Teachers Financial Literacy Summer Institute.

Working with the college’s LEAD (Life Experience & Action Dimension) program, a mandatory life-skills curriculum, the center has so far offered free credit counseling to 34 Champlain students. Most of them had never seen their credit score before, says Shelli Goldsweig, director of LEAD, and many didn’t know the difference between a credit score and a credit report.

“It gets students off to a good start before there’s trouble,” Goldsweig says. “Many still do have good credit, but, if not, they’re young enough to turn it around.”

This year, the LEAD program began requiring a financial-sophistication element for juniors, putting its work right in line with the goals of the new center. Without funds raised by CFL and Pelletier’s industry contacts, Goldsweig adds, Champlain would never have been able to offer students this kind of service.

The center’s second project — the financial literacy summit — was slated for March, but it was snowed out and rescheduled for June 16. The goal of the summit, says Pelletier, is to raise awareness in the public policy arena about the need for more personal-finance education across the board — in schools, in colleges and in communities for adults.

Pelletier’s most ambitious and long-range project is the financial literacy summer institute, which is aimed at providing middle and high school educators with tools for incorporating personal-finance lessons into their classes. Since most local school administrations are unwilling or unable to mandate, or even offer, financial instruction, it needs to be integrated into all areas of study, says Art Woolf, an economics professor at the University of Vermont and president of the Vermont Council on Economic Education.

The institute, which is part of a national pilot project for financial literacy education, runs for a week and allows teachers to earn three master’s credits. Over three years, Pelletier hopes to educate 105 teachers through the institute.

Vermont’s educators may particularly need the help, because our state, argues Woolf, is “way behind the curve” in terms of financial education.

One teacher who’s already doing something about that is Dave Lamberti of Burlington High School. Students in his personalfinance and economics class get instruction in everything from living within their means to filing taxes. Lamberti, who is on the CFL advisory board, says he tries to get his students to understand that, regardless of their upbringing or career aspirations, financial literacy needs to be a part of their lives.

“I tell them, no matter what you do, everyone thinks about money every single day,” Lamberti says.

Financial literacy, he explains to his students, is virtually the most important subject they’ll learn in high school. No one is going to lose a house to foreclosure because he or she never read Chaucer or learned about the War of 1812. Yet most students graduate from high school with little more than a basic understanding of personal and global finance.

Now, says Pelletier, the recession has trained a spotlight on the gaps in our collective financial literacy. Students are starting to see its importance. And catching them while they’re young makes all the difference.

Champlain College is hosting the first Vermont Teachers Financial Literacy Summer Institute in Burlington from August 1 to 5. The institute is open to Vermont middle and high school teachers interested in gaining competency in teaching personal-finance topics, such as credit, budgeting and investment. Tuition is $1200, with complimentary room and board based on need (commuting distances in excess of 40 miles). Scholarships are available, and applications will be accepted through May 6. To apply, or for more information, contact cfl@champlain.edu or 860-2744.