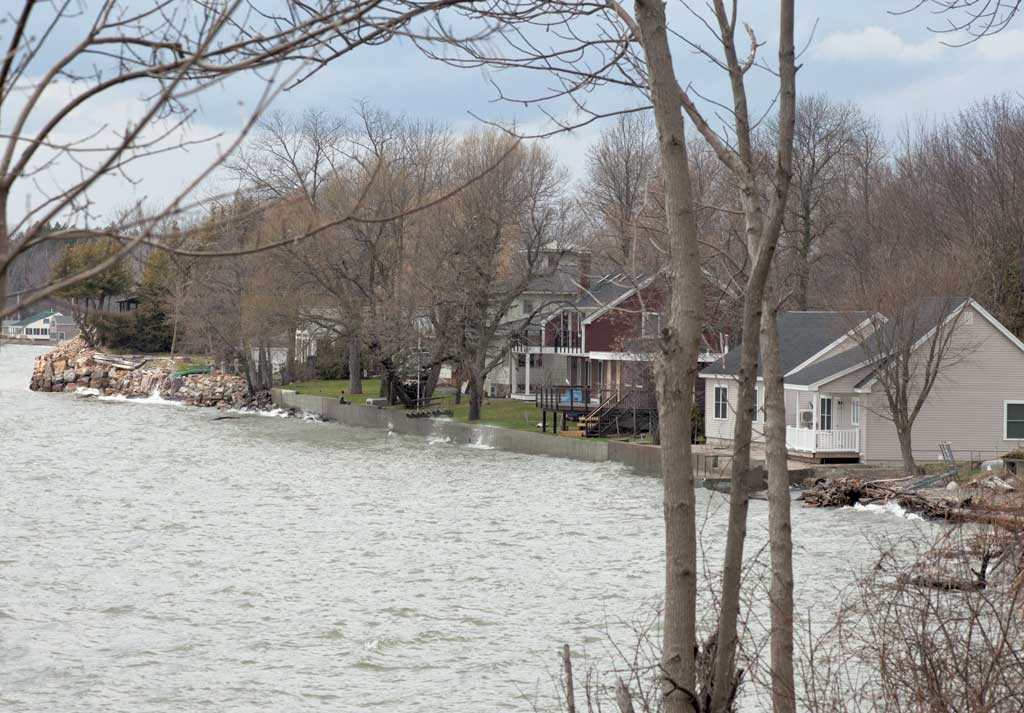 "What is the value of the left-hand member of a pair of $4 gloves?" That's how Chittenden Superior Court Judge Geoffrey Crawford characterized a 2011 legal dispute between the town of Colchester and 44 owners of mostly seasonal cottages, or "camps," on the shores of Lake Champlain. At issue for the court was whether the town was legally justified in reassessing the value of those camps for tax purposes, based on both the fair market value of the buildings and certain "intangible" factors, such as the aesthetic worth of the land on which they sit.

That question may not matter to the vast majority of Vermont homeowners, who own both their house and the ground it sits on. However, a small percentage of Vermonters own houses on so-called "leased land" — typically seasonal cottages, vacation homes and hunting camps, but also some year-round residences. These lessees own the structures themselves but lease the lots from larger landowners, who control, via the lease, how that land may be used. Typically, those leases last from five to 25 years and are renewable at the discretion of the landowner.

The Colchester case, which went to Superior Court in April 2012, had the potential to affect not only the municipality's 293 leased-land homes — it has one of the largest portions of leased land in Vermont — but thousands of others throughout the state, most of which dot the shores of Lake Champlain from Addison to St. Albans Bay.

The case also shone a light on a little-understood and somewhat anachronistic real estate arrangement. Burlington real estate attorney Liam Murphy, who represented the more than 100 plaintiffs who eventually joined the lawsuit against the town of Colchester, explains that leased lands are not unique to this state. The practice has roots in feudal Europe and has existed in Vermont for more than a century. Often farmers lease pastures and hunting camps as a way to supplement their incomes.

But those leases, which can be written in far-from-legal language — some set their terms for "as long as grass shall grow and water shall run," Murphy notes — now have to wrestle with such 21st-century concerns as environmental liabilities, disaster-recovery funding and the impact of global warming.

Indeed, many of the houses in Colchester damaged in the 2011 floods were on leased land and didn't qualify for federal disaster assistance because they weren't primary residences. Ultimately, the lawsuit raised a simple yet important question for potential homebuyers in Vermont: What are the pros and cons of investing in a house that's built on someone else's land?

As Colchester town assessor Bob Vickery explains, the seeds of that legal dispute were planted in 2008, when the Vermont Division of Property Valuation and Review informed the town that it had to correct inequities in its property-tax rolls. Throughout much of the 2000s, market prices for leased-land camps and dozens of other lakefront properties skyrocketed relative to other Colchester real estate. However, the town hadn't adjusted its property-tax bills to reflect those waterfront properties' elevated values. So in 2011, the town attempted to remedy the imbalance by reappraising every home in Colchester.

In doing so, Colchester reappraised leased-land properties based on the usual factors that influence the value of all homes, such as their age, square footage, number of bedrooms, bathrooms, porches, decks and so forth. But the town assessor, in the interest of full disclosure — and owing to a quirk in the appraisal software he used — listed separately the "land/amenity" value, or monetary worth of other factors that influence the home's fair market value, such as its vistas and proximity to the lake.

Leased-land homeowners quickly realized they were being taxed not only on the value of the physical structures, which they own, but also on other factors belonging to the land, which they don't — including their walking distance to the beach and their views of the Adirondacks.

"People just went crazy," recalls Colchester Town Clerk and Treasurer Karen Richard. "They said, 'I don't own the land! I just own the building and just want to be assessed for that.' But you're supposed to look at the bottom line: How much can you sell it for?"

For its part, the town essentially argued that the three most important factors in determining real estate values — location, location and location — also apply to leased-land homes. The town contended that it's impossible to separate the fair market value of a house from where it's built. In effect, Judge Crawford had to decide whether the value of a left-hand glove could be determined independently from that of its right-hand counterpart.

In his April 3, 2012, ruling, Crawford did just that. He sided with the homeowners, writing that "the only 'real estate' taxable to appellants [homeowners] are the 'buildings' they own." The intangible "amenity value" in these cases belonged to the landowner, who should be taxed accordingly.

Crawford's ruling could have had serious financial repercussions not only for Colchester but for other towns with large numbers of leased-land properties. Colchester stood to lose more than $36,000 in municipal tax revenues and more than $92,000 in school tax revenues in one year alone. Those figures didn't include back taxes from previous years that the town might have been forced to return to homeowners.

However, the town appealed Crawford's ruling to the Vermont Supreme Court — and won. In a July 2013 decision, Justice Marilyn Skoglund reversed the lower court's ruling and ruled that location-related factors are "intimately intertwined" with the value of the building. "Indeed," Skoglund wrote in her opinion, "it is hard to imagine any factor more closely tied to the value of a building than its location."

Murphy says he was disappointed but not surprised by the high court's ruling. Until a few years ago, he himself owned a camp on leased land in Milton, and says that such properties come with inherent risks and complications.

For example, Murphy's lease, which had a five-year initial term with another five-year option, only guaranteed him 10 years on the property. That's how the family who owned the land had been doing things since the 1930s, he says, with its leases written in anything but standard legal language. Yet despite his reservations, Murphy admits, "As a lawyer, I just closed my eyes and jumped."

What are the other drawbacks to owning a house on leased land? As Murphy points out, banks can be reluctant to lend money for leased-land homes, especially when the terms of the lease are short. Amortizing a mortgage over 30 years is hard enough for many Vermonters, he notes; amortizing one over 10 years can be financially impractical.

Another concern is that the zoning of leased-land camps is often such that the land can never be subdivided into ownership lots, nor can it be lived in year-round. Both are the case on Coates Island, a 70-acre island in Malletts Bay. David Coates, whose family has owned the island since 1872, has 36 seasonal leases and four year-round residences, the latter of which are all held by Coates family members.

As Coates explains, all the leases on Coates Island are for five years and cost $6,000 annually. That price doesn't include other fees associated with living on the island, including road maintenance, sanitation and membership dues in the Coates Island Campers' Association. Each lease also spells out how the land can be used. For example, lessees cannot cut down trees or erect other structures without first obtaining permission from the landowner.

How do people deal with buying a house on land they don't own, especially when they're responsible for land-related expenses, such as the upkeep and replacement of septic tanks and the environmental liability of replacing and remediating leaky underground fuel tanks?

"It takes people a while to accept that," Coates says. "Even though, when they go up for sale, they don't have any trouble selling them."

Coates also points out that lessees who don't abide by the rules can be evicted. How does one go about evicting both a person and his or her house?

As Coates tells lessees, "You can tear the house down and take it with you, or just leave it," he says. That said, evictions have been exceedingly rare on Coates Island — only two in 142 years, he says.

What are the rewards of living on leased land? 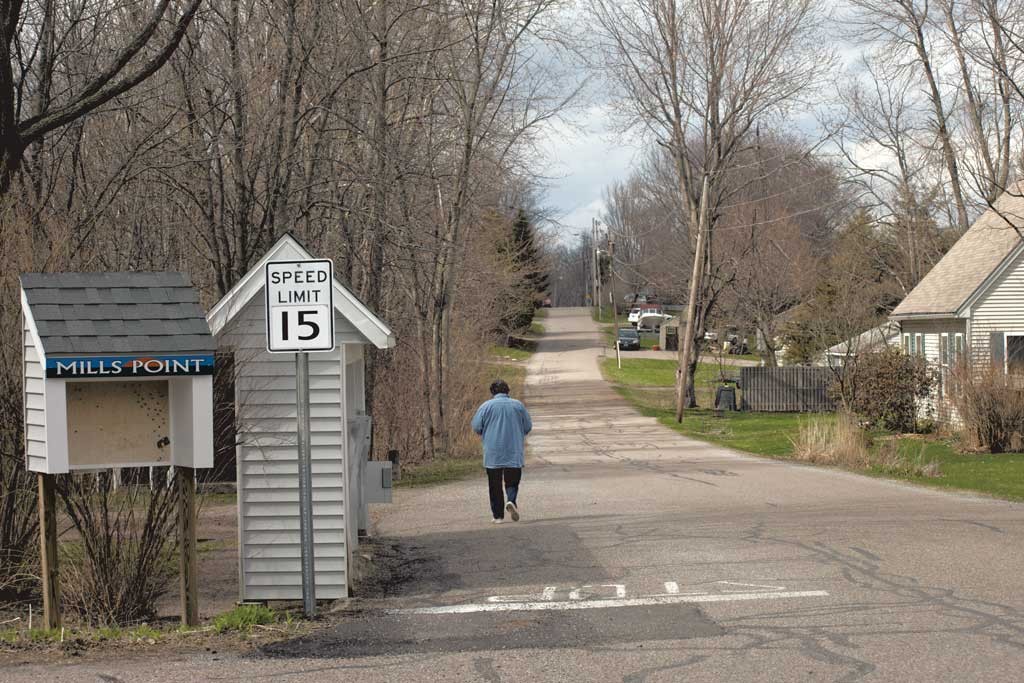 The most obvious are the characteristics that make these properties so desirable — namely, their scenic locales. Leased land in Colchester is primarily on Coates Island, Mills Point and Colchester Point, all of which offer phenomenal views and easy lake access for boating, swimming and fishing. Moreover, because homeowners purchase the house but not the land itself, the properties are sometimes more affordable than buying the lot outright.

And, as Colchester Town Assessor Vickery points out, neither the 2011 floods nor the recent Supreme Court ruling seems to have had a negative impact on leased-land market prices. In fact, he says, some of the homes irreparably damaged in 2011 sold for as much as $120,000, only to be bulldozed and replaced with larger and more flood-resistant structures.

Evidently, homeowners can still profit from their location — even when they don't own it.

The original print version of this article was headlined "Ungrounded"