Asleep at the Deal: Democrats Dodge a Veto Fight 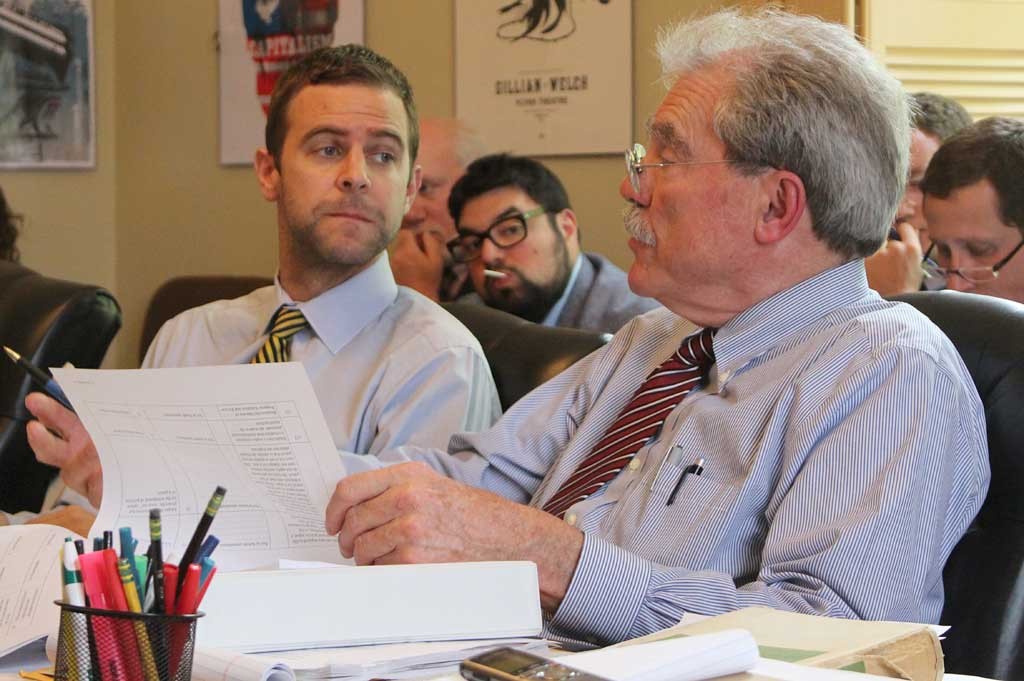 With a day remaining before their self-imposed adjournment deadline, legislators were scrambling to sign off on final budget, tax and health care bills. But they remained at loggerheads with Gov. Peter Shumlin, who'd spent weeks bashing their budget as too big and their tax plan too burdensome.

As day turned into night, legislative leaders grew increasingly frustrated with Shumlin's lack of engagement. So they decided to go it alone and send him a package of bills he had all but promised to veto.

At 10:30 p.m., four of the six legislators charged with negotiating a tax compromise gathered in the Senate Finance Committee's first floor Statehouse meeting room. Surrounded by lobbyists, reporters and administration officials, they ran through a $30 million plan that still largely relied upon capping income tax deductions for the wealthiest Vermonters — a proposal Shumlin bitterly opposed.

Forty-five minutes later, conference committee members took a break to allow legislative staff to clarify language in the bill. They agreed to return later that night to formally sign it. In the hallway outside the committee room, House Speaker Shap Smith (D-Morristown) took a few questions from reporters before heading home for the night.

Asked if he expected Shumlin to veto the bill, the speaker sounded a dourer note than usual.

"You know, I'm eternally optimistic, but perhaps it is unwarranted in this instance," he said.

Smith's Ways and Means Committee chair, Rep. Janet Ancel (D-Calais), struck a similar chord when asked if she thought Shumlin would give in and sign it.

Shumlin never had to make that call.

Before staffers finished scrubbing the bill, MacDonald announced he was taking off for the night. That posed a problem. Conference committees include three members from each body. In order to reach agreement, at least two House conferees and two Senate conferees must sign on the dotted line. Then the final version heads back to the House and the Senate for up-or-down votes.

Without MacDonald, only Ancel, Rep. Jim Condon (D-Colchester) and Sen. Tim Ashe (D/P-Chittenden) remained — too few to sign the bill. It would have to wait until morning.

So why did MacDonald leave?

Everybody just needed "a good night's sleep," he said.

Turns out MacDonald was right.

On Saturday morning, Shumlin's staff reached out to top legislators and said he'd like to talk. The governor was willing to accept the income tax deduction caps after all, so long as the legislature agreed to make further cuts to its ever-dwindling health care bill.

"In truth, by taking that pause we were able to make some adjustments to the language," Ashe said. "But it also gave people time to make their best judgments Saturday, rather than being tired and hasty in putting our signatures to the page."

Throughout Saturday morning, Smith, Senate President Pro Tem John Campbell (D-Windsor) and their conferees worked with the administration to figure out which revenue sources would lead them to the magic number.

Complicating matters was the fact that budget negotiators had signed off on their final bill late Friday night, so there was little wiggle room on the spending side of the equation. Only the health care bill remained open to discussion.

The chairs of the two health care committees — Sen. Claire Ayer (D-Addison) and Rep. Bill Lippert (D-Hinesburg) — had worked late into the night Friday assuming they'd end up with roughly $7 million to spend on their priorities. But Shumlin wasn't interested in giving them the money. Ever since the legislature had rejected his plan to create a $90 million payroll tax to finance his health care reforms, he had pooh-poohed the legislature's alternatives.

By midday Saturday, the only revenue source legislators and the governor agreed could go to the health care bill was a tax hike on cigarettes and other tobacco products. That raised just $3.3 million.

"I came in today, and suddenly it was no longer [$7 million]," he said Saturday afternoon.

Ayer, who described the $3.3 million as "a pittance," was livid.

"It's really kind of pathetic," she said.

At 1:30 p.m., Shumlin, Smith and Campbell emerged from the governor's ceremonial Statehouse office in shirtsleeves, with smiles on their faces. The governor looked triumphant, as if he'd just rolled his Democratic adversaries.

"I'm really pleased to announce that we have reached an agreement on the budget," Shumlin told a crowd of reporters camped outside his door.

"Everyone's given a little," the governor said. "I think it's an incredibly sensible plan."

Exactly who gave what wasn't clear for another hour. The three men refused to divulge its contents, saying they wanted to inform other legislators first.

Soon enough, it became apparent that the tax plan Shumlin had been prepared to veto the night before had barely changed at all. It still relied largely on raising income taxes on the wealthiest. Instead of capping deductions at two times the standard deduction, or $25,200 for a couple filing jointly, it would cap them at 2.5 times, or $31,500.

So why did Shumlin blink?

The governor himself claims he didn't. In interviews with several news organizations, he downplayed the standoff with his fellow Democrats.

"I've watched a lot of ends of legislatures," he told Seven Days later Saturday. "This one was no different than any. Both sides in the end come together to do what's right for Vermont."

But according to several legislators and an administration official, Shumlin was, in fact, seriously considering a veto.

"One of the challenges is, you veto a budget presented by members of your own party, but what do you replace it with?" said one participant in the negotiations who declined to be named.

"We'd all look like amateurs," said another top Dem.

Indeed, with Republicans controlling slightly more than a third of the House, the GOP could keep even a unified Democratic caucus from overriding a gubernatorial veto. Days earlier, House Minority Leader Don Turner (R-Milton) had gleefully announced he would come to Shumlin's aid.

In the event of a veto, legislators would have had to return to Montpelier next month for a surely unsuccessful override vote. They would then have had to work with the governor to hammer out new budget and tax bills, replicating a process that had already proved painful enough.

After a good night's sleep, Democrats finally realized how crazy that would be.

At 3:45 p.m. Saturday, conference committee members reassembled in Senate Finance to sign off on a tax bill that would be approved by the House and Senate later that night.

"It's been fun," Ancel said sarcastically.

Asked last Wednesday when the Senate Rules Committee might find time to address the matter, Sen. Campbell answered somewhat elliptically, "Whenever we finally have time."

It's not exactly a new idea.

The political advocacy group Campaign for Vermont first called for the panel's creation in January 2014, noting that Vermont was one of the last states without one. The Senate took testimony on the matter that year, but declined to act. When the House voted to establish an ethics panel in April 2014, Campbell told Seven Days his chamber would not follow suit.

"I can't remember the last time there was something that even came close to a question of someone's ethics," Campbell reiterated in February 2015.

Three weeks ago, the gov ops committee finally voted to establish a panel. The next day, Seven Days reported that Campbell himself lobbied for the creation of a deputy state's attorney job in May 2014 — and was hired for the job weeks later.

After the story's publication, Campbell claimed he had "always" backed the establishment of an ethics panel.

Last week, Campbell told VTDigger.org's Anne Galloway he would welcome an ethics panel, so that senators could "clear their name" against allegations made by "journalists or bloggers."

Of course, the proposal never came up for a formal vote in the Rules Committee, which is dominated by Campbell and his allies. According to several of its members, the committee briefly discussed it and decided to punt until after the legislature adjourned.

Meetings of the Rules Committee aren't publicly announced. Seven Days repeatedly requested to be notified when the committee addressed the issue but was rebuffed.

Sen. Phil Baruth (D-Chittenden), who serves on the committee, advised Seven Days not to take it personally.

"If it's any consolation, they recently held a meeting without me," he said.

"It clearly wasn't a priority of Sen. Campbell's," Patten said. "I find it concerning that one of the senators that has been the focus of so much concern with regard to his own ethics got to decide whether or not this moved forward."

In a new complaint addressed to Vermont's 14 state's attorneys, Toensing added two new charges to the four he filed against Sorrell last month.

According to Toensing, the AG "ignored his ethical obligations and refused" to investigate 2012 allegations that a political action committee had failed to register in Vermont in order to skirt state spending restrictions and support Sorrell's own campaign.

He further alleged that Sorrell accepted legal representation in that matter from an attorney who was concurrently representing clients before Sorrell's own office. Toensing called the situation "an indisputable conflict of interest."

After Toensing, the vice chair of the Vermont Republican Party, made his initial allegations last month, the Senate Committee on Government Operations called on Gov. Shumlin to appoint an independent counsel to investigate them. Two weeks ago, Shumlin named Shelburne attorney and former state representative Tom Little to work with the state's attorneys to investigate the matter.

Sorrell, who has not responded to Seven Days' requests for comment in a month, did not break his streak late Tuesday.

For more on this developing story, read our post on Seven Days' news and politics blog, Off Message.