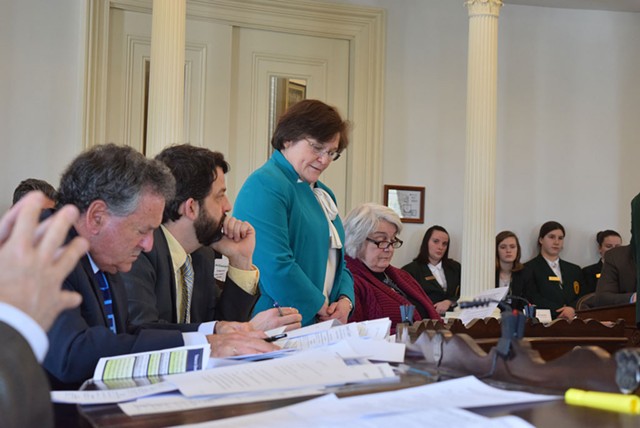 It was 44 degrees and threatening to rain last Friday as Sen. Peg Flory (R-Rutland) stood alone in a parking lot next to the Vermont Statehouse, drawing on a cigarette. Wearing a suit jacket and skirt but no coat, the veteran senator shrugged off the chill. A day earlier, when a steady rain fell, she took her smoke breaks with an umbrella.

Any cigarette smoker knows this scene. Exiled to a back parking lot in all kinds of weather, often joined by a diminishing number of brethren, he or she sticks to a habit that year by year makes the smoker an ever-greater pariah.

The days are long gone when legislators were permitted to smoke during debate in the House and Senate chambers, Flory noted.

The raspy-voiced 68-year-old lawyer knows that the cigarettes she's smoked for most of her life are bad for her health. Flory has tried to quit at least three times, but, every time, someone close to her — her law partner, her husband and a friend — died suddenly, and she resumed smoking. Now, she says, friends beg her not to quit for fear they'll be next.

"I cut back drastically," Flory said, lingering next to a pickup truck in the parking lot. She's down to less than half a pack a day, she said.

Despite her lifelong struggle, Flory opposes a Senate bill that would raise the smoking age from 18 to 21, as Hawaii and California have done. She is reluctant to limit the freedom of others, though she acknowledges that such a law might have prevented her from taking up the smoking habit at age 19.

Some bills that land on legislators' desks are abstract. They impact other people in unknown ways. But this one, S.88, is deeply personal for many members of the Vermont House and Senate.

In between puffs on a Marlboro during her post-lunch smoke break, Flory said that if 18-year-olds are trusted to join the military, get married or sign a legal contract, they should be able to make their own decisions about smoking. As she talked, she hedged. Maybe, she clarified, the smoking age should be raised to 19 — to reduce high schoolers' access to cigarettes.

For now, though, any action on raising Vermont's smoking age has stalled. Supporters thought they had the votes to pass S.88 in the Senate last month. But at the 11th hour, several senators changed their minds and supporters tabled the bill, which was expected to fly through the House.

"I'm hopeful," added Sen. Ginny Lyons (D-Chittenden), another sponsor. Her own father, she said, died of emphysema after years of smoking.

Like Lyons, Sen. Carolyn Branagan (R-Franklin) chose to sponsor the bill because of a searing family memory. Her brother, Carl Whitney, died at age 40 in 1995. He was 13 months her junior.

"He died in my arms of lung cancer," Branagan said, choking back tears as she spoke. "He left four children. Our family knows what this pain is."

"Our family knows what this pain is." Sen. Carolyn Branagan tweet this

But Branagan withdrew her support after asking her constituents for input. Her Facebook feed was flooded with posts from Franklin County residents urging her to refrain from further regulation.

"It's still a free country," Branagan said. "I ran [for office] with the understanding that I was going to stick with these people. They see this as another way government is intruding in their lives."

Branagan tried to explain her change of heart.

"It should be a personal decision based on education," she said.

On Friday, Flory smoked alone. But as she left, Sen. Robert Starr (D-Essex/Orleans) emerged to light his More cigarette. It's a bipartisan group of all ages that convenes in a parking lot made famous as the site of then-senator Norm McAllister's arrest in April 2015.

Degree has his own dilemma: Though he's a regular member of the back-lot smoking group, he was reluctant to discuss his habit for publication. He claimed that his grandfather doesn't know and would be disappointed.

The 32-year-old Degree wants to quit, he said, but "it's very hard." When he's driving — or when he has downtime at the Statehouse — the chemical addiction takes over, he said.

Like Flory, Degree estimates he started smoking regularly at age 19. A higher smoking age might have spared him, too.

Degree initially leaned toward supporting S.88, but he has the same constituents as Branagan — and has heard the same arguments. "A big part of me says we can't make people's decisions for them," he said.

But if the state legalizes marijuana, he added, the legal age for that should definitely be 21.

How does he reconcile those conflicting positions? "I don't know," he said. "It does bring up an interesting conversation."

Ingram, a first-year senator, said some senators' stances on this issue were hard for her to predict. Some who typically have progressive, government-can-help views on other social issues have gone libertarian, no-government-interference on this one, she noted.

"I was kind of surprised," she said.

Senate President Pro Tempore Tim Ashe (D/P-Chittenden) and Sen. Chris Pearson (P/D-Chittenden) were among the progressive-turned-libertarian legislators who signaled they would vote against the bill. They argue that 18-year-olds should be able to make their own decisions on tobacco.

On the Senate floor last month, a majority of members voted to banish the bill to the Senate Finance Committee — dooming it for the session — but the next day Sen. John Rodgers (D-Essex/Orleans) called for reconsideration. Lt. Gov. David Zuckerman then cast a tie-breaking vote to save the bill from exile. It was tabled — and sits on the Senate calendar awaiting renewed support.

American Heart Association lobbyist Tina Zuk said she and others are still working to win over votes. The American Cancer Society is planning an "action day" at the Statehouse on this Wednesday with cancer survivors telling their personal stories to keep up the lobbying pressure.

"We're giving it everything we have," Zuk said. "If you talk to almost any smoker they'll say, 'I wish I'd never started.'"

Is Flory among them? "Sure," the senator conceded.

According to a state-by-state poll released Tuesday by the nonpartisan research firm Morning Consult, Vermonters are feeling pretty good about some of their top leaders.

Sen. Bernie Sanders (I-Vt.) retained his standing as the most popular senator in the country — according to home-state voters. And the second most popular in the whole dang nation? That would be Vermont's senior senator, Patrick Leahy (D-Vt.).

Seventy-five percent of Vermont voters approve of Sanders' job performance, while just 21 percent disapprove, according to the Morning Consult survey of 282 people. The poll was conducted from January to March and had a margin of error of plus or minus 5.8 percent. Sanders' approval rating has dropped a few notches since a September 2016 Morning Consult survey in which he claimed 87 percent support.

Morning Consult also tested the popularity of governors — and Vermont's first-term Republican Phil Scott fared well. He was the fourth most popular governor in the country, viewed favorably by 68 percent of those surveyed — and unfavorably by only 16 percent. That blew away former Democratic governor Peter Shumlin's 53 percent approval rating and 40 percent disapproval rating last September.

Congress decided to give us a break from its splendid antics by taking two weeks off for Easter, starting this week. We asked your representatives what they planned to do during the hiatus.

Leahy is scuba diving with his wife, Marcelle, and family, according to spokesman David Carle.

"He and Marcelle are taking the opportunity of this rare break in the Senate's nonstop schedule to claim some hard-to-schedule family time by heading to warmer climes to delve into some scuba diving, a pastime that they love but don't often get to practice," Carle said.

That "nonstop schedule" includes at least 14 weeks of recess planned for 2017 alone, according to the Senate's official calendar.

Carle declined to identify the warmer clime the senator is enjoying but said Leahy wouldn't be slacking off completely. "Their getaway will be interrupted daily by continuing negotiations on the budget per his role as [Senate Appropriations Committee] vice chair," the spokesman said.

Sanders, too, is spending some rare time in Vermont for half of the two-week break. He held events in Milton, South Hero and Montpelier on Tuesday and is planning more stops later this week, according to spokesman Dan McLean.

Next week, Sanders is scheduled to set out across the country with Democratic National Committee chair Tom Perez to hit up voters in states that more fully embraced President Donald Trump. They're headed to Maine, Kentucky, Florida, Nebraska, Utah, Montana, Arizona and Nevada for a tour dubbed "Come Together and Fight Back."

The coming together part refers not just to voters but also to the speakers. Perez, who endorsed Hillary Clinton in the 2016 Democratic presidential primary, recently defeated Sanders' pick for DNC chair, Keith Ellison, a prominent Bernie backer in 2016.

"The purpose of their trip is to begin the process of creating a Democratic Party which is strong and active in all 50 states, and a party which focuses on the needs of working families," McLean says.

So who's paying for Sanders' cross-country road trip? In an email to his national fundraising list Tuesday, the senator wrote, "Please make a $27 contribution to my reelection campaign to help fund this national tour."

That's right: Money raised for Sanders' 2018 Vermont reelection campaign will be used to send him anywhere but Vermont.

Columnist John Walters was off this week.