On a steamy weekday morning in June, Lisa Stever and Cathy Clear were walking to the beach to cool off when a reporter stopped them to ask about the Burlington Surf Club, where both Williston women are members.

"No! Don't tell anyone about our secret spot!" joked Clear.

"It's not much of a secret anymore, but it's such a special place," Stever added. "You've got shade, you've got the beach, they provide picnic tables ... and the sunsets here are just spectacular." 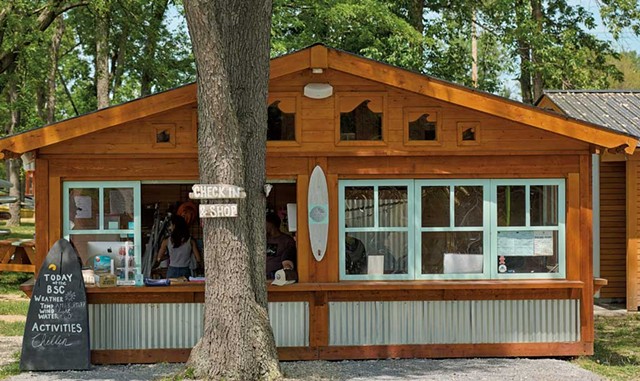 For years, people who walked and biked past the former Blodgett Oven factory in Burlington's Lakeside neighborhood looked longingly at its scenic private beach and tree-lined lawn, which were off-limits to all but company employees.

Burlington entrepreneur and lifelong surfer Russ Scully, who moved to the South End in 1997 with his wife, Roxanne, was among those who eyed the secluded spot whenever he rode by on the Burlington bike path.

"Every time my eyes gazed over that fence at the enormous campus and buildings, my adrenaline would hit the roof," Scully recalled in a recent blog post. "I'm not sure what excited me more, the repurposing of the buildings, or the thought of launching kites and windsurfers from that huge stretch of beach."

Then, about four years ago, Scully bought the 14-acre waterfront complex and converted its buildings into Hula, a 150,000-square-foot coworking space and tech innovation center. Completed in 2020, it's now home to about 100 companies.

But the Scullys, who also own the Spot and Spot on the Dock restaurants, as well as the WND&WVS surf shop on Pine Street, wanted the complex to include outdoor recreational opportunities. After all, where's the fun in working alongside Lake Champlain if you can't walk right outside your door at day's end and go play in the water?

Enter the Burlington Surf Club. Now in its fourth summer, the club offers annual memberships — $200 for singles, $300 for couples and $500 for families — as well as day-use passes for nonmembers, which cost $20 per adult, $30 per couple and $10 for ages 12 to 18. (Kids under 12 are free.) Access is readily available from the Burlington bike path or by car from Lakeside Avenue.

Visitors to the club can enjoy free amenities, including a sand volleyball court, picnic tables, lawn games such as Spikeball and cornhole, and barbecue pits; charcoal and lighter fluid are available if you forget to bring your own, noted club manager Sarah Krause. There's even a four-seat surrey bike for pedaling around the property.

But the main attraction of the Burlington Surf Club is Lake Champlain — specifically, getting on the water and enjoying wind- and human-powered activities. To that end, members and nonmembers alike can rent standup paddleboards (aka SUPs), windsurfing gear and Hobie Cat catamarans. Watercrafts are rented by the hour, half day or full day. Club memberships provide a 25 to 30 percent discount on most rentals, Krause noted, and wet suits are available free of charge. There are changing rooms and restrooms on-site, and members can store their own canoes and kayaks in the club's barns.

The club also takes appointments for lessons in various water sports, including wing, foil and kitesurfing, aka kiteboarding. A foil is similar to a kiteboard but mostly rides above the water rather than carving through it. Winging is a relatively new sport that involves riding a board powered by a handheld inflatable wing, without the use of the nylon lines used in kitesurfing.

A central feature of the Burlington Surf Club is its open-air, post-and-beam pavilion, where classes are offered seven days a week in yoga, meditation and other forms of fitness, flexibility and mindfulness. They include Nia, or neuromuscular integrative action, which blends yoga, dance and martial arts. The Nia teachers are Roxanne Scully and Sabrina Gibson, the latter a black belt Nia instructor and owner of Burlington's South End Studio.

In keeping with the Burlington Surf Club's goal of promoting active outdoor lifestyles, Gibson and Roxanne Scully also run weeklong sessions of SHE (strong, healthy, empowered) Girls Camp, now in its sixth year. For three weeks in August, girls ages 9 to 12 bond with one another in a safe and noncompetitive environment and learn sports such as paddleboarding, windsurfing, yoga, sailing and Nia. Kids 9 to 16 also can be enrolled in half-day SUP and windsurfing camps, with sessions held throughout the summer.

With summerlike heat starting early this year, club manager Krause said the weekends have been getting busier, especially with the easing of statewide COVID-19 restrictions and the return of tourists to the Burlington area.

But even on a particularly sweltering weekday, things were chill enough at the pavilion that a man sat meditating in a lotus position, blissfully indifferent to the freight trains rumbling by.

Stever, who has a family membership with her husband, David, and their two teenage daughters, said she often drops by for a couple of hours during the week to paddle, read a book "or just have some quiet time" before picking up her daughters from school.

When the girls are on summer vacation, the family often goes to the club for sunset dinners.

"They bring their friends, and they paddle," Stever said. "It's just a little piece of magic."

The Burlington Surf Club is open daily, 8 a.m. to 9 p.m., through Labor Day, with shorter daytime hours through the end of September. Learn more at burlingtonsurfclub.com.