As Storms Intensify, Burlington Struggles to Manage the Flow 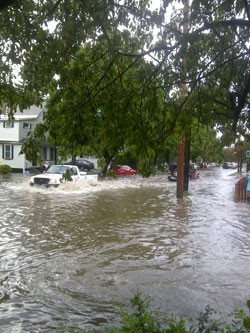 On May 22, a rainstorm dumped 1.4 inches of water on Burlington in just half an hour, clogging storm-water drains and turning some Queen City streets into scenes from Waterworld. Residents paddled down Green Street in kayaks and partied in puddles on Brookes Avenue.

But not everyone was celebrating.

The downpour caused aging pipes to back up, spilling sewage into basements in the Old North End. Downtown, water flowed through the basement walls of retail establishments including Sweet Lady Jane, Dear Lucy and Uncommon Grounds.

Those businesses, all housed in the same Church Street building, flooded after downpours last July and August, too. Property manager Marian Fritz says it’s become a frequent problem in Burlington. Just wander up and down Church Street after a big storm, she says, and “the next day you see everybody pumping out their basements.”

But Fritz says she’s never seen it this bad. More than two weeks after the storm, she says, water was still seeping through the building’s north foundation wall on the corner of Church and Cherry streets. To date, her company, Grandview Farms, has spent $3100 cleaning up the mess.

Such deluges used to be rare events, Fritz says, but now she and other property owners have come to expect them. “Every time it rains, now, we all just kind of hunker down and wait for the phones to start ringing,” she says.

The problem, in large part, is old infrastructure that’s not capable of handling storms that are becoming more frequent and more intense. Every time it rains, water flows through 2000 catch basins around the city into 100-year-old pipes made of brick. Burlington has more than 40 miles of storm and sewer pipes, but only 15 percent of them have been upgraded in the past century. When water volume is more than the pipes can handle — which is especially likely during storms in which rain falls fast and heavy — sewage and storm water can back up onto streets and into buildings.

Fritz says she gets that Burlington’s innards are old, and that public-works officials probably dread big storms as much as business owners do. But she says, “I’ve never gotten a sense that there’s a long-range plan.”

“We’re getting these yearly, really intense events — events that should not be happening yearly,” says Megan Moir, a storm-water “plangineer” in the Department of Public Works. Records show that Burlington had historically seen rainstorms like the May 22 downpour once every 25 years, but scientists are warning that climate change may already be making storms more powerful.

“The system isn’t necessarily designed for storms like this,” says Steve Goodkind, the outgoing director of the Burlington DPW.

“If this was a simple solution, it’d be done already,” says Roy.

A citywide overhaul of the sewer system is not likely, says Moir. Even smaller-scale replacements are hugely expensive; installing new pipes in parts of the Old North End and New North End in the 1980s cost $52 million, she notes.

But the city’s storm-water experts are chipping away at the problem. Moir and her staff are examining the catch basins at the intersection of Main Street and South Winooski Avenue, one problem spot, where water reached knee-high depths during the May 22 storm. They’re considering replacing catch basins there with “directional grates” that would better direct the flow of water. And they’re investigating whether the underground pipes could take on more water if the city added additional drains.

The city is also coating old pipes with a resin-impregnated felt liner that hardens into a protective layer. While that reduces the diameter of the pipes, it actually increases their hydraulic capacity by smoothing out rough edges and preventing blockages.

Pinpointing the exact source of a problem has been another challenge, Moir admits. One solution would be a new, computerized hydraulic model of the storm-water system that could identify the source of problems in real time and help city planners make improvements in the most crucial areas. But the system would be expensive — in the six-figure range, Roy estimates.

But some business owners are skeptical that these fixes will be enough. Steve Donahue is owner and president of property management company Donahue & Associates. His firm manages 131 Church Street, home to Ri Ra Irish Pub, the Whiskey Room and Von Bargen’s Jewelry. He says two big storms last July and August caused tens of thousands of dollars in damage. After May’s downpour caused more flooding, he had to hire contractors with dehumidifiers and wet vacuums to clean up.

“I’ve been with this building for 15 years,” Donahue says. “Everyone’s trying to claim that these events are the new normal. There’s got to be more to the story … There has to be something that’s impeding the drainage.”

One impediment, Moir points out, is a shortage of funds. In 2008, the city set up a storm water program within the Department of Public Works to pay for infrastructure upgrades. The city projected it could generate $1 million annually from user fees and grants but has collected just $762,000 a year. Since 2009, the city has collected a grand total of $2.6 million in user fees and $1.4 million in grants.

Moir notes that’s more than Burlington spent when storm-water management was comingled with DPW’s operating budget. But she says the city needs the full $1 million a year to keep up with maintenance. Most of the city’s catch basins, for instance, only get cleaned once every two years.

To make up for the shortfall in the storm-water program, Mayor Miro Weinberger’s proposed budget for fiscal year 2014 would raise the monthly storm-water fee for single family homes, duplexes and triplexes from $3 a month to $4.50 a month starting January 1.

Meanwhile, the fee the city charges for water use has also been going up year by year. According to Fritz’s records, the costs per 100 cubic feet of water for her commercial space on Church Street rose 57 percent over the past decade. Annoyed businesses owners like Donahue point out that they’ve already been shuttling what they feel is their fair share of fees to the city, only to run into problems when the system fails.

“We’re paying them to be able to handle our sewer and water, and they can’t handle it,” says Donahue. “The owner [of 131 Church St.] is pretty upset, because she’s writing checks to the city and she feels the city is not able to do what she’s paying them to do.”

Though Moir recognizes business owners are impatient, she cautions against moving too quickly to make big changes — particularly without understanding the overall hydraulic system. That could unintentionally cause problems elsewhere.

In fact, Fritz suspects a planned improvement to the system might explain the intensified flooding at her Church Street building. During the May 22 storm, workers were installing a Silva Cell — an underground reservoir that soaks up rainwater and nurtures urban trees — on Cherry Street. The open pit took on huge amounts of water. Fritz wonders whether the construction might have contributed to her flooded basement, though city planners still aren’t sure why her building took on so much water.

For now, city officials are urging patience and teamwork among the waterlogged downtown properties. Developing a plan for fixing an aging system — all while grappling with a changing climate — takes time, Moir warns. And there may not be a perfect fix.

“There is always going to be that event that we’re not going to be able to handle,” she warns.