As Russia Invades Ukraine, a Vermont Journalist Recalls His Time as a Moscow Correspondent in the 1980s | History | Seven Days | Vermont's Independent Voice

As Russia Invades Ukraine, a Vermont Journalist Recalls His Time as a Moscow Correspondent in the 1980s 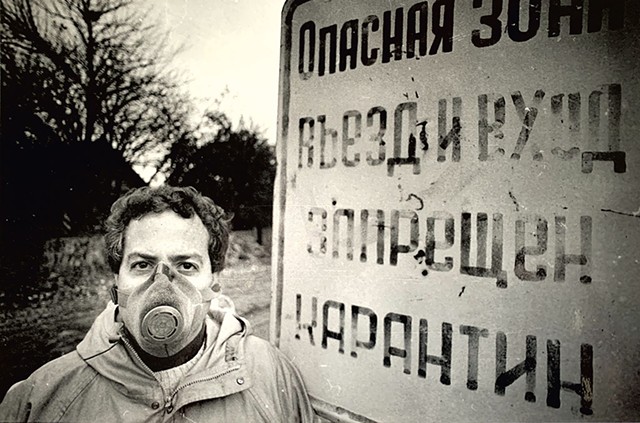 A few weeks ago, on the cusp of Russia's invasion of Ukraine, I heard a familiar name introduced on NPR and then a voice I hadn't heard in years. The voice belonged to the daughter of old friends from our years in Moscow, now working for a nongovernmental organization in Kyiv. In slight but resolute tones, she stated her intention to remain in the besieged city with her three cats. "Oh, shit," I muttered.

I was posted to Moscow by the Philadelphia Inquirer in August 1986, arriving with two daughters, ages 3.5 and nearly 2, and my wife, Margy, seven months pregnant. Our timing was not auspicious: Within days, an American correspondent was arrested on false charges and imprisoned by the KGB, which needed an asset to swap for a Russian spy unmasked at the United Nations. That was unsettling, but of far greater consequence to my family was a horrific event a few months earlier in Ukraine.

On April 26, a steam explosion and fire at the Chernobyl nuclear plant in Pripyat nearly caused a cataclysmic core meltdown. The accident unleashed a massive radioactive plume that rained invisible terror over hundreds, even thousands, of miles. As a safety precaution, the U.S. Embassy in Moscow took the unusual step of permitting journalists, businesspeople and other expat Americans to purchase from its commissary staples such as milk, butter and cheese.

No such niceties in Ukraine, however. In the days immediately following the disaster, the Soviet leadership, under the direction of relatively new general secretary Mikhail S. Gorbachev, kept from its own citizens what the rest of the world knew. In Ukraine and neighboring Belorussia, residents were treated as mushrooms: kept in the dark and fed bullshit.

In Moscow, we watched televised scenes of parades — parades! — in Kyiv, countryside scenes of spring planting and, everywhere, food being consumed. How could a child licking an ice cream cone seem so horrific?

(My most vivid memory of the disaster came months later and 1,200 miles away, as I entered a warehouse in rural Norway where thousands of reindeer carcasses had been stacked like plywood. Reindeer feed on lichen, which absorbs radiation like a sponge.)

This was my introduction to Ukraine. Chernobyl is perhaps the worst calamity to befall the country — until now.

The horror of that event and its cover-up enlivened the nascent independence movement in Ukraine, known as Rukh, and accelerated the push for independence. The struggle to rid themselves of Moscow's yoke was a major story. Other republics, notably the Baltic states of Estonia, Latvia and Lithuania, rallied and protested.

I traveled frequently to Ukraine, which actually had been the first to join the new Union of Soviet Socialist Republics 70 years earlier. In November 1989, the Berlin Wall came down and the Iron Curtain was no more. One of the most dramatic events in Ukraine occurred on January 21, 1990, when 300,000 citizens formed a human chain from Kyiv to Lviv, a chain that helped strangle the old USSR.

Ukraine is now the obsession of Vladimir Vladimirovich Putin, a former KGB counterespionage thug thrust into the Russian presidency by the decline of Boris Yeltsin, a once-charismatic leader whose alcoholism left the country shaken, not stirred. For 22 years, Russia has been ruled by a counterfeit Cossack who enjoys posing bare-chested on horseback and hunting both wild game and political opponents. The dissolution of the Soviet Union is the greatest tragedy of Putin's life, and he's made no secret of his desire to put Shaltay-Boltay — Humpty Dumpty — together again. He doesn't care what borders, rights, conventions or alliances he has to break to do it.

I truly doubt that Putin anticipated the fierce resistance his forces have encountered in Ukraine. tweet this

Black humor is endemic in Ukraine, so a favorite story has the Russian dictator approaching passport control at Kyiv's Boryspil International Airport.

Driving west from the airport to the city, a visitor sees from a distance a startling sight: the 335-foot-tall Motherland Monument looming over the Dnieper River. Arms raised, a sword in one hand and a shield in the other, she seems both a tribute and a warning.

I truly doubt that Putin anticipated the fierce resistance his forces have encountered in Ukraine or that the sanctions would come down so swiftly and effectively. Oil runs the economy — a noted Soviet-watcher once called Russia "a gas station with nukes" — and if the revenue stream dries up, the wheels of Putin's war machine grind to a halt.

Yet Putin will not back down; if he's out of gas, he still has nukes. Several historians have noted disturbing parallels with Adolf Hitler's Anschluss rationale in annexing Austria. In Putin's case, he's using pro-Russia separatist groups in the Donbass region to claim Russian interest.

I enjoyed traveling to Kyiv; it was a lively, beautiful city. Residents were tolerant of journalists who spoke Russian — not so in Lviv and the nationalist west. In Kyiv, I never failed to visit St. Sophia Cathedral, an 11th-century marvel of architecture and art and the first site in the country named to UNESCO's World Heritage List.

As with Ukrainian cities Kharkiv and Mariupol, in Kyiv Putin seems bent on destroying what he can't immediately conquer. And like a torturer probing a prisoner's wound, Putin controls Chernobyl. One hundred technicians are working under armed guard to maintain the defunct nuclear plant, after Russian forces seized the compound in the first hours of the invasion.

In late 1989, I returned to the so-called "Dead Zone" around Chernobyl. Pripyat could have served as the model postapocalyptic town: shutters banging against the weathered façades of houses, weeds grown to five feet, cars abandoned in the middle of streets.

A few months before me, Gorbachev made his first visit to the area. A nuclear research group had revealed that 1,800 villages in Ukraine, Belorussia and the Russian Republic were considered contaminated or dirty. Alternately confused and suspicious — and despite rising incidence of nosebleeds, thyroid problems and cancer clusters — many Ukrainians stayed and lived as they always had and consumed what they grew. One village woman looked at me and shrugged. "The milk was white," she said, "and it is still white."

Many of those images returned to me as Anschluss 2022 began, and I was wishing that Ukraine had the firepower to bomb into oblivion that 40-mile-long Russian convoy approaching Kyiv. Not knowing was hell, so a few days after hearing that familiar voice on NPR, I tracked down the older sister of the young woman in Kyiv. She assured me that her sibling was safe after a tense multiday car ride to Romania.

I heard from another Moscow colleague, the widow of a Danish diplomat. He had served as Denmark's ambassador to Ukraine after leaving Moscow. "He once met with Putin and said he had reptilian eyes," she told me. "He found Putin surprisingly ill-informed, especially on NATO." My friend said she'd been contacted recently by someone she knew in Kyiv, now stranded with her frail, 82-year-old mother. "When I contacted her, she asked if they could stay with me in Copenhagen. Of course, I said yes."

In his poem "The Caucasus," Taras Shevchenko, the revered 19th-century literary giant and ardent Ukrainian nationalist, wrote this: "Keep fighting — you are sure to win! God helps you in your fight!" Last week, President Joe Biden referred to Putin as a "war criminal," a characterization the Kremlin huffed was "unforgivable." An unwittingly perfect summation of the destruction of a country and the terrorizing of its people.

Contributing writer Steve Goldstein was Moscow bureau chief for the Philadelphia Inquirer from 1986 until 1990.

The original print version of this article was headlined "Evil, in Search of Empire"