As Recreational Cannabis Sales Loom, Doctors Worry About Teen Use 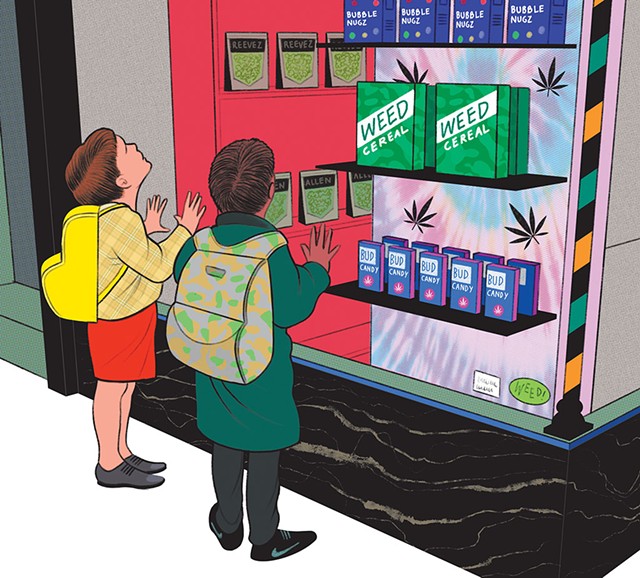 Every two years, thousands of Vermont teenagers are asked a series of questions about whether they are drinking alcohol, having sex, using drugs or engaging in other risky behaviors. In the most recent installment of the state survey, fewer teens reported drinking or cigarette smoking. On the rise, though, was cannabis use.

The 2019 Vermont Youth Risk Behavior Survey found that the number of high school students who reported using pot in the last 30 days had ticked up to 27 percent from 24 percent in 2017.

Experts say they aren't surprised — but they are worried that even more teenagers will become users when the retail sale of marijuana becomes legal in Vermont next year. That's bad news, they add, because of the drug's effect on developing brains and the risk teenagers run of becoming dependent on it.

"For a lot of people, the idea that cannabis makes you mellow and happy and passive is a myth," said University of Vermont Medical Center child psychiatrist Dr. David Rettew.

The recent increase in teen marijuana use occurred as Vermont legalized adult possession and use in 2018. Though the drug remains illegal for those under 21, research shows that teens' perception of its risks tends to decline and their use can increase in states where it has become legal for adults, according to Mariah Flynn Sanderson, director of the Burlington Partnership for a Healthy Community, a coalition that educates about substance-abuse issues and advocates for policy change.

"We know that legal substances are usually seen as safer, and they're more accessible. It's much easier to go to your corner store and buy something than it is to find a drug dealer," Sanderson said.

Even before legalization, she said, social conventions and marketing were leading young people to perceive marijuana as safe and healthy, despite data that paint a different picture.

"[Marijuana] is playing a role in a troubling percentage of the patients that I see. And it's often accompanied by close to a complete lack of awareness that cannabis could be part of the problem, rather than part of the solution," said Rettew, who is also medical director of the Child, Adolescent and Family Division of the Vermont Department of Mental Health.

Rettew treats young people suffering from attention deficit hyperactivity disorder, depression and anxiety. He's seen teen cannabis users showing up in the emergency room and needing hospitalization for aggression and out-of-control behavior. His young patients often tell him they use marijuana to control their anxious feelings. The drug may help them in the short term, but when their high wears off, they feel worse than they did before using, he said.

"I have a pretty low tolerance for saying 'no big deal' about youth cannabis use." Dr. David Rettew  tweet this

This creates a pernicious cycle, he said, in which teens must use cannabis regularly or risk withdrawal symptoms such as irritability and depression.

"I have a pretty low tolerance for saying 'no big deal' about youth cannabis use because of what we know about how cannabis affects developing brains," Rettew said.

Dr. Nora Volkow, director of the National Institute on Drug Abuse and a senior author of the study, attributed the finding to the plasticity of the developing brain.

"It's a learning process when you become addicted. It's a type of memory that gets hardwired into your brain. That occurs much faster in an adolescent brain," Volkow told the New York Times last month.

Burlington pediatrician Dr. Jill Rinehart shares many of Rettew's concerns. Most distressingly, she said, she has seen a few teens who are chronic users experience episodes of psychosis — irrational and disoriented thoughts — and early onset schizophrenia. More often, marijuana use leads to a lack of drive or motivation, she said.

"Suddenly, that 10th-grade girl who wants to be a neuroscientist is hoping that she will maybe graduate," she said.

As youth anxiety and depression spiked during the pandemic, Rinehart also saw an increase in marijuana use among teenagers who already used it pre-pandemic. "Kids think smoking cigarettes is disgusting, but weed is perceived as OK," she said.

"I think what I'm asking is that we be very respectful of this complicated plant that has over 300 components to it [that] are not benign in any sense of the word," she said.

It's not just the cannabis itself but the method teens are using to consume it that troubles those in the medical community. The 2019 risk behavior survey found that vaping as the primary method of use increased from 2 to 17 percent during the two-year period. That's worrisome, because new research from the University of Michigan indicates that adolescents who vape cannabis are at greater risk for respiratory symptoms such as wheezing than are teens who smoke cigarettes or marijuana, or vape nicotine.

UVM Medical Center pediatric pulmonologist Dr. Lauren Faricy said that smoking and vaping cannabis is "just really normalized" among the young people she treats. "I think in Vermont, in particular, people see it as kind of this natural thing: 'It's a plant, and therefore it's not harmful.'"

But that's not the case, she said.

"There's a real assumption that vaping is safer or cleaner for teens," she said. "[But] your lungs are not meant to have irritants and chemicals inhaled on a regular basis, over and over ... Oils are incredibly inflammatory in the lungs."

Some of those assumptions come from the way vaping has been marketed as a safer alternative to cigarettes, said Faricy. Rettew said the cannabis industry promotes the message that marijuana is natural and not addictive, and it "cherry-picks the science" to promote its health benefits.

"One of the techniques of the industry that I find particularly deceitful and irritating is this kind of bait-and-switch that will happen," Rettew said. "There might be a study out there that shows some medical benefit from some pure extract from cannabis like cannabidiol [CBD] ... Then that study over social media ... gets used to support people smoking some 80 percent THC product with a name like Monkey Head Explosion. I just find that very, very deceitful."

Sanderson, of the Partnership for a Healthy Community, said she regretted that she and others who work in prevention hadn't been able to persuade the state to spend more on educating teens and parents about the drug's risks in the years leading up to legalization. There are challenges to doing youth prevention work now that marijuana is legal, Sanderson said.

But with legalization a fact of life, Sanderson and her peers must face that challenge. Simply trying to scare teens into abstaining isn't effective, she said: "The focus is really going to be more on, 'How do you live life in such a way that helps you accomplish the things you want for yourself?'"

Because 90 percent of those who develop a substance-use disorder started using drugs or alcohol before age 18, Sanderson said, "our goal as a community should be how we can delay use as long as possible so that those brains can fully develop."

The retail cannabis law specifies that 30 percent of a 14 percent excise tax on recreational marijuana will be directed at substance-abuse prevention. Sanderson hopes the revenue will be used to support a variety of strategies tailored to different areas of the state, with the aim of supporting healthy decisions at the individual, community and policy level.

At the doctor-patient level, Rinehart said, one of her go-to prevention strategies is to help teens understand that "it's in the best interest of the [cannabis] industry to create new users, and so they're going to be as creative as they can" to market their products to young people.

"I don't think kids want to be taken advantage of ... They want to be seen as smart and good decision makers," said Rinehart. "When we give them good information, I think they can make good decisions. But it's a really skewed place that we're in right now."

Some Vermont teens are educating themselves. For three years, Winooski eighth grader Netalya Hill has been a member of Above the Influence, a school-based youth program that supports healthy choices and living substance-free. Participants discuss ways to cope with problems using strategies other than taking drugs or drinking alcohol. They also look at how some tobacco and drug companies pitch their products to young people.

"Drugs and alcohol, they can really damage a person," she said. "There are a lot of people that purchase these things, and they're not as educated on what they are and what they can do to a person."

The original print version of this article was headlined "A Troubling Trend | As recreational marijuana sales loom, doctors worry about teen use"