In 2009, Yam Mishra left a Bhutanese refugee camp and landed in Arizona. Eighteen months later, he and his family moved to Vermont to be with his in-laws.

He put down roots, working as a program manager at the Burlington nonprofit Howard Center and buying a home with help from the Champlain Housing Trust. But after seven years in the Green Mountain State, Mishra and his family decamped for Columbus, Ohio, in 2018. He cited an ever-narrowing group of acquaintances in Vermont and a widening circle there: 10 to 15 Bhutanese families that also left the Burlington area for central Ohio, including his in-laws and extended family.

"In the long run, I thought my family ... in Vermont would be kind of a small group," Mishra told Seven Days in a telephone interview.

An academic study released last year titled In Search of Opportunity and Community: The Secondary Migration of Refugees in the United States found that immigrants to the U.S. who move a second time seldom head to Vermont. Instead, refugees and immigrants who initially resettle in the Burlington area sometimes depart for greener pastures.

President Donald Trump's decision to drastically cut the number of new arrivals to the state has exacerbated the situation. Only 115 refugees are expected to arrive in Vermont in 2020 — compared to an average of 336 annually between 2008 and 2016.

Politicians and business leaders are working on measures they hope will make Vermont a more appealing place to live.

That's essential for employers, many of whom say "they'd be in dire straits if it weren't for this subset of the workforce," said Vermont Senate President Pro Tempore Tim Ashe (D/P-Chittenden).

Bhuwan Sharma, a Nepali immigrant, and Chandra Pokhrel, a Bhutanese refugee, opened the Burlington Employment Agency in the city's Old North End in 2016. It specializes in cultivating a workforce of immigrants and refugees to take temporary jobs in light manufacturing, hotel housekeeping and food production.

After an encouraging start, their business has stalled despite employee-hungry companies in a state with record-low unemployment.

"You would expect it to grow steadily, but it has kind of plateaued," Sharma said.

He blames the Trump cuts to refugee admissions in part, but there's another factor at play. Expensive housing has pushed dozens of Bhutanese refugees from Burlington and Winooski to other states, he and Pokhrel said. In Columbus, Ohio, home to the largest community of Bhutanese in the U.S., the median home value is $168,000, compared to Burlington's $329,000, according to Zillow.

"When it's time to buy a house, they look at the cost and they say, 'Maybe I'm making the same amount of money as here, but I can buy a home for so much less,'" Sharma said.

There are also abundant warehouse jobs and opportunities to connect to people with similar backgrounds in Columbus, said Sudarshan Pyakurel, director of the nonprofit Bhutanese Community of Central Ohio. He said he's recently seen an influx of new arrivals from New England.

"They say, 'maybe I'm making the same amount of money as here, but I can buy a home for so much less.'"Bhuwan Sharma tweet this

It's not just Bhutanese who are leaving Vermont. Housing costs are also a concern among Congolese, Burundian and other New American groups, according to Irene Webster, a caseworker for Swahili-speaking refugees at the Burlington-based Association of Africans Living in Vermont. She knows of several families considering moves and two Congolese families that recently relocated to Manchester, N.H., primarily for lower rent.

"It was too expensive to live in Vermont,'' Webster said.

While affordable housing has long proved an intractable problem in the state, especially in Chittenden County, legislators have passed measures intended to improve conditions for New American workers.

Act 80, a tripartisan measure that Republican Gov. Phil Scott signed last July, urges the state Department of Labor and the Community College of Vermont to collaborate on short-term training to help New Americans show they have basic skills in English, math and computers. After completion, they would receive "work-readiness" certificates that might boost their chances for better jobs.

The law also urges the labor department to remind employers about existing federal funding they can tap to offer English classes on-site.

Lawmakers want Vermont to also consider a marketing campaign to lure New Americans from other states. It would be a welcome message to tout, as the law states, "Vermont's inclusive workplace practices and employment opportunities."

Leaders hope another incentive will appeal to New Americans living in other states. Beginning this month, anyone who moves to Vermont to work for a local company and meets certain criteria is eligible for up to $7,500 in moving and work-related expenses.

The law also urges the state to publicize the immigrant-friendly hiring practices of local businesses such as Twincraft Skincare, which makes soap in Winooski and Essex. Forty percent of the company's production employees — 64 of 160 workers — are New Americans. Twincraft pays employees to attend on-site English classes for four hours a week over the course of 18 weeks. Employees can pray in a break room and are given a floating holiday for religious observances.

The company also offers unpaid leaves of absence for those who want to visit their home countries. A United Way of Northwest Vermont employee comes to Twincraft weekly to help employees with questions about housing, transportation and assistance programs for paying utility bills.

Starting wages are $14 an hour. So far, Twincraft has been able to recruit employees mostly as needed, said Elizabeth Perrin, a company human resources exec. But the enterprise, with 210 employees total, wants to grow, and New American workers are an important component.

First, Twincraft has to stop losing employees: Some 15 to 25 of its New American workers have left Vermont over the past five years, and many of them were drawn to the Midwest by lower costs of living. 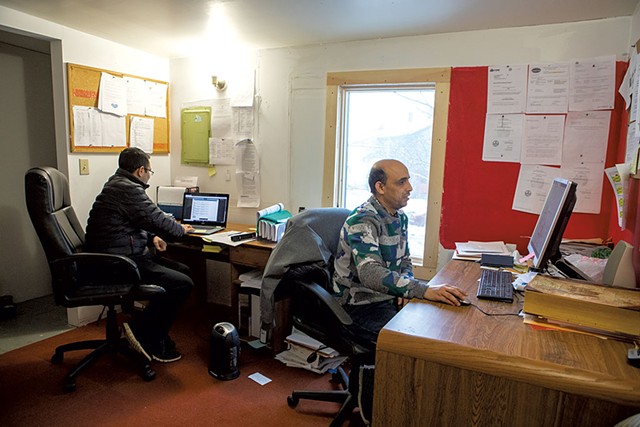 Company leaders strongly support the U.S. Refugee Resettlement Program and have urged state leaders to oppose the federal reductions. "As a business that is continuing to grow, it will hurt us," Perrin said.

The Vermont office of the U.S. Committee for Refugees and Immigrants has contracted as fewer New Americans arrive. While it employed 19 full-time workers in 2017, the office today has 11 full-time and two part-time workers. A field office in Rutland was shuttered after only three Syrian families were allowed to settle there.

The "greatest tragedy," director Amila Merdzanovic said, is that "families will remain separated.

"People facing real threats will unfortunately not be afforded a chance for safety and for [a] new life in the United States," she said.

A Trump executive order signed last September requires that states and other localities consent to accepting more refugees. Last Friday, Texas Gov. Greg Abbott was the first to say no to new resettlement.

But Vermont's Gov. Scott has long broken with Trump on issues like this, and he joined some 40 other governors in saying yes.

"Vermont's refugee communities have made countless contributions to our state," Scott wrote in a letter to the feds. He urged them to restore placements in Vermont to 325 to 350 a year and emphasized refugees' potential to help ease the state's shortage of workers.

"As Governor I have made it my top priority to grow our workforce and attract more workers to our state," Scott wrote. "The Refugee Resettlement Program is one tool in our toolbox when it comes to meeting this goal; to the extent other states may not consent to resettle refugees, I hope refugees will consider Vermont a welcoming place that can meet their needs."

Pro Tem Ashe said that boosting the minimum wage, improving public transit and marketing Vermont as welcoming would help retain and expand the New American demographic in Vermont. The group has made important cultural contributions and "been absolutely vital over the last couple of decades" to the Vermont workforce, Ashe emphasized.

The legislature will seek progress reports on the initiatives passed last year, he said. Efforts to grow the New American workforce represent a small but important part of the state budget and should not be viewed as competing with the many labor programs directed at the broader Vermont population, he added.

"It's recognizing that, in some communities, New Americans are a growing percentage and that our employers are calling for us to do more to draw people here," Ashe said.

In the meantime, Sharma and Pokhrel are shifting their strategy at the Burlington Employment Agency. They have recruited some new arrivals from Democratic Republic of the Congo to the agency's roster and are reaching out more to nonimmigrants seeking work. "The idea is to deepen our reach among all these population groups," Sharma said.

Their own stories illustrate the path to success for New Americans in Vermont. Sharma, a former journalist, came to Burlington in 2011 under the Diversity Immigrant Visa Program. He worked multiple jobs and now owns a house in Colchester and his own business.

Pokhrel came to Vermont from a Nepali refugee camp in 2009. He and his wife both worked several jobs and now own five properties, including their home in Essex and the Intervale Avenue building where the Burlington Employment Agency is located.