As Many Schools Cut Arts Programs, BFA-St. Albans Doubles Down 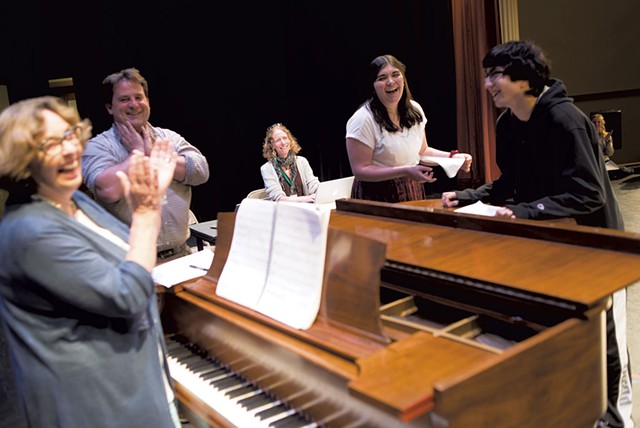 Just hours before the curtain rose in the Performing Arts Center at Bellows Free Academy St. Albans, Rosie Bibona eyed the stage from a control booth high above the auditorium. She was directing the Junior Jam, a series of one-act plays performed by her fellow high school students, and the graduating senior was in full multitasking mode: She followed the actors' lines, scribbled notes on a script, cued the lighting and sound engineers, and fielded questions from this reporter.

"This is our last dress rehearsal before our show tonight, and we haven't had a dress rehearsal with all of our cast yet," Bibona blurted quickly, her eyes darting between script and stage.

"Yeah, I'll tell you when to go," Bibona whispered.

The students had been rehearsing since late March, which gave them less than two months to pull it together. "So, it's kind of stressful," Bibona admitted, laughing nervously. But despite the opening-night jitters in her voice, she seemed energized by the pressure.

Meanwhile, onstage below, Hamlet's Ophelia was "getting her pharmacological adjustment." As Bibona explained, the play, The Hamlet Thrill-ma-geddon, by playwright Don Zolidis, is a comedic twist on William Shakespeare's classic and tells the story of a school drama club whose budget gets cut. The thespians manage to save their production by accepting corporate sponsorships and inserting mid-play advertisements — in the scene underway, the ad is from a pharmaceutical company.

Palmer's theater program has little chance of getting the ax. In fact, as some public schools scale back their arts programming to balance their budgets, BFA St. Albans is doubling down.

And it's not only happening in the theater department. Kevin Dirth, superintendent of the Maple Run Unified School District, said that the district just hired a new, full-time music director for the 2018-19 school year. It's part of a broader effort by the newly consolidated district — created two years ago under Act 46 — to integrate arts education into the core curricula of reading, writing, math and science and "teach the whole child."

Full-time drama positions like Palmer's are rare in Vermont public schools. According to the state Agency of Education, there were just 19 theater teachers statewide in 2016-17, and many of them either work part time or have other school duties. So, when Palmer saw the job posting last year, she jumped at the opportunity.

"I literally had 10 employers last year," Palmer explained. The 42-year-old Colchester native, who has a master's degree in directing from Middlesex University in London, worked at Vermont Stage and the Flynn Center for the Performing Arts, and she spent eight years as an after-school drama teacher at Essex High School.

"I love theater," she said, "but it was getting really hard to make it my life."

"I feel like I've had so much support. So many teachers have been very willing to collaborate." Susan Palmer tweet this

Palmer's office is in the costume room, located backstage on the second floor of the Performing Arts Center, which underwent a $2.7 million renovation a few years ago. Interludes of "Don't Cry for Me, Argentina," from Evita, emanated from the stage below while she spoke.

Palmer started in October and had to hit the ground running. Fortunately, the fall musical was Godspell, which she'd produced twice previously. She immediately took over teaching the school's two drama classes — Acting 1 and Acting for the Camera. Then she got to work on an ambitious plan to incorporate theater education into other classes.

In one, Palmer worked with English teacher Mary Ellen Tourville to codesign an interdisciplinary unit for teaching the book Speak. The young-adult novel, by Laurie Halse Anderson, tells the story of a high school freshman who is ostracized by her peers and subsequently stops speaking, after inadvertently ruining their end-of-summer party.

Using the novel, Palmer taught the students to create their own "theatrical tableaus," or frozen video images, to represent figurative passages from the text. The students then made audio recordings of themselves reading that text. As Palmer explained, it was a theatrical approach to teaching concepts in literature — character development, subtext, inner monologue — that complemented Tourville's own lesson plan.

In another class, Palmer worked with Olga Saldarriaga, a Spanish-language teacher, to help students expand their español vocabulary. Palmer used a talk-show format in which students were asked to describe their personalities, in Spanish, as if they were being interviewed on television.

"At first [the students] were feeling like, 'This is weird! She's the drama teacher. What's she doing here?'" Saldarriaga recalled. However, after seeing the first group of their classmates perform, the students cheered like a real audience and gained confidence in their own Spanish abilities. Later, they told Saldarriaga that they really enjoyed the lesson, in part because it was a change from their normal classroom routine.

"The students loved it," she said. "And the good thing is, [Palmer] did not know a word of Spanish, but by the end she knew everything!"

"I feel like I've been wheedling my way into everyone's room," Palmer said.

Her drama lessons extend beyond school hours. Having taught improv for five years at the University of Vermont, she started an after-school improv group at BFA St. Albans, which now performs every six weeks at the Grind Café, a local coffeehouse. The group was so popular that Palmer is considering forming junior varsity and varsity teams; next year, she hopes to teach it as an elective.

One difference Palmer noticed between her current and previous teaching gigs was how many students arrive at BFA St. Albans without any theatrical experience. At Essex High School, many of her students had taken acting classes or performed in summer musicals. But at BFA, students often looked at Palmer blankly when she mentioned, say, method acting or Bread and Puppet Theater.

"You cannot be studying acting in Vermont," she said, "and not know about Bread and Puppet!"

So Palmer formed an after-school group called Theatre for Social Change. The group meets once a week to discuss how the dramatic arts can be used to address political and social issues of relevance to the students, such as gender, cliques and school violence. She invited a Bread and Puppet performer to talk to the group, and the students later attended one of their shows.

On another occasion, Palmer invited Charlotte-based Kathryn Blume to speak to the group about her work as a writer, environmental activist, solo performer and cofounder of the Lysistrata Project, a worldwide theatrical event for peace.

While Palmer acknowledged that she's accomplished much in her first year, she emphasized that it couldn't have happened without the school's longstanding commitment to the arts.

"I feel like I've had so much support," she said. "So many teachers have been very willing to collaborate."

They include Dee Christie, head of the fine arts department. The St. Albans native, who was literally born in the room where she now works — previously, the building was the St. Albans Hospital — has taught at the high school for 30 years. She said that the school has a long tradition of supporting the arts. As she put it, "We can reach kids through the arts that other people can't."

Also, Palmer noted, students in the performing arts are learning transferrable skills that will be valuable to them later in life, including public speaking, self-confidence, self-direction, collaboration, performance under pressure and understanding the different ways in which people communicate.

The dramatic arts are also a means for creating interesting, well-rounded citizens, said Doug Bell. As technical manager of the Performing Arts Center, his job includes training the students who work the sound and lighting systems. Bell also teaches engineering at BFA St. Albans and sings with the Vermont Choral Union; he'll perform this summer with the Pennsylvania Philharmonic. He uses the audiovisual systems as a way to draw in students who see themselves as more math and science oriented than "creative" types.

"It's one of the things I try to point out to my students: You're not exclusively a math geek or a jock. You can do anything," Bell said. "You need to be happy and do what makes you happy, not what other people think you should do."

Much of BFA St. Albans' focus on the arts comes from the top. Superintendent Dirth, who's been with the district for four years, spent two decades as a music teacher and band director at North Country Union High School in Newport. He has a love for the arts and a firm belief in its educational value.

"When I first started in education, the arts were considered a frill," Dirth said. And then, throughout the 1980s, '90s and early 2000s, as education put greater emphasis on standardized testing, arts funding was often the first to go, especially in cash-strapped districts.

But over the last decade, Dirth noted, research has shown overwhelmingly that students who are involved in the arts become better academicians. And it's not merely that the "better students" take music or theater, he emphasized, but that the arts make young people better thinkers.

"The arts are also important for their own sake, and we can never forget that part," he added. Go too far in teaching just the fundamentals and "you run the risk of developing ... people without a soul, without an understanding of what it is to feel and be human."