As Indoor Dining Begins, Restaurants Work to Keep Everyone Safe

Last Thursday was a beautiful June evening to dine on the outdoor deck at Shanty on the Shore overlooking Burlington's lakefront.

Cyclists whirred by on the bike path below. Seagulls kited above the bright-blue umbrellas shading each table. The strawberry-basil Moscow mule came in a frosty copper mug; the panko-crusted haddock in the restaurant's "famous fish and chips" flaked apart nicely.

But as soon as a server approached, gingerly maintaining a distance several feet from the table, eyes indicating a smile behind her face mask, we were reminded that this year is far from normal.

The Shanty, a longtime waterfront seafood destination, was closed for more than two months after Gov. Phil Scott ordered a halt to all on-site dining on March 17. When the state gave restaurants two days' notice that they could open outdoor dining with social-distancing and other safety precautions starting May 22, the Shanty team rushed to open its spacious wraparound deck.

"That was a long 48 hours," said Tony Elmore, a nine-year employee of Gobeille Hospitality Group, which owns the Shanty and Burlington Bay Market & Café.

Elmore works with two general managers to supervise operations at both locations. He had been staying busy at Burlington Bay, where the market and Vermont state liquor outlet remained open. Elmore had also been planning with his boss, Kim Gobeille, in anticipation of a gradual reopening.

On June 5, Scott announced that Vermont restaurants could open 25 percent of their indoor seating capacity, and the Shanty will be among them. The state has updated social-distancing and other safety guidelines based on those from the Centers for Disease Control and Prevention.

"People are just excited to be out." Tony Elmore tweet this

In addition, masks must be worn by all employees and are encouraged for guests when not eating or drinking.

"Having to implement all the guidelines, it's hard. Every day is kind of another challenge," Elmore acknowledged. Despite the extra work, he added, "It's been so great to see our regulars again ... Overall, people are just excited to be out."

During our recent visit, the Shanty front-of-house team seemed to be on top of the protocol. Tables and chairs were carefully wiped down between parties, and signs on every other table on the deck explained that they could not be used in order to maintain social distance. Every employee we saw wore a mask, and all servers wore gloves, though the latter practice is not required by the state.

"We've spent a lot of time on training with staff," Elmore said. "Masks are hard for people to get used to when working long shifts. They can get very hot and are hard to speak in. Being a server is a very personal situation. You want to get close to your tables, and that mask is another barrier."

Behind the scenes, Elmore explained that the restaurant had pared down its extensive menu to enable kitchen staff to meet social-distancing guidelines and to make the operation more efficient at its reduced seating capacity. On a typical busy summer night, he said, the Shanty would have seven people in the kitchen. Now it's running with four.

"We are checking in with staff constantly," Elmore said. "We just want to keep everyone safe: customers and staff." 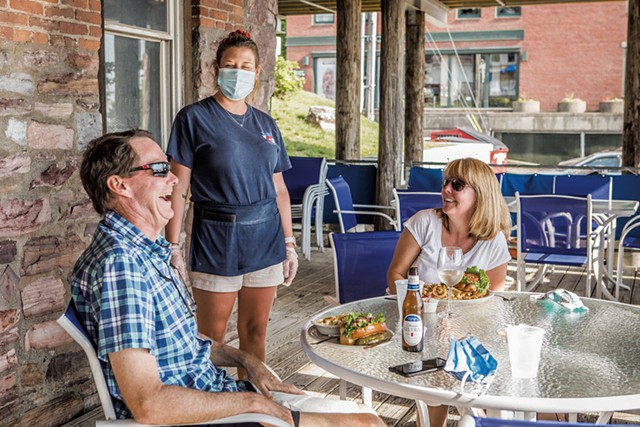 Restaurant-specific guidelines for reducing transmission of COVID-19 are a subset of Vermont's "Be Smart, Stay Safe" requirements for all businesses. The additional rules have been incorporated into the health department's Food & Lodging Program restaurant-inspection operation.

However, according to health department spokesperson Ben Truman, on-premise inspections have been suspended in order to protect businesses and staff during the pandemic, except for emergencies and foodborne outbreak investigations. To approve new licenses, inspectors have employed what Truman called "virtual inspection tools."

Food & Lodging Program staff have continued to provide guidance to businesses upon request and are conducting "food safety check outreach calls" to discuss changes in operations, ensure they have updated information and address questions, Truman wrote in an email.

He acknowledged that, especially in many small restaurant kitchens, social distancing is difficult. "We have been advising establishments to do the best they can to implement this requirement by adjusting workspaces and how tasks are completed where available, evaluating staff needed, and implementing other creative controls to implement social distancing," Truman wrote.

As of June 4, the health department had received seven consumer complaints since the restart of on-site dining. They have mostly cited employees not wearing face coverings in a variety of retail food settings. When reaching out to those establishments, Truman wrote that the team acknowledges that covering the face in hot kitchens can be a challenge. Nonetheless, mask-wearing is still considered critical to prevent additional cases of COVID-19.

So far, Truman noted, the health department's education and outreach has successfully addressed the issues. If further action were needed, the Attorney General's Office would be called upon to enforce Scott's executive order.

Speaking with Seven Days two days before outdoor dining opened, Tim Lahey, an infectious disease physician at the University of Vermont Medical Center, noted that restaurants are "going to need to figure how to do physical-distancing measures, both for staff and customers."

Lahey suggested that restaurant customers will need to determine whether they're comfortable dining on-site.

"We're going to have to make our own decisions about what level of risk we're willing to accept," he said. "If you're at higher risk, it probably makes sense to lean more on takeout and not eat there in person; whereas, if you have lower risk, you can tolerate being within several feet of another diner."

Sitting at a table on the Shanty's deck last week, the Shackfords — a family of three from Colchester — were enjoying their third meal out since May 22. Erin Shackford said they had no concerns about the safety of eating at restaurants.

"As soon as [the ban on dining on-site] was lifted, we were figuring out where to go out," said Michael Shackford, pausing between bites of his fish tacos.

His wife was happily indulging in her first Shanty lobster roll of the season. "We love it here," she said, gesturing toward the lake, "especially the view and the coleslaw."

Restaurants are working overtime to juggle pandemic safety guidelines with the need to get their businesses back on solid footing.

When customers call Shanty on the Shore for a reservation or call-ahead seating, as required by current state regulations, they are advised that tables are theirs for one hour for lunch and 90 minutes for dinner.

"We would love to give people the chance to hang out, especially after being closed for so long," said Tony Elmore, a supervisor for Gobeille Hospitality Group, which owns the Shanty, "but we want to accommodate as many customers as possible and, naturally, we are running a business."

Speaking on the phone last week, Parmelee said the webinar covers how restaurant operators can meet new safety requirements, as well as reengineer menus and analyze the revenue per seat needed for financial sustainability, as seat numbers will likely be restricted for the foreseeable future.

"For the restaurant industry, [the pandemic] has been blunt-force trauma, compared with the impact on many other industries," he said. "The industry average profit margin is 10 cents on the dollar. That speaks to the fragility."

Parmelee estimated that sales for most independent restaurants could be as low as 25 to 30 percent of last year's. The federal Paycheck Protection Program helps, especially with a recently extended period to qualify for loan forgiveness. But, he said, "It's only a temporary solution, and one could seriously question if that Band-Aid is big enough for the wound."

One huge unknown beyond restaurateurs' control is the public's interest in dining out. "We just don't know what's going to happen with demand," Parmelee said. "My own opinion is that it's going to be a long time before things are normal again."

Those who do dine out will likely find that the experience is a little different. "Customers might have to wait for tables. Things might not be as fluid as in the past," Parmelee said. "Patience is really important right now. Restaurants have to adapt to a whole new business model."

Find the latest guidelines for food businesses at accd.vermont.gov.

A recording of the live webinar, "Restaurant Survival Strategies Post-COVID," will be posted at champlainvalley.score.org.