As Green Mountain College Sells Off Its Assets, Poultney Ponders Its Future 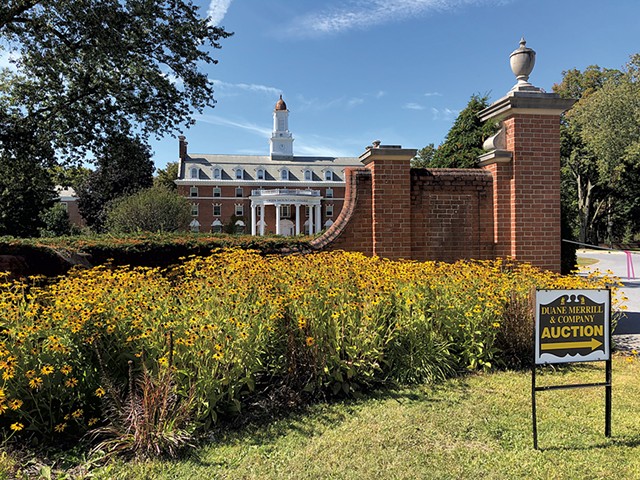 Jamie Stone stood in the dining hall of Green Mountain College in Poultney and watched last Friday as auctioneers sold off art, furniture and memorabilia at the 185-year-old private school that closed in May, shuttered by declining enrollment and financial woes.

"I love this place. I love being here," the 2006 grad said wistfully as he and two fellow alumni placed occasional bids and reminisced about their undergraduate days.

Standing next to him, Jon Brown, class of 2004, bought a set of four Green Mountain College chairs for $325 "to have a piece of the college with me after it's gone.

"It's sad. It's sad," the Colchester resident continued. "This place holds a special place in my heart."

His buddy Darren Usinowicz, class of 2007, wanted to buy carpets and art — "just something to look at and have and remember the school," the Woodbury resident said.

The sale at the small college had the air of a wake — but without the certainty of burial to follow. It's unclear what might become of the large parcel at the foot of Main Street, where the college long helped anchor the local economy of Poultney, population 3,339.

The biggest-ticket item — the campus itself — was not part of the auction. It's assessed at approximately $21.5 million and includes 22 buildings, an organic farm, a swimming pool, a gym, dormitories and a wood-fueled heating plant.

The purpose of the auction was to keep the core furnishings (such as dorm beds and dining tables) for a future buyer but raise enough money on the sale of nonessentials to heat and maintain the campus buildings over the winter while attempts to sell the college continue.

Related Unsustainable: Green Mountain College to Close in May

Unsustainable: Green Mountain College to Close in May
By Derek Brouwer
Off Message

At least a dozen buyers have expressed interest in the campus, and four or five have shown "serious" interest, Bailey said last week.

Operators of several private high schools and international schools have inquired, but there are obstacles, Bailey said. The U.S. accreditation process can take more than a year, for example. And while the handsome brick buildings and green lawns photograph well in admissions catalogs, the sheer size of the campus, 155 acres, is daunting to prospective buyers.

"It would almost be better if it were smaller," Bailey said.

He has also been working closely with the U.S. Department of Agriculture, which could end up as the de facto owner of the college. It loaned Green Mountain College almost $20 million in 2018 under its USDA Rural Development Community Facilities Programs, with the entire campus as collateral. The college also owes about $1.5 million on a private bank loan. Both creditors "want to get their money back," Bailey said.

State officials have offered advice on redevelopment, he added, as have town officials and residents.

"We are acutely aware of the impact" of the closing on the town, Bailey said. "Poultney is Green Mountain; Green Mountain College is Poultney."

The closure of the college dealt Poultney a major blow. Even before it closed, empty storefronts dotted Main Street, and now locals fear there will be more. "For sale" signs have sprouted in front yards, and some former college employees have already moved away.

Desna Jenkins, a teacher at Poultney High School, previewed auction items last Thursday after school. "It just feels really sad here. I just almost want to cry," she said. The grounds were eerily quiet, with no students going in and out of the dorms or chatting on the benches scattered around the campus.

It isn't just the undergraduates she misses. Students at the high school attended many events and often used the facilities at the college, and now the resource is gone, Jenkins said. Parents who moved as a result of the college's closure took their kids out of the local schools, forcing friends to say goodbye. "It's a great loss all around," Jenkins said. 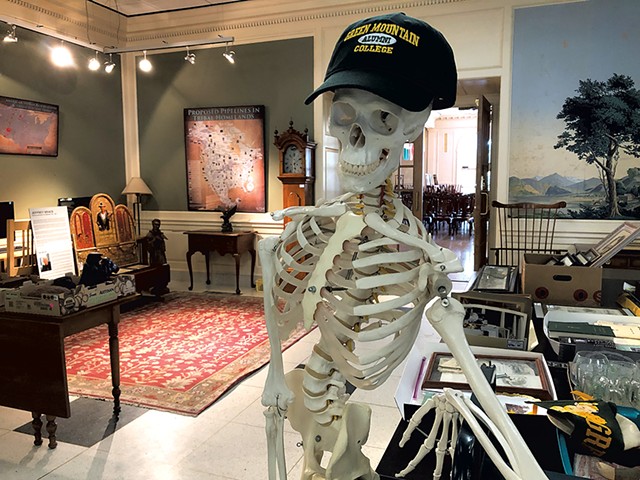 She ventured that perhaps the campus could be turned into a magnet school or get picked up by nearby Castleton University. "I hope it doesn't just sit empty, because that's going to cause decay," she said.

Others share those sentiments. "It's very devastating to see it close," said Poultney resident Cassie Kerber, as she walked with her husband, the Rev. Derik Kerber, pastor of the local Revive Church, and their three young children on Main Street last Thursday evening. Though the student population had dwindled to about 430 kids by the time the college closed, Derik said September is not the same without them.

"It was nice to see fresh faces every fall," said Derik, adding that the students seemed to "fill up Main Street." It was sad to see friends lose their jobs and some move away, the couple added.

But they love the sense of community in Poultney, its small-town friendliness and the fact that it has affordable housing. Several of the many listings in the window of a real estate agent's office on Main Street showed attractive historic homes under $150,000.

"I'm optimistic about the future and what a potential buyer could bring to Poultney ... It's just a matter of who," Derik said.

Annie Gorin is also optimistic about Poultney. She moved to town from Connecticut in 1999 to attend Green Mountain College and stayed after graduation. Along with working as a designer at light maker Hubbardton Forge in Castleton, she recently joined three partners to open a restaurant called Taco Experiment on Poultney's Main Street.

Last Thursday night, a dozen people ate taco bowls, sipped beer and chatted in the brightly painted space. The partners didn't hesitate to open after they learned Green Mountain College was closing, and since July they've sold more than 10,000 tacos, Gorin said. The restaurant has attracted students from Castleton University eight miles away, as well as locals and tourists.

It's going well, Gorin said, and she believes something will spring up at the college. "I just want to see some life back in it, the lights on," she said.

Town, state and regional leaders held a series of public meetings this spring in the wake of the announcement that the college was closing.

Russ Hoffman, who moved to Poultney from Colorado a year ago, was impressed to see several hundred people turn out at one of the meetings. Granted, many were saddened and nervous.

But people aren't just grieving; they are trying to spark new life into the economy, Hoffman said. He serves on the town planning commission and has been actively involved in Poultney Comes Together, a revitalization effort hatched to respond to the closing. In August, the boosters issued a report recommending specific strategies to help the town improve broadband access, create coworking spaces, bring a bank back to Main Street, expand recreational trails and recruit small businesses.

"I personally feel like we're in a transition, not a decline," Hoffman said.

Still, a sad sense of finality permeated the auction as the college's possessions were sold, one after the other.

Ethan Merrill and his father, Duane, of Williston-based Duane Merrill & Company, took turns as auctioneers, speaking in rapid-fire to sell 475 lots — including a 10-volume set of The Writings of Benjamin Franklin, a 30-piece set of Syracuse china, several pianos, a Jens Risom executive desk and an anatomical skeleton model wearing a Green Mountain College cap.

Buyers from as far as Los Angeles phoned in bids, and a few items went for relatively large sums. A 1958 surrealist painting by Enrico Donati fetched $7,500. There were deals, too. A Han dynasty clay vessel was scooped up for a mere $300. The changing whims of taste also were on display. A pair of gold midcentury-modern swan chairs that might have seemed dated to the undergraduates who used them in the college library were purchased by an internet buyer for $1,600.

When a Stickley waste basket came up for bidding, the alums joked about making an offer but then decided against making a trash can a souvenir of their college days.

They'd eaten hundreds of meals in the dining hall where the auction was held, and now a place that had played a formative role in their young lives was being dismantled, perhaps because the broad education it offered no longer seemed practical, suggested Stone, who said he spent 10 years teaching in Texas and is now on an extended road trip with an uncertain final destination.

Even when he was attending Green Mountain College, the education options it offered seemed somewhat impractical, he said, and by today's standards it seemed even more out of step with the marketplace.

"The idea of coming to a liberal arts school and majoring in thinking doesn't really play anymore," Stone said.

Usinowicz, the 2007 grad from Woodbury, was happy to win an 1807 political treatise for $250 — with help from Stone, who handed over half the cash and planned to share the old document with him.

It was a small victory for Usinowicz, an agriculture consultant who said he'd been through stages of grieving over the closure and continues to feel alumni were not tapped enough to help try to save the school. But the time for "what ifs" and "maybes" was done, he concluded, as the auctioneer's voice rattled in the background.

The original print version of this article was headlined "One Campus, As Is | As Green Mountain College sells off its assets, Poultney residents ponder the future"