Debbie Baker never expected to run a cemetery. For most of her life, she didn't think much about cemeteries at all. But after she was elected to the Rupert Selectboard in southern Vermont, she was invited to a meeting of local cemetery leaders. The next thing Baker knew, she was, as she put it, "tricked" into becoming treasurer of Rupert Cemetery, a nonprofit group that runs several burial grounds.

Five years later, Baker, who runs a small plumbing and heating business with her husband, finds herself the volunteer president of the organization and responsible for mowing the lawns, selling plots, arranging burials and recruiting volunteers. Despite the long list of tasks, she's found satisfaction in the role.

"I go to the cemetery, and I find it very peaceful and relaxing," Baker said. "I know that sounds weird, but for me it's about honoring all of these people from the past."

But the position also comes with worries. In recent years, the nonprofit's revenue — from plot sales, its small trust fund and a subsidy from the town — has not been enough to cover expenses. Inflation has led lawn-mowing contractors to up their rates. Meanwhile, the community is less interested in local burial; cremation — which brings in far less revenue — has grown in popularity.

"Cemeteries are becoming historical sites. The era of everyone getting a coffin and embalmed and everything else, that's not the norm anymore." Tom Giffin tweet this

To cope, Baker has started to mow the cemeteries herself and clears brush on weekends with her husband's help. She convinced the town to contribute roughly $7,000 a year and has opted to forgo some maintenance tasks, such as repairing an old section of fencing. The cemetery group's modest savings account has provided a short-term cushion, but Baker anticipates more money problems ahead.

The Rupert Cemetery's financial outlook is not unusual. Vermont's roughly 2,000 cemeteries — with their epitaph-engraved tombstones and rich historical relevance — are a quintessential part of the small-town landscape. Some are maintained by town budgets, others by churches and some, as in Rupert, by volunteer associations.

Regardless of ownership, many are finding that the books no longer balance because of changing norms around burials and the soaring popularity of cremation. The number of new burials has dropped sharply at some cemeteries. Inflation means that cemetery endowments and "perpetual care" funds donated by families to help with upkeep don't stretch as far as they once did.

"Cemeteries are becoming historical sites," said Tom Giffin, president of the Vermont Old Cemetery Association. "The era of everyone getting a coffin and embalmed and everything else, that's not the norm anymore."

The result is less revenue to mow grass, plow roads, remove dead trees, and maintain fences and gates. Lawn mowing alone can cost thousands of dollars annually. One cemetery manager noted that even the cost of grass seed had doubled this year. 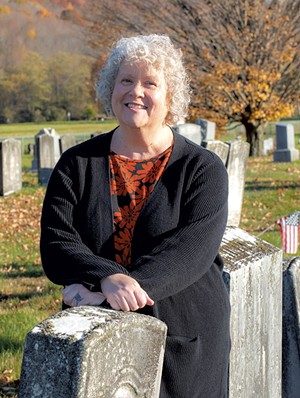 Cemetery administrators said the root of their financial problems lies in the rise of cremation rates since the turn of the 21st century. The practice is twice as common as it was two decades ago; in Vermont, 78 percent of the people who died in 2020 were cremated.

Families opt for cremation over ground burial in part to save money: Cremation can cost less than half of the $7,881 median cost of a traditional funeral in New England.

Dennis Smith, president of the Morristown Cemetery Association, said plots at the four cemeteries he manages cost $400 and can accommodate either one casket or up to four urns. "Where we used to sell four graves, now we only sell one," Smith explained. "That cuts into cash flow." He estimates that around 85 percent of all the burials in the Morristown cemeteries last year were urns.

Phyllis Drury, president of the Essex Junction Cemetery Association — which maintains two local cemeteries — said the association has had to dip into its investment funds to make ends meet. In the past five years, the balances have dropped from $48,479 to $16,978. Drury thinks what is left will fail to carry the association through the rest of the year. In the past, the burial plots sales revenue — $600 for a 4-by-12-foot plot — would cover maintenance costs. That's not the case anymore as cemeteries sell fewer and smaller plots. In 2021, the cemetery's expenses were $8,517 more than its revenue.

For Evergreen Cemetery in Rutland, one of the largest graveyards in the state, things are looking even more bleak financially. Over the summer, the City of Rutland refused a request for help from the nonprofit cemetery's board of trustees to stave off near-certain financial collapse. For now, Evergreen is running on fumes. Trustee Dave Colburn said workers are just focusing on keeping the roads clear for visitors.

Plus Vermonters, like other Americans, are become more mobile. As young people leave the state and newcomers settle in small towns, burial traditions can wither, along with volunteers' commitment to the local burial ground.

"You don't get the same continuity of community that has the time or energy to care," Drury lamented.

As a result, the job can fall to the willing few. Shimmy Cohen, volunteer caretaker of a handful of the Jewish cemeteries in Burlington, said he devotes time to them in the evenings and on weekends. Why? "A lot of my relatives and a lot of my friends are buried there, so I want to make sure it looks nice," he said.

Many of the volunteers who maintain Vermont cemeteries are seniors themselves. These individuals fear that when they are gone, knowledge of and attention to cemeteries will be lost. In Rupert, Baker worked with an older board member with dementia to catalog the historic plots in the town's cemeteries. Baker worries about who will carry on that knowledge after her.

Some cemeteries are getting creative with their finances in order to make ends meet. Ahavath Gerim Synagogue is trying to sell its temple in order to obtain funds to maintain its cemetery in South Burlington. The Archibald Street building served as Burlington's first synagogue, and the property includes facilities used in the Jewish faith to prepare bodies for burial.

Drury suggested that the Town of Essex share lawn-mowing equipment with the cemeteries as a money-saving tactic. And plenty of cemeteries are asking their town selectboards to help pay maintenance costs.

Ultimately though, a reimagining of Vermont's cemeteries, and the finances needed to support them, may be necessary to ensure they are not abandoned. At Green Mount Cemetery in Montpelier, for example, prison work crews used to mow the grounds. When the crews stopped coming during the pandemic, Patrick Healy, director of the cemetery and president of the Vermont Cemetery Association, opted to forgo lawn mowing altogether in the historical section of the cemetery.

Front Porch Forum commenters hopped on the issue. Some complained that the tall grass was a disgrace to the deceased. Others thought it looked beautiful. Healy's decision is not so strange, though, from a historical perspective; until the 1950s, cemeteries in New England were not mowed. That's why epitaphs on old tombstones are so high — to account for summer grass.

"Before folks develop an opinion of a cemetery just driving by, I encourage them to look around and talk to the people who work there," Healy said. "See how the finances work."

That's on Baker's mind, too. Rupert Cemetery was recently asked to take over a fifth burial ground; its caretaker told Baker that she ran out of money and didn't have the energy for the upkeep anymore. The question has not been resolved.

Baker is not sure how she'd afford lawn mowing and maintenance for four or five cemeteries in the years to come. "Who's going to replace me?" she wondered out loud. "There's just no money."

The original print version of this article was headlined "Plot Twist | As fewer people choose burial, Vermont's cemeteries struggle to maintain their grounds"