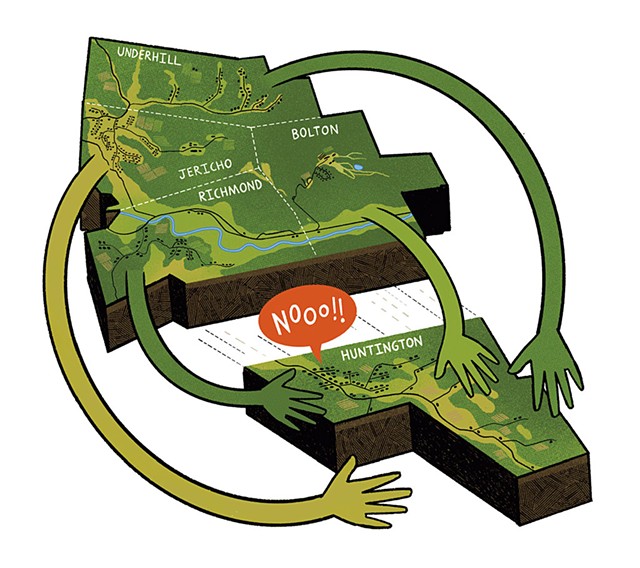 On July 1, the Huntington School Board will effectively cease to exist.

Unless a court intervenes, the five-member board overseeing Brewster-Pierce Memorial School will lose its authority over how the school's 136 K-4 students are educated and its $2.1 million annual budget is spent.

Instead, that responsibility will shift to the 15-member board of the Mount Mansfield Modified Union School District, which governs eight schools in four towns north of Huntington: Bolton, Jericho, Richmond and Underhill.

In some ways, the reshuffling seems modest. A district with eight schools in four towns will now govern nine schools in five. And Huntington already has two seats on the Mount Mansfield board, representing the town's fifth to 12th graders, who attend schools in the larger district. That won't change.

But Act 46, the most significant overhaul of Vermont school governance in decades, has cost the town control of its elementary school.

Huntington resident Megs Keir feels dejected and disillusioned. "They just created a mess," Keir said of the legislators who passed Act 46 and the state education officials who enforce it.

The state's torturous four-year effort to encourage — and, failing that, require — school districts to consolidate under the law is lurching toward a confusing, messy conclusion.

Following the collapse of efforts by lawmakers to extend the July 1 deadline for some districts, that date now looms large. Districts have begrudgingly scrambled to take steps required to meet the state deadline, even as they hope that courts will undo it all.

"We're pretending that the illegal things they are doing are legal, long enough to get our students safeguarded," said Jack Bryar, a member of both the Grafton and the Bellows Falls Union school boards, and a driving force behind local opposition to consolidation.

The state ordered the towns of Athens, Grafton and Westminster to dissolve their school boards and create the Windham Northeast Union Elementary School District for prekindergarten through eighth graders. For months, the district resisted taking the steps the state demanded, though Bryar blames education officials and the attorney general for their share of foot-dragging.

Whoever is to blame, the district is now the only one in the state that cannot meet the July 1 deadline when the new districts are supposed to be fully operational, meaning they have a board and an approved budget in place.

On June 6, after a series of delays, a new six-member transitional school board was established, made up of two members from each town. At that point, however, the earliest the new board could warn a budget vote for was July 15 — two weeks after the deadline.

The fact that districts are now taking steps they long resisted is a sign that many school boards felt backed into a corner, said Bryar, a retired management consultant.

"What individual school districts faced across the state was a North Korean-style election, where they were asked to vote on something and threatened if they did not vote a certain way," Bryar said. "That is an obscenity."

Act 46 went into effect July 1, 2015, and is meant to save money and improve educational opportunities for Vermont's shrinking population of K-12 students. At that time, there were 247 school districts in the state, ranging from independent rural districts with a single school — such as Huntington's — to large unified districts made up of schools from multiple towns.

Of the 96 districts that had refused to voluntarily merge, 47 were able to convince the State Board of Education that they had good reason to maintain the status quo.

But 45 others received no such accommodations. Last November, the state board ordered them to merge by July 1, 2019. Four elementary school districts were also required to merge with union districts, subject to voter approval.

Many of those 49 total districts, including Huntington's, have sued to block Act 46 as unconstitutional. Those cases, one of which has 30 districts as plaintiffs, are pending and likely heading to the state Supreme Court.

Aware that some districts might not have budgets in place by July 1, state officials last week reiterated what would happen to such recalcitrant districts. In essence, they'd be given some financial maneuvering room, but would receive far from the funding levels districts with approved budgets would enjoy.

Taxes would still be levied to pay for schools, but a new district couldn't spend those revenues until voters approved a budget.

And if no one has been appointed to a transitional board, the state would step in. If all seats on the board were vacant, the secretary of state would call a special election and, in the interim, "authorize a qualified person" to pay the district's bills.

For a while, it looked like that might actually happen to the new Windham Northeast Union Elementary School District, Bryar said.

Finding volunteers willing to sit on the transitional board of the new district proved nearly impossible, he said, because community members feel so disenfranchised by the process.

"Welcome to what happens when you suppress democracy and you rub it in people's faces," he said.

That kind of visceral response to Act 46 is something that Nicole Mace, executive director of the Vermont School Boards Association, has seen plenty of in the last couple of years. The association has tried to steer members through what she calls a "hugely historic piece of public policy."

"We had schools that had one teacher teaching three grades, or like, two second graders, or no kids at all in second or third grade," Mace said.

Instead of viewing a merger with a larger district as a threat to their schools, Mace has always seen it as an opportunity to provide the resources necessary to keep schools open.

Brewster-Pierce principal Sally Hayes said there is a great deal of confusion in Huntington over the merger. While many opposed to Act 46 mergers worry that consolidations will accelerate the closure of small schools, that's not actually a risk in Huntington. Enrollment has been steady.

School staff support the merger because it makes sense for the town to merge into the same district attended by the town's middle and high school students, Hayes said. To make things even more complicated, the elementary school has technically been part of its own subdistrict called the Chittenden East Supervisory Union School District, which will also be dissolved as of July 1.

"This has been the law since 2015. As the date gets closer, we're feeling like we should comply with the law," Hayes said.

Sticking to the original deadline will bring some finality to the process, said House Education Committee chair Kate Webb (D-Shelburne). She got a lot of calls during the session from superintendents who begged lawmakers not to extend it.

"They just said it's going to keep them locked in the Act 46 vortex," Webb said.

Whatever the future holds, Keir wants the consolidation process resolved soon so the community can move past the acrimony it stirred.

She and her husband, Duncan, have lived in the town of 1,900 on the western flank of Camel's Hump mountain for 40 years, and their two grown daughters attended the elementary school. Keir, who served on the school board for several years, always marveled at how the town's diverse residents — a mix that includes retired tech executives, farmers and loggers — pulled together to solve school problems creatively.

That cohesion has been strained. While many residents opposed losing control of the school, a number of teachers signed a petition urging a merger, stressing the benefits of improved training opportunities in the larger district.

Act 46 also created tension between Huntington and nearby towns, where residents at times complained that Huntington's repeated opposition to merging was tantamount to holding them hostage, Keir said.

The hard feelings will likely fade once the legal challenges are resolved and the future is certain, Keir said, but until then, residents feel in limbo.

"It's totally confusing and crazy," she said.