Artwork By Ukrainian Children to Be Sold at Burlington Fundraiser 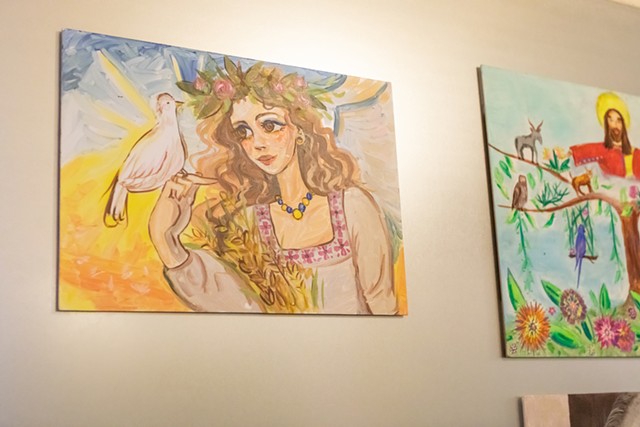 Artwork by Ukrainian children who’ve been displaced by war will be for sale at a fundraiser on Wednesday, January 11, at Burlington City Hall Auditorium.

“Resilience: The War Through Ukrainian Children’s Art” consists of 70 paintings and drawings done by children ranging in age from 5 years old to teenagers. Proceeds from the event will benefit the nonprofit Actions Beyond Words, said board member Adam Roof.

The organization’s Mission Ukraine project provides food, shelter, medical supplies and other necessities to people in Ukraine, following the Russian invasion in February of last year.

On an August trip to Ukraine, Roof and his colleagues saw that children and teens living in shelters and other temporary homes were making artwork. They recognized art could be a means of connection between Burlington and Ukraine. “Burlington’s a creative community,” said Roof, 33, who is also chair of the Burlington Democratic Party and a former city council member. “We’re also a community that wants to learn through creativity. And we’re a giving community.”

Art will be sold at the event by three methods: live auction (presented by auctioneer Doreen Kraft, executive director of Burlington City Arts); silent auction; and marked with designated prices. The last will range from $25 to “upwards of a couple of thousand dollars,” according to Roof. “We want to raise money,” he continued. “But we also want to keep the barrier of people being able to bring this stuff home as low as it needs to be."

About 40 paintings and drawings are on display in the city hall lobby, where they will be on exhibit through February — unless they're all sold at the fundraiser. The kids’ art is not of the destruction of war,  but of beautiful buildings from their hometowns, including houses of worship and an opera house. The children also painted and drew farmland, birds, angels and sunflowers, the national flower of Ukraine.

"I think the really cool thing [is] children and their families chose to send back paintings ... of the beauty of their towns," Roof said.

Making art “allows you to forget what’s going on and to be within yourself and to feel safe,” Kraft said. “It’s a way to express your feelings. So there’s comfort and a sense of peace and a sense of being part of something bigger than you.” Actions Beyond Words has a fundraising goal of $100,000, Roof said. The Antonio B and Rita M Pomerleau Foundation has contributed about $60,000 to the group, according to Roof. While providing necessities for displaced families is the organization’s priority, a portion of funds will go to purchasing art supplies, he said.

The event on Wednesday will include free food and drinks. The menu from Sugarsnap Catering is inspired by Ukrainian cuisine; Zero Gravity Craft Brewery and Fiddlehead Brewing will provide beverages; staff from Manhattan Pizza and Pub will offer service, Roof said.