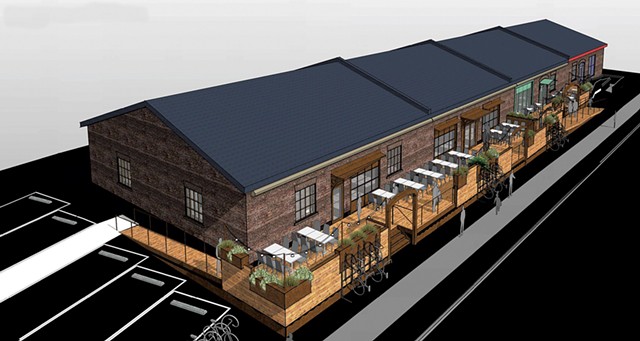 Magic Hat Brewing cofounder Alan Newman has hired experienced Vermont distiller Joe Buswell to work full time on a new Burlington distillery that is currently under construction. Newman hopes to open it this summer at 400 Pine Street, adjacent to ArtsRiot, the restaurant, bar and event space that he bought in July 2020.

A self-described "serial entrepreneur," Newman also cofounded Seventh Generation and co-owns Higher Ground, the South Burlington music venue. Buswell has worked for several Vermont distillers over the past 20 years, including Caledonia Spirits in its original Hardwick location and Wild Hart Distillery in Shelburne.

Buswell's first day was February 15, and one of his priority tasks will be to home in on specific spirits. "We want to provide something unique," Newman said. "Joe brings with him a lot of history in Vermont distilling. With him on board, we'll be able to start dialing in a little bit better."

The distillery will occupy the former ArtsRiot ticket office and offer tastings and tours, Newman said. He described it as "a fun addition to ArtsRiot, which will provide a great outlet for testing what we are making."

Besides the distillery's construction, renovations under way at 400 Pine Street include improvements to the temporarily closed restaurant and event space and the addition of an extensive deck.

"My fantasy is that we're actually distilling and open for business in June," Newman said.

He compared the currently "burgeoning distilling industry" to craft brewing in the early 1990s. "I've been in the beer industry for 25 years," he said. "Maybe I know too much, but it's not an industry I would go into today."

As for ArtsRiot, Newman hopes that expanded outdoor seating will make it possible to reopen the "great neighborhood gathering place" for food and drink by late March or early April. When it is safe to do so, he said, ArtsRiot will once again host live music and other events.

Newman would also like to restart the popular summer South End Truck Stop if state regulations allow. "We see it as part of our DNA," he said.