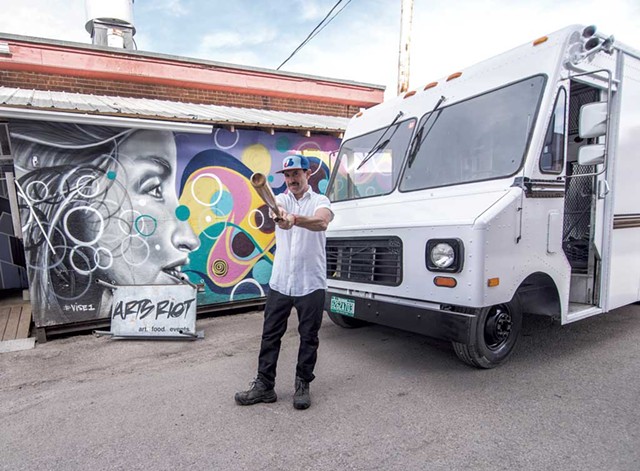 His first truck-stop gig of the season was a few hours away, and George Lambertson, in chef's whites, was prepping for the event. In the alley behind ArtsRiot on Burlington's Pine Street, under the noon sun, Lambertson painted a fresh black stripe across the midsection of his truck.

That evening at the waterfront, where Lambertson's truck was parked at Foam Brewers, the U.S. flag flew from the front of the rig. At the window, Lambertson, chef and co-owner of ArtsRiot, took orders and served burgers, gyros and bowls of broccoli and tofu.

"Three minutes," he told one customer, who'd asked about the wait for the broccoli dish.

The pace was reasonable at Foam: a kind of slow-motion warm-up for the high-energy ArtsRiot Truck Stop, which kicks off its sixth season on May 18. Every Friday, in the parking lot off Pine Street, 15 to 20 mobile eateries serve tacos, burgers, barbecue, fried chicken, veggie bowls and more — drawing about 1,600 people a week, according to Felix Wai, a founder and co-owner of ArtsRiot.

The Truck Stop, which started with three vendors on a rainy Friday, predates the opening of ArtsRiot by a few months. It was founded to make money for construction costs so that ArtsRiot — a restaurant, bar and music club — could open for the 2013 South End Art Hop. "Creativity bred by necessity," Wai said. "Truck Stop was one of the events we came up with to get people excited about what we could do."

Early on, Lambertson was part of the Kitchen Collective, a rotating group of chefs who took turns cooking in the ArtsRiot kitchen. After about a year, he became sole chef of the restaurant; he runs the food truck seasonally.

Last week, in the hours before his truck made its 2018 debut at the waterfront, Lambertson had another activity to manage: coaching the Edmunds Middle School baseball team. The game against Milton's middle school team, a victory for EMS, was held at Calahan Park in Burlington's South End — the field and the neighborhood of Lambertson's childhood games.

In a break from painting his truck, coaching kids and serving customers, Lambertson, 37, took time to talk with Seven Days.

SEVEN DAYS: In five years, the ArtsRiot Truck Stop has become a defining feature and prized activity of summer in Burlington. How'd that happen?

GEORGE LAMBERTSON: I think the timing. The opening of Truck Stop — in parallel with the emergence of Pine Street, combined with the neighborhood — really is what gave birth to it. And I think the rest of the city fell in line. It's the South End. It's summer: beautiful people, delicious food, cold drinks, live music. I think it's a true celebration of summer in Vermont.

SD: You grew up in the South End; this is your home turf. What was Pine Street like when you were a kid?

GL: When I was a kid, Pine Street was a shithole. The only place to eat was the Cumberland Farms. And those hot dogs are probably still spinning on the rotisserie today. We played a lot of baseball at South Park [now called Calahan], but that was it. Pine Street was a way to get to downtown. But if you wanted to get there via bike, you took the bike path. Pine Street was essentially to be avoided.

SD: You play shortstop for the Burlington Cardinals, a star-studded baseball team with a roster that includes Mayor Miro Weinberger and Bill Lee, a leftie who pitched for the Red Sox and the Expos. Who has a better arm, Miro or Lee — and who's a better cook?

GL: Bill definitely has a better arm. Bill is the pitcher; Miro's the backstop. No shame to Miro — love you, buddy. Bill loves to talk about cooking. Bill runs the conversation. He's a man of many passions.

SD: Have you ever seen Bill shake off the mayor?

SD: Can you describe skills or strategies that you use on the ball field that come into play in the kitchen, and vice versa?

GL: The ability to think on the fly, creativity and looking good — always. Talking shit. There's a lotta trash talk on the ball field and in the kitchen. They both tap into the most competitive part of my spirit. In baseball, it's not as subjective: You win or you lose. In cooking, there isn't a win-loss record at the end of the day. But we try to put together more successful services.

SD: How'd you get into cooking?

GL: I was a very young age — 5, 6 years old. It was the only thing I ever wanted to do. I just loved dining out when I was a kid, and I took my first dishwashing gig when I was 15 at Vermont Pub & Brewery. It was 1995, the summer, and I never looked back. I was good at it. I was a good dishwasher. I wish I could hire myself.

SD: There's a lot of concern about, and interest in, how the carrots and onions we eat are raised. But there seems to be less discussion about whether a line cook makes enough money to pay rent. Why is that?

GL: I think that, throughout time, manufacturers always get the shit end of the stick. The people on the manufacturing floor, they always get overlooked, and they are the least compensated. And, in terms of carrots and onions, we can tell a story about them, and that gives people something to hold on to. The cook's story is not told. They are not heard from or seen. As an owner, that balance is one of the hardest things to manage.

SD: You have the prime parking spot in Burlington — center stage at the Truck Stop, looking out over the action. What would you trade it for?

GL: I would trade it for the Expos to return to Montréal, and nothing else.

SD: ArtsRiot is its own combination of music club, community gathering space, barroom, art gallery and restaurant. How did you construct the kitchen — and menu — so the food becomes its own destination and draw?

GL: One day at a time. I write a menu every day, and I draw on past experience to put together today's offerings. I'm trying to create a legacy for the neighborhood: just to have the coolest place to come to.

SD: How do you manage the flow of people on a busy night at the Truck Stop?

GL: Fiercely. It requires a certain cadence or tone of voice to command that situation. I have two sides coming at me pretty hard. I have cooks cooking as fast as they possibly can, and a line of 100 people that are yelling and screaming at me to get a burger. And the trap music [in the truck] blasting on 11.

SD: You said you liked to eat out starting at an early age. Where'd you go?

GL: I think of Mary's when it was in the downtown space in Bristol. Restaurants in Middlebury, like Mister Up's or Fire & Ice. I have really good summer memories at Beansie's. Another good throwback is the burger stand at the Bristol rec field, under the stands. It was awesome. That was really lit. It was a covered stand, a little snack shack [with] burgers, dogs, fries, Coke. 'Merica.

The original print version of this article was headlined "Truck Time"