'Artists in the Archives' at the Henry Sheldon Museum Collages History

The Henry Sheldon Museum of Vermont History in Middlebury touts its unique status as "the oldest community-based museum in the country." Owing to its location in New England — and its donors — the objects and documents it houses largely reflect the legacy of white settlers to the area. And that very word "oldest" can suggest a musty collection of artifacts that no one wants to see more than once. But, like museums around the world, the Sheldon has in recent years been examining its holdings and exhibitions with an eye toward a more inclusive and relevant existence.

The museum's Stewart-Swift Research Center archivist, Eva Garcelon-Hart, puts it like this: "What are we, really, and where are we heading?"

The challenge of a history museum is to continually prove itself germane to the present. Happily, with some effort and innovation, it can. The current exhibition, "Artists in the Archives: Community, History & Collage," is one such effort, spurred by the 50th anniversary of the Stewart-Swift center.

Ric Kasini Kadour, a former Vermonter who now maintains residences in Montréal and New Orleans, is director of the Kolaj Institute and editor and publisher of Kolaj Magazine. He has continued to curate local projects, including at the Southern Vermont Arts Center and the Rokeby Museum. Under his guidance, and with the collaboration of Garcelon-Hart and collections associate Taylor Rossini, 23 artists from seven countries were engaged to make collage prints for the Sheldon exhibit "Artists in the Archives."

The idea was for the artists to scour the museum's archives and select a single or related group of items, which they would then incorporate into an original collage. Garcelon-Hart said she presented the participants with 80 to 100 images representing the museum's collection. The resulting collages reflect not just the subjective interests of individual artists but also some zeitgeist topics, including race, prejudice, immigration, reproductive health care and the environment.

"Collage artists have unique skills that are particularly useful in our historical moment," reads text in a book created for the exhibit. "They understand that something beautiful, something meaningful can come from chaos." 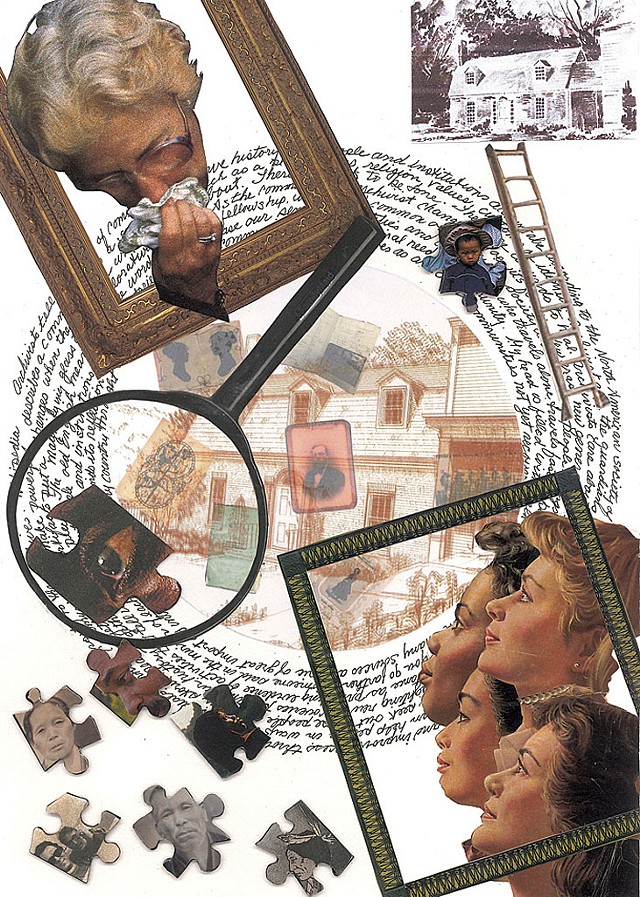 In an artist statement for her collage "The Past Informs the Future," California artist Vicki Scheele notes that she "came to view the Center itself as a metaphor for collage and developed a real appreciation for how the community surrounds and is informed by archivists." Her piece incorporates artwork, picture frames, puzzle pieces and her own handwriting in concentric circles to celebrate "the many lives brought back to life by the archivists," she writes. But on a broader level, Scheele underscores how contemporary witnesses can learn from those who came before us.

Several artists picked up on the dearth of archival material featuring people of color. For her collage "A Fly in the Buttermilk," Jeanna Penn, also from California, found an early 20th-century photograph with a lone Black woman, Louise Manning, and three white women. One of the latter holds a croquet mallet, suggesting a social outing. Penn enhances the pretty femininity of the piece with vintage floral illustrations and a gilt frame. Yet in her statement she acknowledges, "A community may be willing to open itself to one or two individuals they see as outsiders while refusing to embrace the group as a whole."

Ginger Sedlarova, from British Columbia, does much the same with "May Their Memory Be for a Blessing." She focuses on Jewish shopkeeper Harry Lazarus, whose department store opened in Middlebury in 1911. The haunting piece overlays old photos of brick storefronts, the outline of a Passover candelabra, a Star of David, largely unreadable handwriting, and white silhouettes of a fedora-clad man and a young boy. The words "Clearance Sale in full blast" are prominent.

"This collage celebrates the beginnings of what would grow into a strong Jewish community in Middlebury," Sedlarova writes in her statement. "My hope is that this collage will inspire the Jewish residents of Middlebury to donate archival materials to the Henry Sheldon Museum for future generations to discover."

Anika Steppe's "Untitled (Companions)," as a work of art, is hard to parse. A close-up photograph of dark green grass dominates the picture plane, and over this the Chicago artist interjects three nearly identical images: Each is a color photograph of a hand holding a vintage black-and-white photograph. We learn from reading her artist statement that these are pictures of humans with animals. She writes that searching for "dogs" in the Stewart-Swift archives turned up 117 results. "Tucked in intermittently," she notes, were images of unidentified girls or young women "sitting on grass surrounded by animals."

If the artwork is frustratingly obscure, Steppe's concept is unusual and interesting: the place of companion animals through history. Victorian-era parents, she observes, began to believe keeping pets was "a way to develop the good character of children," according to the exhibition book. Community accommodations for the infrastructure needs of pet owners, such as dog parks, are far more recent innovations.

The curator-artist rightly observes that the historical record includes people playing and having fun. tweet this

Some of the collages in the exhibition are necessarily subdued, color-wise; the artists received scanned copies of vintage photographs or documents, which were then reprinted for the final artwork. That is definitely not the case with Irish artist Anthony D Kelly's "Close Knit." He chose to address Vermont's history of sheep herding and textile making. His exuberantly colorful collage incorporates advertisements from the 1970s, a photograph from 1881 and a stock image of a quilt "to make a visual connection between fields and textiles," the book explains. Folky illustrations of woolly black sheep adorn the bottom of the image, as well as two diamond-shaped pieces in the quilt.

"Alongside the creation of physical items, there is the deep social good which exists in the sharing of traditional skills," Kelly writes. Working and creating together, he adds, knitted communities together through generations.

Kasini Kadour, a connoisseur of the collage art form, also contributed a richly hued and handsome piece, titled "The Games Artists Play." The image features early 20th-century rectangular and round playing cards rising out of a black-and-white paint can. A vintage blue-on-black pattern fills the background, while two resting lions — like the kind that guard library entrances — face off at the bottom of the page.

Taking his cue from a pastime of the museum's namesake, Kasini Kadour writes that Henry Sheldon loved playing games and believed they were a way to connect with his community. Kasini Kadour also makes a connection between Sheldon's play and the sense of playfulness that artists can bring to their work. "I photographed the playing cards and the wallpaper on a visit to the Henry Sheldon Museum in April 2022," he explains in the book. Later he came across an old newspaper advertisement for the paint can, "which was the perfect symbol for artists."

The curator-artist rightly observes that the historical record includes people playing and having fun, just as play "allows artists to enter a liminal state where new ideas can emerge."

"Artists in the Archives" illustrates that not all the lessons from the past are admonitions.