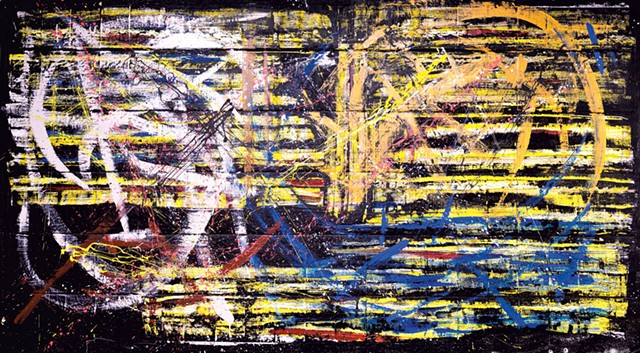 When the pandemic drove us indoors last year, many Vermonters turned to baking or movie bingeing. Mark Rosalbo turned to house paint. Lots of it.

Suddenly working at home and sharing the broadband with his wife, Cindy, and four kids, the Randolph resident said his household was "insanely busy." So he found himself puttering in the basement and painting — on cardboard, scraps of wood, whatever.

An insurance broker by day, Rosalbo is also a musician and composer who studied theater arts in college. But before COVID-19 arrived, he said, he'd never made visual art.

Little did Rosalbo know that, within a year, he would be exhibiting his pandemic paintings in a gallery. He would also inadvertently be involved in a bit of a ruckus, one fueled by this country's deep political divide and the disinformation that widens it.

Rosalbo's largest painting, the 4-by-8-foot "Graffiti Art," is currently displayed in the window of ART, etc. in Northfield. Gallery owner Andrea Melville said she couldn't fit the piece with the rest of Rosalbo's work in the venue's back room.

Specifically, explained barber Randy Peace, whose shop is downstairs from the gallery, he saw in the painting "a big letter A with a circle around it, and it's over what resembles stripes on a flag."

Peace said he was aware that a capital A inside a circle is a traditional symbol for anarchy. But, he insisted, "If you google that symbol, it has been used by antifa. That's my view on it."

For the record: Antifa is a loosely structured left-wing political movement whose name is short for "anti-fascist." While it has no official symbol in the U.S., two frequently used ones depict overlapping black and red flags in a circle or three arrows in a circle, both derived from German anti-fascist movements. According to a 2017 Washington Post story on the movement's roots, anarchism and antifa "are often lumped together, although not all antifascists identify as anarchists."

"One of the points was to try to understand the increasing divisions in this country." Mark Rosalbo tweet this

Peace isn't the only one upset about the painting, he said. He alleged that members of the "military community" were also put off. (Military academy Norwich University is nearby.) Peace cuts the hair of conservatives and liberals alike, he pointed out, and he thinks that business owners in the small town should remain "neutral" about politics.

Regardless of anyone's thoughts about antifa, Rosalbo said he had no intention of alluding to it in "Graffiti Art." In abstract art particularly, he surmised, people will see different things. They certainly do in the brushstrokes of this painting.

Rosalbo said he found out about the backlash late last month when he got a call from Melville while picking up his kids from school. Her landlord was in the gallery and "pressuring her that the work was antifa," Rosalbo said. "Andrea was upset."

If she was shaken at the time, Melville — a former public television producer and Emmy Award winner — wasn't about to be intimidated. Later, she candidly described the landlord encounter in a letter to her email list, without mentioning his name:

I told my landlord a short explanation about the painting ... and then it began. He stated he had received complaints from the "military" community in town. We love America so why is there an Antifa logo & symbol represented in the painting in the window?

I said that was ridiculous and absurd, it's Abstract Art and nothing else.

He then went off on a long, nauseating rant about Antifa being a domestic terrorist organization responsible for all of the protests, riots and deaths in this country. It's all over the news, he said. I suggested he begin reading, listening to and watching legitimate news sources.

Melville also noted that the landlord said he might not renew her lease. "When I asked if he was threatening me, he just shrugged and left," she wrote.

After this experience, Melville registered a complaint with the local police chief, who assured her of her First Amendment rights and that there was "nothing these accusers could do." She also contacted the American Civil Liberties Union of Vermont, the Vermont Attorney General's Office and the Vermont Human Rights Commission.

Hoping to get a response from Melville's landlord, David Fernandez, Seven Days called him at the family's longtime business, Fernandez Hardware, down the block from the gallery on Depot Square. When told the reason for the call, he said, "I have no further comment on that" and hung up.

Melville said another member of the Fernandez family came over a few days later with a "sort of apology."

Melville is aware that some of her previous signage has rankled certain community members. In response to the current brouhaha, she lashed out by displaying a strongly worded, hand-printed message in her window: "To all racists and Fox News-loving bigots: This painting is not what you claim it to be. It is art. Period."

A few locals told Melville they found the sign insulting, describing themselves as Republicans who watch Fox News but did not vote for Donald Trump. "After a very civil discussion" with one of these individuals, Melville said, "I decided to take the sign down." Not, however, before VTDigger.org published a photo of it in an article about the art controversy.

Melville is new at being a gallerist — and a business owner. She launched ART, etc. in 2019 after taking the Women's Small Business Program at Burlington-based Mercy Connections. She credits local artist and teacher Carolyn Zuaro with helping her set up the shop.

Raised by an artist mother, Melville said she loves art; she also appears to relish defending freedom of expression. She has plastered the gallery window with so many messages from supporters that they nearly eclipse the artwork at the center of the kerfuffle. Some of those supporters, Melville observed, are retired military personnel.

The messages greeted visitors who turned out for a reception last Friday. But controversy was less evident inside the gallery, where, along with an array of pottery, jewelry, candles, soaps and textiles, they found floral paintings by Montpelier artist Katie O'Rourke. Pretty, feminine and meditative, her close-up studies of hydrangea blossoms rendered in pastel hues seem a blissful world away from human conflict.

Rosalbo's paintings are hung salon-style in the gallery's back room. He made these and many more, he explained, in response to events and trends of the past year: the pandemic, Zoom communications, the Black Lives Matter movement, even the weather and a personal pastime, running. Most of the paintings are nonrepresentational, although one is recognizably an American flag spattered with "blood," and a few include text.

"One of the points was to try to understand the increasing divisions in this country," Rosalbo said of his art making.

Rosalbo also wrote George Winston-inspired piano compositions to accompany each of three groups of paintings. Visitors can listen to the melodies, just a few minutes long, via a QR code and a smartphone.

"The entire idea of putting the music together," he said, "was to enhance the experience of looking at the artwork."

Minimal and calming, these snippets of sound seem to extend an aural link to O'Rourke's botanical beauty in the adjacent room.

Prior to the reception, a patron purchased Rosalbo's "Graffiti Art" for $800. On Friday, red "sold" dots appeared beside other paintings. The masked attendees seemed happy to be out, socializing and talking art.

For his part, Peace said he hopes that when the exhibit closes, the conflict will be laid to rest. "I'm pro-business, and I'm pro-ART, etc.," he said. "Nobody needs any more hassles and hard times."

For 21 years in the U.S. Air Force, Peace added, he defended the Constitution — and whoever held the office of the presidency.

He could have been echoing Gen. Mark Milley, current chair of the U.S. Department of Defense Joint Chiefs of Staff, who on May 1 delivered the commencement address at Norwich University.

"You know, there's over 190 countries in the world that are in the United Nations, but we, the United States of America, we're the only one to have a military that swears an oath to a document. Not to a person, a tribe, a religion, but to an idea...," Milley told the graduating cadets. "[T]he idea that's in that Constitution, the idea that my parents fought for in World War II, the idea that has propelled us through our darkest days as a nation, affirms that every single one of us is created equal in the eyes of the law."

The original print version of this article was headlined "A for...?"