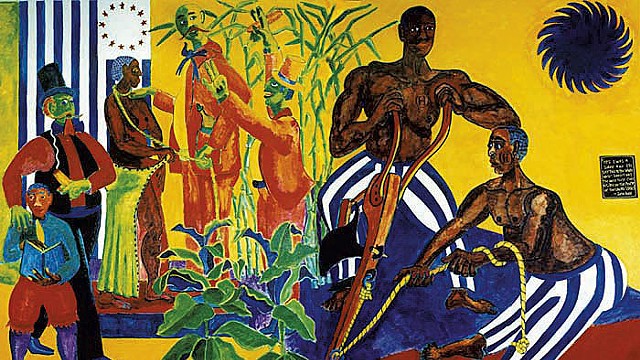 In July 2020, Vermont Law School announced that it would remove from its campus a large mural that had incited controversy among students and faculty for its portrayal of slavery, African Americans and the Underground Railroad. Eight months later, the mural remains. Its removal has proved complicated — and could be a test case for an obscure federal statute regarding visual artwork.

Thomas McHenry, then-president and dean of the South Royalton law school, initially announced that the mural would be painted over. Sam Kerson, the artist, objected. The plan was amended to give Kerson a chance to remove the mural. But carpenters determined that removal would require the work to be cut in pieces, constituting destruction.

Finally, VLS administrators came up with what they considered a compromise: The mural would be covered permanently with acoustic panels, which would not directly touch the artwork.

In December, Kerson filed suit against the school in U.S. District Court. He alleged that covering the mural permanently would constitute a violation of the Visual Artists Rights Act, a 1990 federal law that protects an artist's work from "intentional distortion, mutilation, or other modification," according to its text.

Some organizations that commission artwork have the artists sign away their VARA rights. VLS did not, an apparent oversight that Chief Judge Geoffrey Crawford pointed out during a preliminary hearing on February 24 that was held to determine what to do with the mural as the case proceeds.

"I don't quite understand how an institution composed of attorneys and law professors could have got themselves in this pickle," Crawford observed.

According to court filings from Kerson's team, the mural is composed of two large panels titled "Vermont, the Underground Railroad" and "Vermont and the Fugitive Slave." The work was funded by the Puffin Foundation and painted by Kerson in the school's Chase Community Center in 1993 and 1994. It has been the subject of debate and student complaints for years, according to court documents.

Various scenes in the work depict Black people being whipped by a slave owner and attacked by a dog; Black people drumming and holding tribal masks above a tied-up slave owner; a white woman hiding Black people from a bounty hunter; and famous abolitionists, including John Brown, Frederick Douglass, Harriet Tubman and Harriet Beecher Stowe.

Kerson is a Goddard College graduate who has also painted murals in Nicaragua and at the Vermont State Office Complex in Waterbury. He intended the VLS mural to illustrate the path toward liberation for enslaved people and Vermont's role in that story, according to writings on his website and a video about the making of the mural.

In a declaration filed in court, Shirley Jefferson, the VLS associate dean for student affairs and diversity, wrote that, since she joined the law school staff in 1999, "students of color and some white students as well came to me from time to time to express their discomfort with the mural." Jefferson, a person of color, said she typically told the students to try to ignore the mural and focus on their education.

In 2013 and 2014, the VLS Diversity Committee discussed student and faculty objections to the mural. Plaques were added to explain its purpose and context.

In May 2020, after George Floyd's killing by Minneapolis police sparked nationwide calls for racial justice, two second-year students wrote and circulated a petition calling for the mural's removal. Jameson Davis and April Urbanowski wrote that "there was/is a group of BIPOC students who felt the mural to be inaccurate and dispiriting — so much so that a few decided not to study or interact with that part of campus."

The mural's exaggerated depictions of African American features resemble "caricatures designed to perpetuate the white superiority views that have been embedded on our entire societal structure," the students wrote. In their view, the mural portrays certain white people as saviors. Davis and Urbanowski compared the mural to Sambos, minstrel shows and "coon caricatures" — racist, degrading caricatures of Black people created by white people for entertainment.

Kerson and his defenders decried the students' efforts to have the mural removed as an attempt to silence an artist and erase a depiction of the horrors of slavery.

Kerson, who has lived in Québec for the past 20 years, said in a Zoom interview that he views his characters as "dignified" and the mural as a "quite mild-mannered" depiction of slavery. He would paint the same mural again, he said.

"I don't feel like I'm responsible for people that have reactions to it," Kerson said. "The piece is open to everybody, and it speaks to everybody equally."

This isn't the first time Kerson's work has caused contention, as the Valley News reported in February. His mural at the State Office Complex depicted naked and partially clothed Indigenous people. After several people complained, some workers took to covering it with a sheet during meetings. That mural was removed in 2011 when the complex was renovated.

"I don't feel like I'm responsible for people that have reactions to it." Sam Kerson tweet this

Jefferson said that, in the summer of 2020, around the time Davis and Urbanowski circulated their petition, she separately approached the VLS dean to encourage removal of the mural.

Kerson initially thought the controversy might evaporate after he objected to the mural's removal, he said. When that didn't happen, lawyers began contacting him.

Kerson's lawyers argue that preventing viewing of the mural equates to modification under VARA. Judge Crawford noted in the February hearing that his review of previous VARA cases revealed none that addressed this specific issue of a building owner wishing to conceal a mural from view. 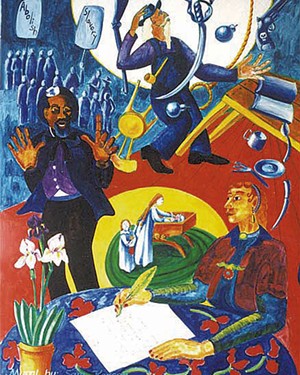 New York-based Steven Hyman, one of Kerson's attorneys, made the same observation. "There is no case law on this issue," he said. "You're in some uncharted waters."

In the short term, while the mural's ultimate fate is hashed out, Kerson's attorneys want it covered with a movable curtain, while the VLS attorneys argued for going ahead with their construction plans for a permanent cover. The judge has yet to rule on a preliminary injunction to decide this debate, and it may be months before the underlying claims are resolved.

Among the law school's representatives is Justin Barnard of the Burlington-based law firm Dinse. "The law school's mission is to educate students in a diverse community," he said in a phone interview. "And it feels that having this mural on display or accessible is, at this point, counter to that mission."

Barnard and Karen McAndrew, another Dinse attorney, said that VARA does not dictate that an artwork must remain viewable, and requiring the school to keep the mural visible would violate VLS' First Amendment rights. In their view, just because the school welcomed the artwork and its statement in the past doesn't mean it must remain committed to displaying those views.

"Speech is not static. Artwork is not static," Barnard said. "And the social context plays a big role in determining how the values expressed in artwork are received ... It's been 30 years since this work went up. It's reasonable that an institution might feel differently about the speech embodied in it."

Kerson's team filed documents indicating support for the mural, including a Change.org petition against its destruction that received nearly 1,000 signatures and an email that a self-identified Black student sent to Urbanowski, Davis and others, objecting to their petition. The email was forwarded anonymously to Kerson, and it's unclear whether its sender knew his words would be used in a court case. He did not respond to an email requesting comment. 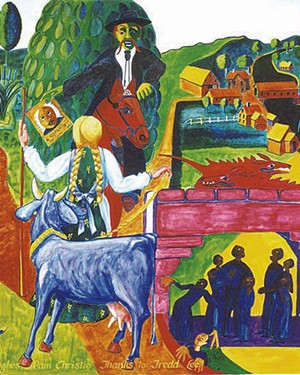 Kerson has doubled down on the stylistic choices of the mural in a series of new paintings posted to his website. He described them as a journal of the events since July and his fears for the mural's future.

Many of these new images depict a Black man as the mural's antagonist, pointing his finger in Kerson's face and, in several images, painting over the work with white paint or spraying it with the words "White Savior." This figure has many of the same exaggerated facial features as those in the mural.

In one of the paintings, the figure appears to be saying, "Mr. Kerson, me and my friend April, we do not like your Underground Railroad," suggesting that he represents Davis, one of the two students leading the removal campaign. Kerson's new paintings do not appear to depict the other student, Urbanowski, a white woman. Davis and Urbanowski declined to comment on the case or Kerson's latest paintings.

"These new paintings seem to suggest nothing so much as an unwillingness to listen to any criticism of his work," said VLS attorney McAndrew, "or to give thoughtful consideration to why people are offended by the manner in which his artwork portrays Black people and Black bodies ... He turns around and disseminates a series of paintings belittling the legitimate concerns raised about his work by Black viewers and singling out at least one of the Black students who has voiced those concerns."

Kerson denied that the figure in question is intended to represent Davis. "We don't want to antagonize Jameson," he said. Instead, he described the antagonist of the new paintings as an imaginary character named Zebulon Vance, which is also the name of a 19th-century Confederate leader and North Carolina politician.

Then, before he was asked, Kerson denied Seven Days permission to reprint his new works.