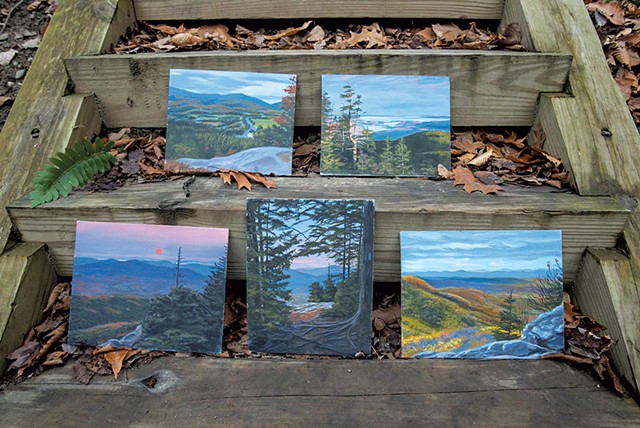 Before setting out on an end-to-end trek of the Long Trail, the 273-mile path that runs the length of Vermont, a hiker undertakes a few routine activities. These include loading up on dry food, breaking in a pair of boots and mapping out an approximate route.

Then there are the additional preparations that were required of Rob Mullen, an artist and outdoor adventurist from West Bolton who walked the full trail this fall.

Mullen, 64, had to make space in his backpack for oil paints, a palette and acid-free boards — materials he used to make landscape paintings from the Canadian border to southern Vermont. He had to devise a system that allowed him to carry paintings in his pack, ensuring the plein air works of art, still wet when he hiked with them, didn't touch each other. (He got a major assist from his wife, Bonnie, on the setup.)

Mullen has wanted to hike the Long Trail end to end for many years; he's had a connection to the nation's oldest long-distance walking path since childhood. Before the Long Trail was rerouted in 2015, the path crossed the land where he grew up with his parents — a high school science teacher and a registered nurse — and three siblings. His grandfather, acclaimed New York City letter artist Jerry Mullen, had purchased the property in 1946. It sits at an elevation of 1,200 feet.

The proximity of the path to Mullen was a factor in his not hiking the whole thing until this fall. For two decades, the call of wilderness expeditions propelled Mullen far from his home state. He's made annual paint-and-paddle trips through remote regions of North America, exploring locations in Alaska, Labrador and the Northwest Territories. The expeditions integrate Mullen's interests in landscape and wildlife art and the natural world.

This year, due to coronavirus travel restrictions, Mullen was unable to take his planned canoe expedition on the Thelon River across northern Canada. This inspired him to think of a trip closer to home.

"I was stuck in Vermont," Mullen explained on an October afternoon at his house. "It's a wonderful place to be stuck, [but] I still wanted to do a trip. This was a perfect opportunity to do the Long Trail."

His hike, from mid-September to mid-October, was a fundraiser for the Vermont Wildlife Coalition and the Green Mountain Club, the nonprofit that manages the Long Trail. (Mullen serves on the board of the Vermont Wildlife Coalition.) Though Mullen's hike is finished, his fundraiser continues until December 1. For a donation of a nickel a mile ($13.65), a donor receives a high-resolution image of a Mullen Long Trail painting; a $1 a mile ($273) garners an original trail painting. There are several donation options within that range, as well.

"One of the things I'd really like to do, career-wise, is start painting more of Vermont." Rob Mullen tweet this

Mullen found his way to a profession in the arts through biology, his major at the University of Vermont. His student lab drawings of slime molds, spider genitalia and other specimens attracted the notice of his teachers, he said. Mullen went on to work in biological illustration and then advertising in New York City. His wilderness painting, in particular the Long Trail project, fits into a larger artistic goal.

"One of the things I'd really like to do, career-wise, is start painting more of Vermont," Mullen said. "I thought this was a good way to kick that project off."

His plan, which in retrospect he called "overly ambitious," was to make a painting a day. But in the early days of his north-to-south route, the onetime track and cross-country athlete confronted a circumstance he didn't anticipate: sucking wind.

Starting with the most rigorous part of the trail and carrying a 60-pound backpack, whose contents included an ax and a saw, left little energy for painting at the end of a hiking day.

On Day 3 at Jay Peak, Mullen dumped gear and lightened his load to about 40 pounds. He whittled weight in part by unloading tubes of paint.

"My painting kit just became a target of my ire for a while," Mullen said. "Eight pounds is [significant] when a pound or two makes a difference."

He kept his palette and brushes and used squibs of paint on the palette to make trailside paintings. Mullen fit the palette and 8-by-10-inch boards into a zipper pocket in the top flap of his pack. In a range of blues, greens and golds, he captured the soft light and changing colors of fall in high-altitude Vermont. (Later in the hike, when he was fitter, he carried his full painting kit again.) 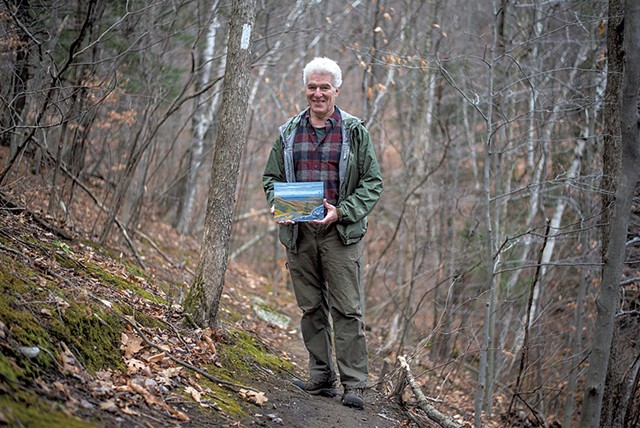 Qualities in the forest that caught Mullen's attention, the signs of a changing ecosystem — color, smell, light, warmth — had as much or more to do with altitude than his north-south orientation on the trail, he said.

"You're up 3,000 feet and [then] plunging down ... and you've walked into a different forest," Mullen observed. In this up-close encounter with Vermont, he found his home state to be, by turns, "very inviting" and "otherworldly."

Mullen painted Belvidere Mountain one evening while he cooked macaroni and cheese and mashed potatoes for supper. He painted the mountain again, in new light, the next morning at breakfast time.

At his first camping spot, Shooting Star Shelter, Muller got down to work and painted a dolomite he spotted nearby. He put the painting on a shelf in the shelter to dry. When a northbound through-hiker from New Jersey showed up at the shelter, he saw Mullen's painting and the nearby boulder and made the connection.

"I love rocks!" the hiker told Mullen. The artist sold his first painting that first night, giving his fellow hiker a deal at $250.

"I thought, This trip is going to be great!" Mullen said.

While the initial days of the hike presented an aerobic challenge, by the end of the trip the artist was in the best cardio shape he's experienced in 30 years, he said. His resting heart rate was 48 beats per minute.

"I walked up Stratton Mountain, and I didn't feel it," Mullen said, referring to the 3,199-summit near the southern end of the trail.

By that point, Mullen was pretty much done with the painting part of the trip. "The last 50 miles, I just wanted to get home," he said. "I was ready to go back to my bed." He "cranked out" that 50 miles in two and a half days.

Reflecting on his journey 10 days afterward, Mullen described the relation between his art and his hike.

"Painting on-site makes you feel a little more connected to a place," he said. "And I think walking it on your own two feet does the same."

The original print version of this article was headlined "Homeward Bound | Rob Mullen hikes, and paints, the Long Trail"