It goes without saying that Johnson, Vt., bears no resemblance to New York City, and its Pearl Street most certainly is not Fifth Avenue. Yet those who pass by Vermont Studio Center after dark are currently privy to a window display rivaling those of any Big Apple department store.

It's a view of Matt Neckers' installation "Cataclysm: Familiar Robots & Their Animal Kindred" through the street-facing glass wall of Red Mill Gallery. Visual arts program manager Kristen Mills keeps the lights on at night — all night — for the benefit of passersby. From a distance, the riotously colorful exhibition is a visual rejoinder to the deep freeze outside.

The exhibit merits a closer indoor look, as well. Take note: Given the current social-distancing strictures, daytime visitors to the gallery must email to make an appointment.

Neckers has assembled a floor-to-ceiling collage from salvaged pieces of metal and wood that covers two walls. He painted the metal sheets of various sizes red, gold or blue, left them the original silver, or adorned them with repetitive patterns. Affixed to these rectangles are simple wooden silhouettes: house, cloud, robot, four-legged critter, army tank, boat, airplane, boat, helicopter.

"Cataclysm" presents an unexpected and unsettling juxtaposition: militaristic symbols as wooden, puzzle-like pieces arranged with the cheerful spontaneity of a kindergarten classroom. Every one of these pieces is attached to the metal with a magnet, and, yes, viewers are welcome to move them around. Think playfully nihilistic refrigerator art. 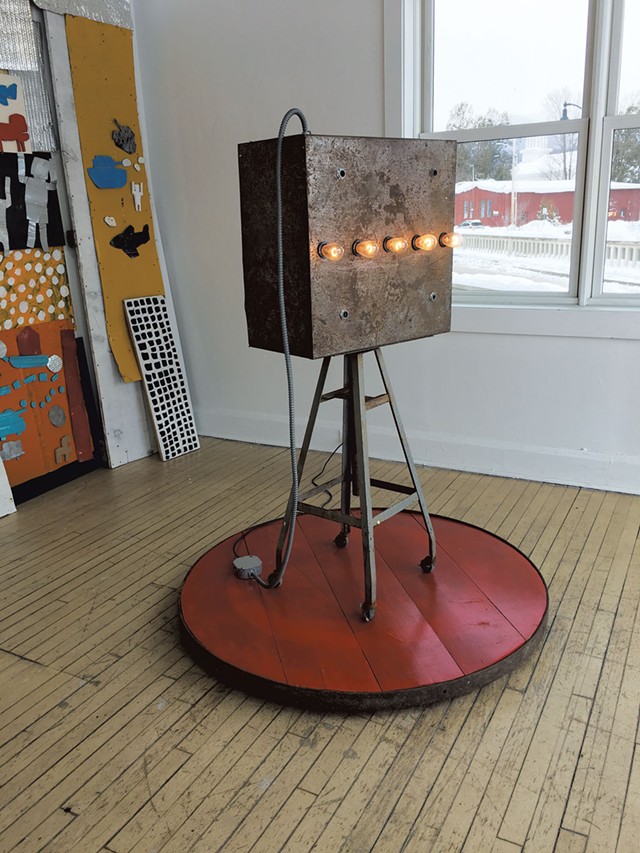 The installation calls to mind kiddie cartoons that embed darker themes for the grown-ups. With this overlay, it's hard not to read the robot shapes with their arms bent upward as humans in a posture of surrender.

"We're kind of in a place where a lot of people are acting like robots," Neckers suggested in a recent phone call. "They're not thinking for themselves."

The exhibition isn't entirely about subversive messaging, though. Two stand-alone structures in the gallery seem to convey nothing more than the sheer joy of turning junk into ... something else.

To one side stands an assemblage of duct pipes, both cylindrical and the vermicular flexible ones, as well as other post-utilitarian objects that might be found at a construction site or in a dusty corner of one's basement. An electric light fixture carefully attached to the largest cylinder — and plugged into the wall — belies the ostensible randomness of this arrangement. Indeed, Neckers said he gave it all careful thought.

Intentionality is more evident in the other construction. A circular red-painted base — an old wagon wheel filled with wood, according to Neckers — supports a four-legged stand, which in turn supports a rusty metal box of indeterminate origin. Five round, illuminated light bulbs line up on one side, giving the structure a sense of purposefulness, if not effectiveness. To anthropomorphize, it looks cute and earnest, a theatrical-lighting understudy.

Neckers, 50, is a multidisciplinary artist and educator whom local cognoscenti might recognize as the creator of the Vermont International Museum of Contemporary Art + Design. That's the rather grand name for a tiny mobile gallery in a reclaimed '60s-era camper. It's currently "hibernating" in a shed at Neckers' home in Eden, he said.

Born in Michigan, Neckers grew up "everywhere," he said, before landing in New York City for some years. Along the way, he studied painting at Evergreen State College in Washington and earned a master's in art education at Saint Michael's College. He and his wife moved to Vermont in 2003; the couple has two children, now 14 and 11.

Neckers has become fluent in a variety of mediums, from sculpture to photography to digital media. All of them serve him well in his current position, teaching creative media art and design at Green Mountain Technology and Career Center in Hyde Park. Over the years, he's taught at several schools and garnered multiple education awards, always juggling teaching others with making his own art.

The mobile museum necessitated working small for several years, as did a project he created for a 2019 Fleming Museum of Art exhibition: an interactive mini museum inside a 1940s refrigerator. "But then I built a new, bigger studio," Neckers said. "Working small is a bit like a sketchbook for me; I made hundreds of pieces, and the ones I really liked, I could make larger."

After the pandemic arrived in Vermont, Neckers began to carve figures — many of uncertain species — from scraps of wood. He was determined to make one every day, "including the day I cut myself and had to get five stitches," he said. "The wooden figures were a response to how I was feeling each day and to what was going on in the world."

He also made rockets, vintage-looking metal constructions of questionable launchability supported by wooden scaffolding. Neckers' work was featured last year in an exhibition titled "Vermont Utopias: Imagining the Future" at the Bennington Museum and at an outdoor sculpture show at the Kent Museum.

What Neckers calls his "cataclysmic ideas" reverberate in the current exhibit — again, a reflection of global events. "This is a tough time to be alive," he said.

Despite his teacher cred, Neckers' goal is not didactic. "I like people to reach their own conclusions," he said. "I like the accessibility and the element of surprise.

"This is a cliché," Neckers concluded, "but I do really make work for myself and then just hope people will see it and like it."

"Cataclysm: Familiar Robots & Their Animal Kindred" by Matt Neckers, on view through March 31 in the Red Mill Gallery, Vermont Studio Center, in Johnson; Neckers gives a virtual talk on Thursday, February 18, at 7 p.m. Email galleries@vermontstudiocenter.org to schedule an in-person appointment.