Artist and Teacher Susan Smereka Shares the Joy of Printmaking 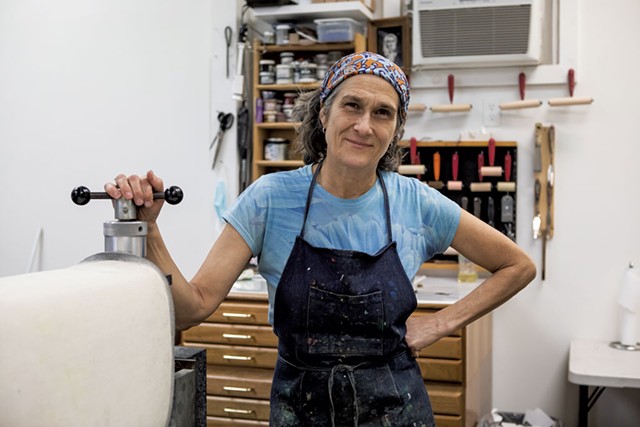 If you were a small snippet of paper, your humble life would not be wasted in Susan Smereka's studio. She would find a use for you. Most likely, you'd be a piece of a hand-pulled monoprint that she had cut up and organized, more or less, in a tray according to color. If you were very lucky, you'd be assembled into an abstract collage or maybe an artist book, and the artist might consecrate you with stitches.

Smereka, who lives in Colchester, makes all these things in her Burlington studio. She also teaches others how to make them — prints, collages, books, cards and other paper-based arts. "My passion is doing monotypes, but I also teach dry point and linocut," she said during a studio visit. "I get a few other people in here to teach, too."

"Susan helps shape an idea or goal into a day of serendipitous creativity." Ady Dooman tweet this

Smereka and her partner, sculptor Kevin Donegan, established their shared space at 4 Howard Street in July 2020 and named it new new art studio — lower case intentional. The name is an oblique nod to now-closed New City Galerie in downtown Burlington, where the two first met. Initially Smereka was teaching at other locations, including Two Rivers Printmaking Studio in White River Junction and at Burlington City Arts, as well as teaching art and humanities for Home Base, a Queen City social services organization for developmentally disabled adults.

About a year ago, the couple decided to rebrand their space with a new logo and new sign outside the door.

"The name is integral to a place," Smereka said. "In part it's being able to tell people where to go — this is a confusing building."

A sturdy metal printing press, with a 2-by-4-foot press bed, commands attention in the center of Smereka's side of the studio; worktables, flat files and a sewing machine table surround it, fortress-like. To one side, shelves hold inks in myriad colors, and brayers — handheld tools for rolling ink onto a printing plate — hang from a pegboard.

Smereka said she picked up her hand-built, secondhand press just as COVID-19 arrived — that is, the week the governor shut down almost everything in Vermont. The timing was fortuitous: At least the artist could spend the pandemic isolation period printing to her heart's content. 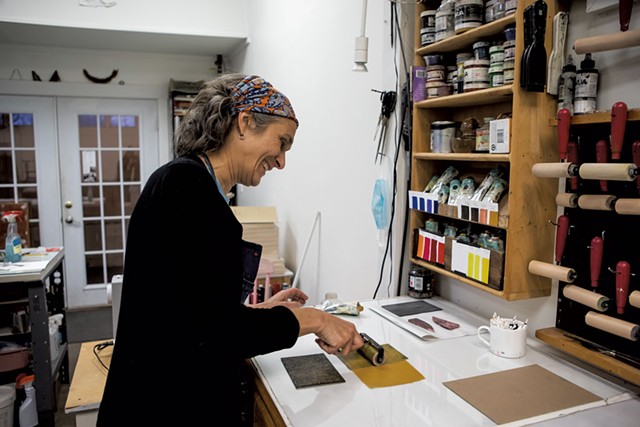 In September 2021, Smereka began offering workshops at new new art studio. Now, she's teaching roughly nine hours a week, plus occasional weekend intensives. That does not include the time required to run the enterprise in her own space. "There's a lot of preparation in owning a small business and marketing," she said. "I've just about got 2023 [classes] ready, so I can start thinking about my own work again."

Smereka's students come with varying degrees of printmaking know-how — including none — but uniformly praise her workshops and teaching style.

"Susan helps shape an idea or goal into a day of serendipitous creativity," wrote Burlington artist Ady Dooman by email. "She is a productive artist who is also a gifted educator. She teaches with joy and patience."

Dooman had no prior printmaking experience when she signed up for a monoprinting class. Since then, she wrote, "I've enjoyed a card-making workshop and several days of open-studio time in new new art studio. Art students benefit not only from Susan's instruction but also from observation of her works in progress."

Jim Forbes, also of Burlington, was primarily a painter before taking an intro to printmaking class from Smereka last winter. He noted that he appreciated her participation as a maker. "Susan works right alongside you on her own pieces as a way to gently demonstrate her process," he wrote. "It was a great hands-on experience. She threw us right into 'doing' and was good at sharing and explaining as questions arose."

For her part, Smereka gets something in return from her students. "Even though I've taught the same class over and over, I always learn something new — techniques or ways of doing things I hadn't thought of before," she said.

Smereka herself didn't come to printmaking or even to art as a profession right away. She enjoyed "doing little projects" as a child, she said, and art was her best subject in school. But, she explained, "I came from a family of scientists and mathematicians. I always thought I should find something other than art."

Born in suburban Toronto to an American mother, she has dual Canadian and U.S. citizenship, a status that perhaps contributed to her wanderlust in younger years. She traveled to Southeast Asia, India, the Philippines, Thailand and around Europe. "I started riding my bike in France and Canada," she said. Eventually, she settled long enough to finish a BFA at Concordia University in Montréal. 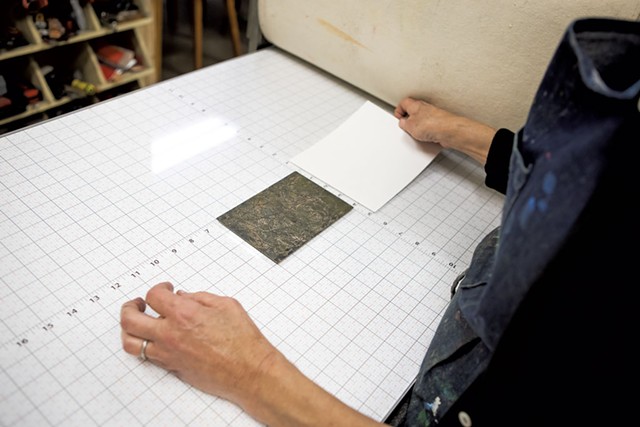 A relationship brought Smereka to Vermont, and she lived in several towns around the state before landing in Burlington. "I thought about leaving Vermont a couple of times, but it's an amazing place," she said. "I like the landscape, the mountains. And I love Burlington. I've been here 10 years."

Smereka had focused on painting and drawing at Concordia and used the woodshop for certain projects. "So, I was always exploring other media," she said. "When I came to printmaking, I was living in Rochester [Vt.], and Two Rivers [Printmaking Studio] opened up. I took a few classes and just found myself there a lot."

She was drawn to monotype printing for its painterly qualities. "I took other classes there, but the monotype just resonated with me," she said. "Then they started asking me to teach down there. It was something I just gravitated to."

Smereka has augmented her own education with residencies or internships at the Vermont Studio Center, the Center for Book Arts in New York City and the San Francisco Center for the Book. Her interest in book art has led her to repurpose vintage volumes, replacing their printed pages with blank ones or using the printed text in her abstract collage pieces and prints.

Her collection of liberated pages is stacked on shelves in her studio. "I just love the color of old book pages," Smereka said. "I have a hard time throwing that stuff away."

During the early pandemic months, she began to clean up the studio, "finding all this accumulation." For example, she turned up scraps of fabric from old shirts used in previous projects. "Soon after that, I started making little pieces," Smereka said of her mixed-media assemblages, which often incorporate sewing. "I never thought I'd be a collage artist, but here we are."

Teaching her craft to others "has been really rewarding because I love coming to the studio, and now it's what I do," she said. "It changes my thinking, my way of being; I'm now professional at this. I'm incredibly blessed and happy that it's working."