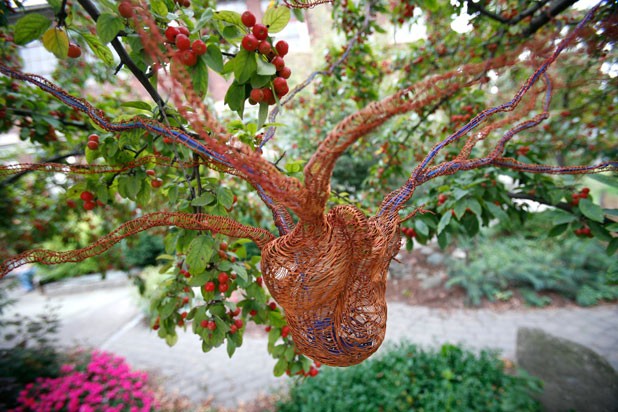 This year’s Art Hop was representative of “true Vermont style — raw and exuberant,” says juror Sarah Chaffee. The hundreds of works on display in more than 50 venues were also “wildly varying in quality,” adds the director of the McGowan Fine Art gallery in Concord, N.H.

It’s hard to quarrel with Chaffee’s overall appraisal. The six pieces she chose as prize winners do exhibit refinement and skill unmatched by most of the sculptures, paintings and installations in a sprawling show that prides itself on including all comers. However, only one of Chaffee’s choices can aptly be described as raw or exuberant.

That would be Michael Gervais’ “Retail Revenge,” the top pick in the Hop’s public-art category. Drivers or bikers on Pine Street may notice that this zigzagging, symmetrical steel structure in front of New World Tortilla shifts shape as it’s approached and passed. But they’ll have to dismount or climb out of their cars to see the scattering of shoes at its base, in what may be an allusion to a certain shoe-centered incident in Baghdad late last year.

Chaffee’s second- and third-place finishers — “Heart Nest” by Rebecca Schwarz and “Under Wire” by James Teuscher, respectively — are both more subtle than sprightly. In fact, the scale and location of both make them easy to overlook.

Schwarz’s elegant, rust-colored wire-and-tubing construction is camouflaged by the branches of the two trees from which it hangs in the SEABA Art Park at 382 Pine Street. The heart-shaped pouch at its center does infuse the piece with the “very warm, domestic” association that Chaffee says she found appealing.

“Under Wire,” which is roughly 2 feet long and 1 foot tall, is affixed to the exterior wall above the entrance to Vermont Community Access Media at 208 Flynn Avenue. Viewers will want to touch Teuscher’s “tantalizing” piece, which has the shape of a breast, but they won’t be able to, Chaffee points out, because “it’s just out of reach.” She also admires “Under Wire” for its clever placement, noting that the success of a public art work hinges on “picking an appropriate place.”

Size can matter a lot, as well. And in this regard, many of the Hop’s public art pieces don’t measure up.

Placed to be seen almost exclusively from moving vehicles, the works arrayed along Pine Street are simply too small to make much of an impression on drive-by viewers. That’s especially unfortunate in the case of Randy Abar’s “Irie,” which would put smiles on commuters’ faces if it were 10 or 15 feet tall instead of 5.

Back indoors at the Soda Plant, “Three Days in September,” the meticulously stained and varnished, striped wooden piece that won first prize in the juried show, stands out for its elegance and sheer professionalism. Chaffee acknowledges that she’s predisposed to favor minimalist as well as colorful works, and this autumnal composition by Robert Hitzig (co-owner of The Lazy Pear Gallery in Montpelier) plays to both her preferences.

So does “Deer,” a melancholy, velvety gouache by Frankie Gardiner, the second-place selection among the scores of entrants in the juried competition; in it, the titular animal seems to emerge, white and ghostlike, from a wholly red background. “Faith,” Chaffee’s number-three choice, surprises viewers with the dainty use artist Catherine Ward has made of extruded porcelain. She fashioned a woven white tunic that’s simultaneously ethereal and unassuming.

Alan Alejo’s “Barry” deserves recognition even though it failed to make Chaffee’s list of hits. It’s a king-size pointillist portrait in the manner of Chuck Close, with 13,500 colored gelatin caps resolving themselves, at a distance, into the face of the 44th president.

Props are also due the pen-and-ink drawing by Anne Marie Richardson entitled “Standing Stones.” Her shaded monoliths set in a snowy landscape attract attention with their quiet beauty amid the Soda Plant’s razzle-dazzle. Similarly, a set of watercolors by Ayn Baldwin Riehle makes a visit to the Maltex Building mandatory for anyone who appreciates lacy, impressionistic renderings of the interplay of ferns and sunlight.

Though the 2009 Art Hop weekend is officially over, viewers can take in the juried show and the outdoor sculptures for the rest of the month.