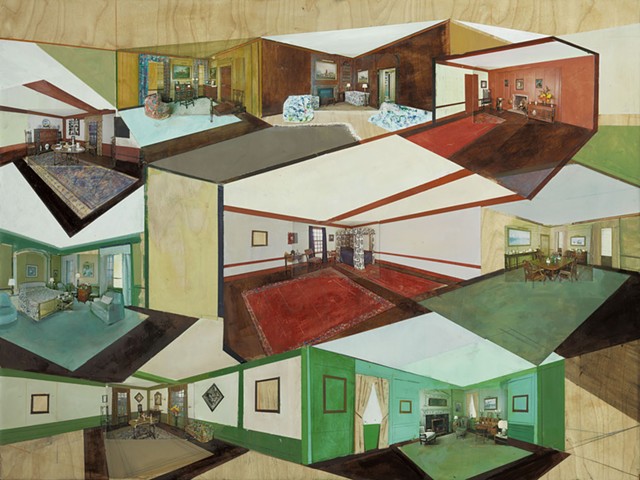 Visitors who think they're going to see the dogs at "William Wegman: Outside In" at the Shelburne Museum are in for a surprise. A pleasant one, most likely.

To be sure, plenty of the artist's famous Weimaraners appear in the exhibition in various guises, captured in 20-by-24-inch Polaroid color prints. According to Wegman, the canines are diligent and hardworking models who patiently tolerate all manner of indignities. Consider the pooch draped completely in what appears to be a floral shower curtain ("Rain Coat," 2004), or the one in a pile of knotted ropes ("Tangled," 1998), or — in perhaps the greatest display of forbearance — the one with various doodads atop the head and hung on the snout ("Daisy Nut Ball," 1994).

Thing is, Wegman, now 75, originally trained as a painter, at the Massachusetts College of Art and Design in Boston and then at the University of Illinois at Urbana-Champaign. Shortly after he received his MFA, painting was inconveniently declared dead.

Wegman moved to Los Angeles and, in the 1970s, took up video, becoming known as a key figure in West Coast conceptualism. He resumed painting again in the '80s and practices it to this day. The Shelburne Museum exhibition presents a number of pieces from the artist's personal collection, most of them relatively recent.

Even as he continued painting, Wegman also took up Weimaraners and photography. After four decades of posing his pups; producing books, calendars and other ephemera; and appearing on television, it's no wonder he is saddled with a reputation as "the dog artist."

Luckily, he doesn't mind. As Wegman told Shelburne Museum assistant curator Carolyn Bauer in a recorded interview, "I'm thankful for any audience I have ... I was certainly never asked to go on a talk show to discuss my paintings, but with the dogs and also with my video work, that is what happened."

The show's title, "Outside In," refers not to bringing Weimaraners into the studio — though perhaps it could — but to Wegman's long-standing relationship with the natural world. Born in rural Massachusetts, he has maintained a home in Maine for decades. Despite his years living in LA and New York City, Wegman is a son of New England, influenced by both a lifestyle of hunting, fishing and camping and the region's transcendentalist legacy. 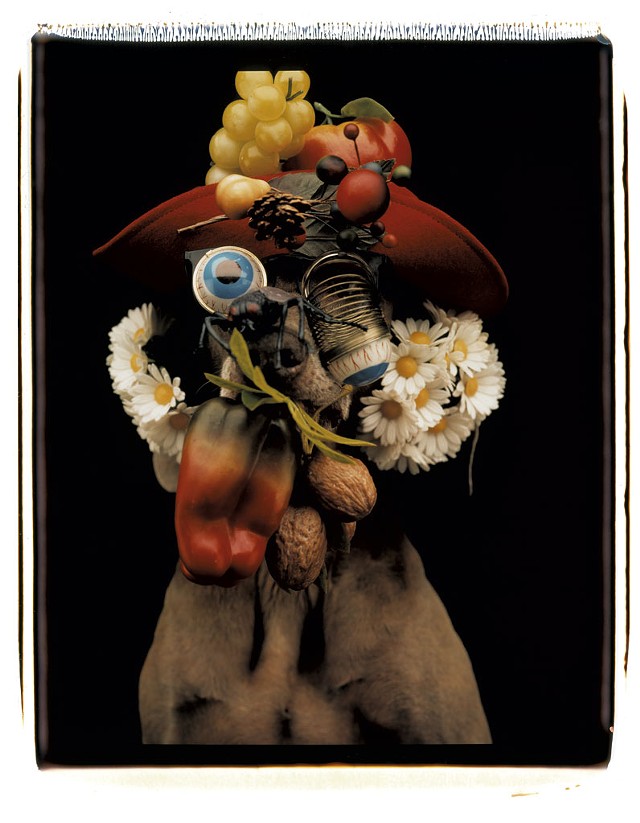 This influence manifests in his work with characteristic wry humor. In the photograph "Camp Set" (1997), two Weimaraners and a human with an inserted dog head are all clad in plaid and posed at a woodsy campsite. It could be an ad for L.L.Bean — which is why the "camp" in the title is undoubtedly a double entendre.

Wegman's Field Guide to North America and to Other Regions (1993) is an outsize, limited-edition artist book whose large pages borrow from Boy Scout instruction manuals while also featuring a photograph of a nearly nude woman poised to scamper into the forest. His table of contents consists not of text but of watercolor pictograms; the book's container is a birchwood box.

The paintings that might most surprise viewers of this show are 21st-century renderings that incorporate cubism, abstraction and, most prominently, "readymades" in the form of collaged modern postcards. Among these are two works that use paint to expand on scenes in replica vintage postcards from the Shelburne Museum collection. Wegman augments "Spiral Stair" with grand flourishes and curlicues in a range of green hues. "Collected Rooms" builds cubist planes and angles around postcard pictures taken in the museum's Electra Havemeyer Webb Memorial Building and Prentis House.

The exhibition's largest work by far is a three-panel painting titled, somewhat ironically, "The Great Indoors." Dominating the gallery's back wall, the 2013 piece depicts an enormous, imaginary room whose rectilinear planes swoop back to a point of near disappearance; it is an extreme, architectural exercise in perspective. But the brightly colored room also incorporates "windows" — that is, six collaged postcards — that offer views onto other worlds: an elk in a northern wilderness, a blue pond, a cluster of rocks in a desert. Only one affixed postcard, of an orange side chair, seems to suggest a more mundane function.

Wegman reiterates the "picture window" concept in other, smaller works, as well. 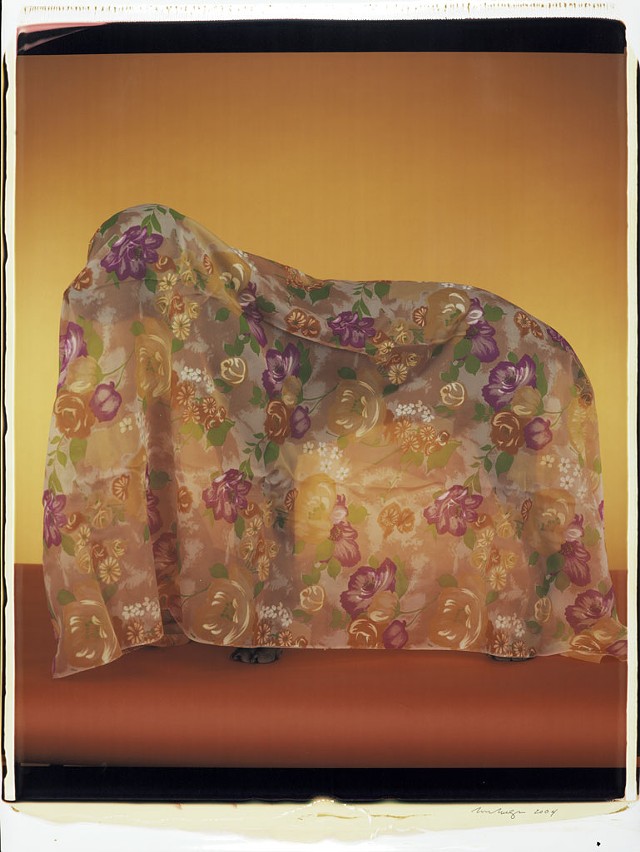 The artist's earlier paintings and non-canine photographs help to build a more comprehensive understanding of his creative arc. But it must be said that, in the end, Wegman's Weimaraner photographs steal the show, though the ones that stand out aren't necessarily the whimsical costumed or camouflaged canines.

In his interview with Bauer, Wegman said, "This idea has been central to my work for quite a while now, that things are one thing and then they become something else." Nowhere is this more evident than in his photographs of dogs that don't look like dogs. The remarkable triptych "Lake Shore" (1999), which greets visitors as they enter the gallery, appears to depict a set of round hills against a hazy blue and green backdrop. In fact, the "hills" are dogs' bodies in curled-up sleep position. A viewer has to get close to recognize the sheen of fur. The tight composition of "Lake and Valley" (2000) makes four dogs' sloping backs into steep mountainsides.

Whether Wegman is anthropomorphizing his Weimaraners or presenting them as something "other," he has cultivated a living, breathing subject as reliable as, well, man's best friend. "I think as long as I have dogs I'll continue to come up with new ideas," he wrote for the exhibition text. "I don't think I'll ever be bored by this, and I'm certainly not boring them."

The original print version of this article was headlined "To the Dogs and Back | "William Wegman: Outside In," Shelburne Museum"