A Hannah Morris painting is full of trickery. First of all, her creations are both paintings and collages, and it's hard to tell where one leaves off and the other begins. Though they do fool the eye, her pieces are not trompe-l'oeil as we usually understand it; her narrative tableaux are real-ish but decidedly not realistic. That is, unless a viewer chooses to believe that a human body can have a bird's head.

In her current solo exhibition, "Waiting to Happen," at Northern Daughters gallery in Vergennes, Morris also asks viewers to accept that the ground we walk on can be salmon-pink; that figures can appear in both color and black-and-white in the same scene; that dimensionality doesn't have to play by the rules. Logic is in scant supply here.

These dozen or so gouache-and-collage works on board charm us in the way of the magic realism we remember from children's books. Yet they seem to impart secrets, social codes and states of being that only adults can grasp.

In other words, a Morris creation invites viewers to see and feel whatever they want to see and feel. She essentially says so right in her artist statement: "I want to trigger a viewer's memory, for I believe that vision is shaped by thousands of remembered moments."

Perhaps "Waiting to Happen" offers us glimpses into Morris' own cache of memories. The artist was born in southern Vermont and moved to central Vermont in 2010. Between those two points, she studied art, writing and documentary studies at Bates College in Maine; lived for six years in South Africa, where she earned a master's in narrative illustration and designed an award-winning children's book; and spent three years in New York City working as a graphic artist for Whole Foods Market. Morris' artist residencies over those years included one in Bahia, Brazil, which may have influenced the sun-drenched palette of some of her works. 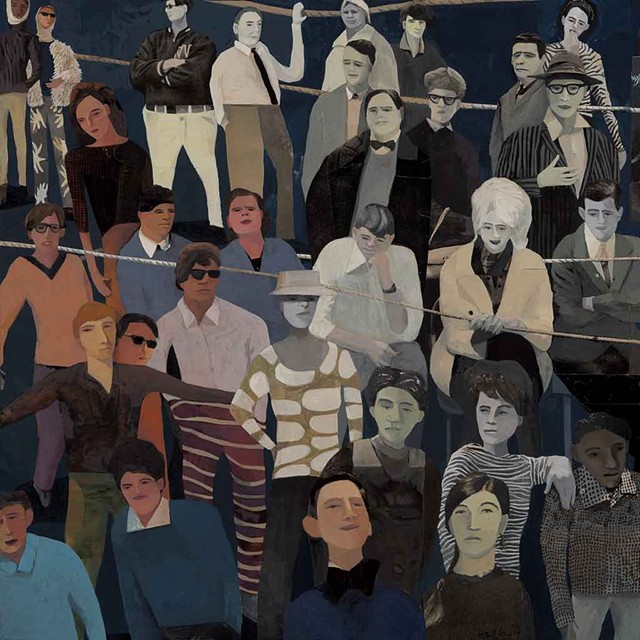 Exposure to the life and climates of other continents leaves a strong visual impression, to say the least. Morris infuses a vague sense of tropicality, of not-American locales, into her work, such as the bright urban street scene "Late Afternoon" or the turquoise water in the quadriptych "Enclave." But nothing is explicit.

Other images offer no hint of place at all, just groups of people in ambiguous settings. In the somber-hued piece "In the Queue," lines of people file between guard ropes like those at airports and large concert venues. All these figures face the viewer; they are literally waiting for something to happen — but what? The narrative is mysterious. The sense of interminable delay, familiar to all of us, is profound, yet these patrons look calmly resigned.

The figures fill the entire picture plane of "In the Queue"; what we can see of the background is deep blue. The only other color appears on the faces and drab clothing of individuals in the lower left of the square image. A viewer is left to scan this sea of faces closely. Who are these people, where are they going and what are they looking at?

Individuals in Morris' works seldom seem to interact; even the sunniest scenes are overlaid with a lonely-in-a-crowd poignancy. The promise of togetherness is tainted by otherness. In "Latecomer," a group of people — some visually united by black-and-white-striped clothing — stands or sits around or on an outdoor table. The painting's title suggests that they, too, are waiting. In the upper-left quadrant, a woman peers out a window at this ensemble, both her hands against the glass in an unreadable gesture. Is she the latecomer? Is she unable to join the group?

In "High Speed Rail to Your Future," a crowd of people mills about a peach-colored platform before a sleek, monstrously huge train. It's not clear whether these travelers have disembarked or are about to get on, but again there is that sense of waiting.

In "Tree Huggers" — where the avian-headed humans appear — people have definitely arrived ... somewhere. The surreality of the place, with its mishmash of botanical forms and an incongruous swimming pool appears to strike the visitors as more wondrous than frightening. It's like a theme park where one suspends disbelief in the spirit of adventure.

Morris' training in graphic design and illustration strongly informs her work. Figures are flat, almost like paper dolls. Perspective is, too: Images are stacked, while ground and sky are often expanses of opaque color. A straight line separates beach from sea or pool.

Along with this linearity, Morris sometimes subverts expected dimensions. In "Horseback Vacation," for instance, a roan horse dwarfs a tiny ensemble of humans in grayscale; other humans and animals in the same picture are proportionally correct, while one couple, holding hands, towers over the others.

Morris' vignettes suggest a psychological tension between anticipation and simply being in the moment; that condition parallels her endlessly fecund process of finding and building on found images. Some viewers might find her works static, bleak or unsettling; for others they may suggest promise, even liberation. It all depends, as Morris posits, on one's own archive of remembered moments.

The original print version of this article was headlined "Committed to Memory | "Waiting to Happen: Hannah Morris," Northern Daughters"