Art Review: 'Vox Populi' Asks How 'the People' Are Faring 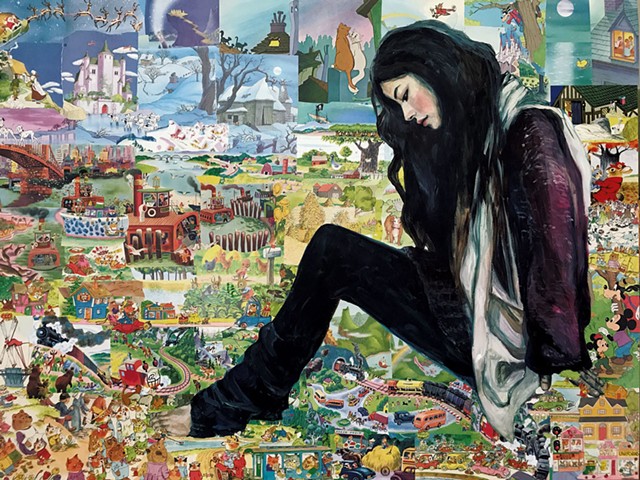 In journalism, the "vox pop" interview — short for vox populi, or voice of the people — places the reporter on the street, asking passersby their thoughts on a particular subject. The method is meant to suggest authenticity, an unscientific but real barometer of what "the people" know or believe, or how they are faring.

So, how are the people faring? The exhibition "Vox Populi," which opened last weekend at Burlington's BCA Center, asks six Vermont artists to answer that question through works of portraiture or other human likeness. The elephant in the room, mentioned nowhere by name, is President Donald Trump. But exhibition text amply addresses the volatile U.S. political climate before and after his election.

"'Vox Populi,'" claims the curator's statement, "aims to capture the character and inner psyche of people through contemporary portraiture." The viewer is left to work out how, "despite sharing divergent perspectives and voices," the artists "find commonality through our shared image." In this pointed appeal to humanity's lowest common denominator — human features — the show recalls MoMA's groundbreaking and overtly moralistic "The Family of Man" photography exhibition in 1955.

Questions quickly arise. Both Johnson-based Mack and Putney-based Wilson present sculptural works featuring anonymous faces and figures. Does artwork that merely includes a face, a head or heads, constitute portraiture? How are we supposed to reckon with "facelessness"?

With the powerful "Egress Access," Mack joins a lineage of artists using the symbol of the spade to denote slave labor and its ongoing legacy of racism and race-based violence. Unlike Alison Saar's "Spade's a Spade" or David Hammons' "Spade in Chains," however, Mack's 52 spades — each forged into evocative, sometimes agonized faces — reject outright bleakness. Instead, he has arranged his spade-people into a mandala-like circle over a tight assemblage of colorful wood, suggesting that visual coherence, color and symmetry — as shorthand for beauty — can coexist with traumatic histories.

Wilson similarly uses anonymity to gesture toward deep history and archetypal (or confoundingly vague) embodiments. Earthy, unglazed and unspecific, her works grasp at timelessness through a lack of defining features. The four terra-cotta torsos of her "Guardian" series appear expectant, if not a little lost. In the stoneware "Seekers," made in collaboration with Koloseike, disembodied hands reach toward a massive head in a gesture of ambiguous longing.

Viewers are also asked to consider how self-portraiture differs from rendering an external other. This is ultimately an exhibition about human pain, so, to put it another way: How does depicting one's own pain differ from depicting the pain of others?

The most literal expressions of pain come in large-scale watercolors by Moody. Four portraits from the Brattleboro painter's "Fighter" series show bruised and bloody faces and intimate scenes of anguish. Moody's subjects have names, and exhibition text cites "the effects of global colonialism, cultural heritage and relationships within communities" as predominant factors in their injuries. Even with brutal themes, the soothing wash of the medium gives these works a certain degree of pleasantness.

Hall's "Icon" series features nearly 30 small-scale encaustic portraits of invented people of different ages, races and religions. The Burlington artist's "community" might be read as a plea for inclusiveness. But aesthetic engagement in the watery textures and smeared visages seems more rewarding than searching for deeper meaning or political import.

Rather than looking outward, South Burlington artist Filan and Burlington/Vergennes' Sheehan mine their own experiences for extremely divergent self-portraits. Four works from Filan's "Giant Asian Girls" series place the artist as a pseudo-monstrous presence in a realm of storybook-like collage. The images, text explains, emerge from Filan's rejection of stereotypes of Asian femininity, as well as from the empowering force of the #MeToo movement.

While Filan's works are pretty, precise and easily digestible, Sheehan opts for scale and brashness. In-your-face and angry, his self-portraits are all about flaws: A scarred fingerprint, a damaged tooth and colorblind eyes emerge as signifiers for self. Overall, the works offer an emotive outburst that counters the more measured pieces on view.

"Vox Populi" takes on further dimensions when compared with the gallery's second-floor exhibition, "From Across the Distance: Select Video Works from the Barjeel Art Foundation." The three videos on view are political in self-explanatory ways, ranging from the ethnographic to the speculative, each employing built environments to construct critical narratives.

By contrast, almost all of the works in "Vox Populi" lean heavily on curatorial text that works strenuously to fit each artist's work smoothly into a post-Trump political scene — as if these portraits cannot or will not speak for themselves.

While personal identity and conversations about self versus other will always be inherently political, and sometimes polarizing, many of the works do not seem to carry the type of weight they've been assigned. Instead, the exhibition puts forth fundamental commonality as a balm for political polarization, raising what might be its most significant unanswered question: Is underscoring sameness a constructive way to grapple with difference?

The original print version of this article was headlined "Same Difference"