Middlebury College Museum of Art, with its small but impressive permanent displays and consistently strong special shows, serves as a valuable cultural resource for both locals and visitors. But that's only half of its identity. The museum is also integral to the college's educational mission.

Both aspects of the institution shine forth in "Visual Weimar: 1919-1933," a compact and compelling show that samples paintings, prints, etchings and drawings produced in Germany and Austria between the world wars. Curated by Midd students, the exhibit also includes students' computer animations of selected pieces, which visitors can view on iPads provided by the museum.

German professor Bettina Matthias offered background and some guidance as members of her "Weimar Germany and Its Legacies" class selected 25 of 50 works made available to Middlebury by the Sabarsky Foundation in New York City. But, Matthias says, "I didn't want to dictate what the exhibit should be." She finds that young people don't automatically open up to a body of work she describes as "sometimes gruesome and very, very dark."

The Weimar Republic comprised a troubled and ultimately tragic interlude of democracy bracketed by Germany's humiliating defeat in World War I and the rise of Nazism. Hyperinflation combined with stark inequality left many Germans wretchedly poor. Some turned to prostitution or thievery to survive, while the partying of the upper classes was increasingly characterized by desperation and outright depravity.

Most of that's shown here.

Viewers will likely regard a woodcut and a lithograph by Käthe Kollwitz as the most disturbing pieces in a show filled with unsettling images. In "Hunger," a mother with shriveled breasts and a skeletal chest sits with her mouth agape and her fingers tearing at her eyes. A bony baby rests listlessly on her lap. Alongside this grotesque rendition of a pietà hangs Kollwitz's print of black-caped Death snatching two children, one of whom appears to have surrendered to her fate, while the other glances in terror at her abductor. 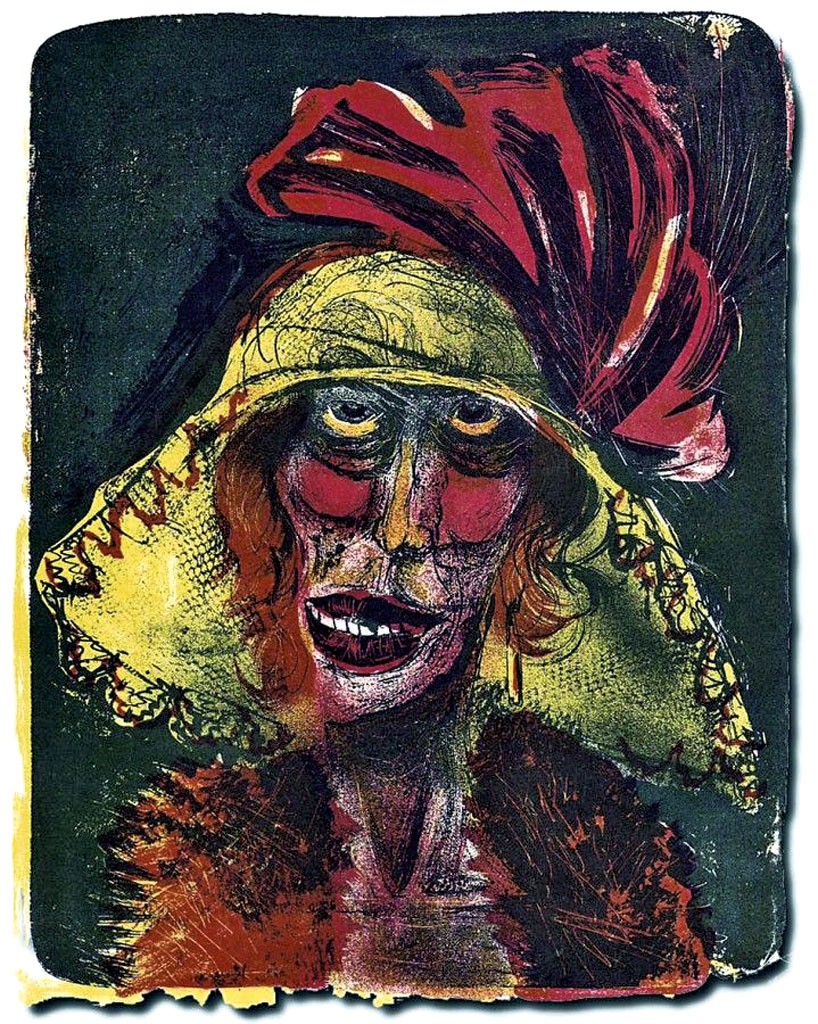 Otto Dix's etching of a suicide scene would be equally macabre if it weren't so weirdly comical. A hat and coat hang neatly from a hook on one side of a narrow room, while a man wearing glasses hangs from a noose on the other. His tongue lolls from his mouth, and he appears to be sporting an erection. In the middle sits his ghost, smiling and reading a newspaper.

Despite such images, "Visual Weimar" isn't relentlessly bleak or tormented. A few works express a degree of hope or depict mundane, everyday scenes.

In "Hammer und Sichel," a brush-and-ink drawing by George Grosz (1893-1959), a mustachioed man joyfully thrusts his arms toward a sun emblazoned with the hammer-and-sickle emblem of communism. That ideology's promise of working-class deliverance held great appeal in an era stalked by starvation and fascism. Neither Grosz nor the worshiper depicted in this 1925 work could have known that what they were seeing would prove to be a false dawn.

Viewers can witness a moment of genuine tenderness in Max Liebermann's etching of a woman knitting while nearby a child rests on a bench. Dix's "Leonie" likewise offers relief in the form of a mauve-cheeked woman in a floppy, feathered hat with a crooked, toothsome smile.

The exhibit includes a sidebar of works associated with the Bauhaus, an art school and production center whose lifespan coincides with that of the Weimar Republic. Its comparatively austere style is just as engaging as the expressionism practiced by the artists represented in the show's main section. The minimalist look developed by Bauhaus architects, designers and painters has also proved more enduringly influential. The geometric shapes in Lyonel Feininger's "Fisher Boats" and the curves and protrusions of a sculpted head by Oskar Schlemmer offer examples of the Bauhaus aesthetic.

The pieces included in "Visual Weimar" come from the trove of works of that period owned by the Sabarsky Foundation. In an effort to make its holdings accessible to a wider audience, the foundation has offered Middlebury the opportunity to choose pieces to be displayed in three shows at the college's museum. This initial exhibit will be followed next year by "The Naked Truth: The Body in Early 20th-Century Germany and Austria," and in 2016 by "Bloom and Doom: Visual Expressions and Reform in Vienna 1900."

Artist and Middlebury alum Jordan Jones assisted students in creating the animations of selected works in "Visual Weimar." A sampling can be seen at museum.middlebury.edu/exhibitions.

"I was incredibly proud of my students," Matthias says. She notes that while assembling the show and working out the process of making the art move, the members of her class communicated exclusively in German. The students must, in turn, be proud to attend a college that so effectively and creatively integrates its museum into its curriculum.