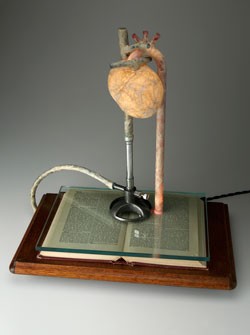 An exhibit titled “Unbound” might include just about anything, as the word implies a jettisoning of restraints. But in the third annual show of that name at Woodstock’s ArtisTree Gallery, the artworks are confined to a single concept: that of the book. While that frames the definition of “bound,” the “un-” aptly conveys that the show invites wild abandon within its parameters. Accordingly, only a few of these 56 pieces adopt the actual format of a thing with pages sandwiched between two covers.

“Unbound” began as a visual-art corollary to the town’s Bookstock, an annual literary festival that takes place in July. “We needed a good summer show,” explains gallery director Adrian Tans, who began his job the same year that ArtisTree grew out of Purple Crayon Productions, in 2010. (The community art center now offers visual art and performance classes for adults as well as children; it will soon relocate to more spacious quarters up the road.)

Not only was a book-arts exhibit apropos during Woodstock’s wordy weekend, but it’s a medium that apparently has tremendous allure for artists. So much so that a statewide organization exists in its service: the Book Arts Guild of Vermont. In other words, there is always a lot to choose from for this juried show. This year’s juror, Erin Sweeney, is an accomplished book artist herself, and the proprietor of Lovely in the Home Press in southern New Hampshire.

Sweeney wisely chose a broad spectrum of artworks for “Unbound,” which is displayed in four small rooms on two floors of the cozy ArtisTree Gallery. There are pieces that do astonishingly precise things with actual books — folding, cutting and boring holes entirely through them. There are papier-mâché, cast resin, bronze, collage, cement, tree bark and a variety of mixed media. There are even dried pears and a human organ made from sausage casing. Let’s just say that very little about this exhibit concerns the literal act of reading. Except titles, which can sometimes speak, well, volumes.

A case in point is Kevin Lucey’s “Uneven Valley Graves.” At first glance, the piece is straightforward enough: two altered hardcover books, hung in parallel with their fronts flat to the wall. A roughly bean-shaped trough has been gouged from the center of each off-white cover. Lining the crevices and spilling from them are tiny, balled-up pieces of paper, gray on one book and white on the other. Registering the title, this viewer’s mind went to the mass graves of the Cambodian (or any other) genocide, imagining hundreds of skulls emerging in ghostly revolt. That may not be at all what Lucey intended; either way, it’s a quietly thought-provoking piece.

First-place winner “Knowledge Inc.,” by Ania Gilmore, is an altered book in entirely different form. The carefully folded pages of a large book, sans covers, fan out 360 degrees, and onto each page Gilmore has stitched a long, black thread. The finished piece resembles a lampshade with hair dangling from it, but somehow “Knowledge Inc.” surpasses this prosaic description and, ensconced on a pedestal, has a rather grand, oracle-like presence. Regardless of interpretation, it’s an exquisitely made work that clearly required immense patience and, yes, knowledge.

Those pear-slice pages appear in Adele V. Sanborn’s “Hope is...,” after a poem by Emily Dickinson. Its words are inscribed on the slices, which appear to have been cut à la paper dolls, dried and collaged; they extend accordion style from a papier-mâché pear at the entrance of a delicately crafted and collaged birdhouse. The house’s “attic,” open at the front, reveals a bird’s nest containing two eggs tucked beneath the pitched roof. Though the house motif is recurrent in book arts, Sanborn’s elegant execution elevates her piece well above the commonplace.

The least expected, and least bookish, work in “Unbound” is Dawn Howkinson Siebel’s “Heart/Heat Vol. 5,” which garnered third prize. It does incorporate an entire book, though — a dictionary opened to pages that include the words heart and heat — and weighted between a wood base and a thick slab of clear glass. On top of this sits a science-y apparatus of mysterious function. From a vintage metal laboratory stand, a tube extends vertically to hold up a heart — not a Valentine, but a more-or-less anatomically correct model formed with sausage casing. Another tube U-turns from the heart and shoots back down to the glass. Both the heart and tube are illuminated from within. Siebel’s work is a bizarre enigma, but so engaging it scarcely matters how one is supposed to “read” it.

While “Unbound” holds so much more, this space does not, so fans of the genre will have to pay a visit to ArtisTree for the latest word on book arts in Vermont. It’s worth perusing.

The original print version of this article was headlined "Word Up."